The numbers, they are ugly.

Share All sharing options for: Mining the Box Score: Failure to Launch

PREFACE: Football numbers don't reveal as many secrets as basketball numbers do.  But they do reveal something. And my doctor says poring through box scores is a healthier activity than drinking. 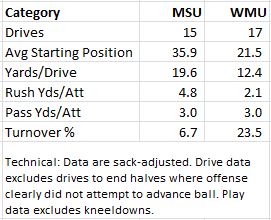 The offense: not much of it, there was. Well, they ran the ball OK, so there's that.  Take away the fumble and it was a solid debut for Jeremy Langford as the feature back.  He and Nick Hill both averaged 4.7 yards per carry.  Riley Bullough only averaged 2.4 yards on his 5 carries; he may be a work in progress as the big-back option.

The passing offense?  Well, it basically didn't exist.  118 other FBS schools played a football game this weekend.  117 of them averaged more passing yards per attempt than MSU did.  The 118th team played Alabama.  You really can't overstate how poor a performance this was.  The quarterbacks threw the ball poorly.  The receivers didn't catch the balls that were thrown well (6 drops by one of the beat writer's count).  Major culprit: Bennie Fowler, who's been demoted in favor of MacGarrett Kings.  A fifth-year senior shouldn't still be struggling to this kind of degree.

Even if you give the QBs completions on the drops, though, you're still only at like a 60% completion rate and maybe 5 yards per attempt.  That speaks to poor play design, as much as anything.  Where are the downfield throws?

The pass-blocking wasn't great, but was a little better than it was most of last year, I think--particularly when you consider it was shuffled up due to injury.  The box score says the line only allowed 1 sack and 4 QB hurries on 38 dropbacks.  Some of that's because the throws attempted were too quick/short, but it's not like the quarterbacks never had a chance to make a play.

Overall offensive disruption percentage: 19.5%.  That's decent, but not spectacular given the level of opposition.  The MSU offense came in under that number 6 times last season.

For all the rhetoric from the coaches about looking for a "playmaker" at quarterback, the two guys who played managed to make a grand total of two plays of 15 or more yards: a 26-yard pass by Andrew Maxwell (that was mostly Fowler YACs) and a 16-yard run by Connor Cook.  (Major missed opportunity, for both the offense generally and Cook specifically: The poor throw by Cook to the wide open tight end off play action.)

Really, this could not have gone more poorly--outside of avoiding any QB turnovers, I guess.

The quarterbacks: Compare them, we must. (Writing headers in Yoda-like format, I am.)  In even-more-depressing-table form: 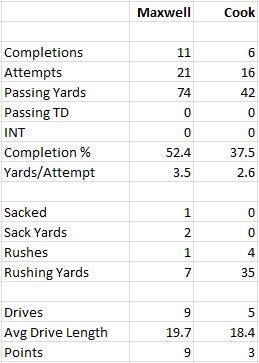 I've excluded the drive that consisted only of successful Langford rushes and then a Langford fumble.  I think Maxwell was in for that one.  Other than the Cook rushes, there's nothing there to hang your hat on.  At all.

If you really want to stretch things, you could point out that only 1 of Cook's 5 drives was a 3-and-out, whereas 3 of Maxwell's 9 drives ended without a first down.  Cook does bring another dimension--a dimension the two QB options we didn't see would also bring.

The QB debate has been discussed ad nausem, of course.  I will merely defer to the quite sensible statements of others.

So now the focus is on the personnel changes coach Mark Dantonio needs to make. But I wonder if it should be more on the things his people are doing.

MSU worked on some option stuff in the off-season as a change-up and probably didn't want to use any Friday, but a 28-yard field-goal drive led by Connor Cook featured one. And the Spartans actually looked competent for a minute.

That was the second-best possession of the night. The best was a 69-yard, hurry-up drive led by Andrew Maxwell for the Spartans' lone offensive touchdown. In both cases, MSU stepped away from the straight-ahead, pro-style attack Dantonio favors - an attack that only works if you can win decisively at the line of scrimmage and get open in the secondary.

Speaking of options, they all have to be on the table. I imagine Maxwell starts next week, but I do think Tyler O'Connor gets a look. Just my guess, but I'm figuring Maxwell and Cook were always going to be the only two available against WMU. You have to give quarterbacks a chance to get in rhythm, though neither of them did. Don't think we see Terry yet, but we may have to.

I really think MSU needs to hurry things up more. The only offensive touchdown came in a two-minute drive. Just like last year, MSU more often got in a rhythm when they weren't huddling and just stuck to reacting, rather than slowing it down and thinking. I know hurrying-up to a three-and-out doesn't help your defense, but they're going three-and-out anyway. More pressure needs to be put on opposing defenses, whether that's stretching the field, hurrying up or both.

Oh, and going for it on 4th-and-1 in opposing territory when you have a defense you can trust and you're trying to find rhythm on offense kind of seems like a good idea.  (My resolution for the new football season: Whenever a team punts, I will refer to it as "turning the ball over on a punt."  After all, the term "turning something over" usually implies a voluntary decision.)

The defense: Love it with all our hearts, we do. You really can't play defense any better than that.  Three yards or less per play against both the run and the pass.  Four turnovers created.  Two touchdowns scored.  Only two Western drives went for more than 30 yards--and one of those was with the backups in on defense at the end of the fourth quarter.

The team's defensive disruption percentage of 43.2% was nearly 10 points higher than last year's peak number (34.5% vs. Eastern).  On 2 of every 5 plays, the MSU defense tackled a guy behind the line of scrimmage, hurried the QB, knocked a pass down, or created a turnover.  Beast mode.

And this was an across-the-board effort.  Eight different players were credited with at least half a TFL, 9 different players defended a pass, and 6 different players hurried the QB.  Marcus Rush led the way with 5 disruptive plays. Max Bullough posted 2.5 TFLs.  Darqueze Dennard broke up 3 passes.  And I haven't even mentioned any of the players who created/recovered the turnovers.

The defense looks every bit as solid as last year's, and appears, based on just one game of course, like it's able to make game-changing plays to bail the offense out, which it struggled to do last year.  Let's pleeeeease not waste this defense on another 7-win season.

Special teams: Competent, they are. Six of 11 punts dropped inside the 20 (Mike Sadler for Heisman).  Two converted field goals (both short-ish).  Average kickoff of 62 yards.  Solid kick coverage.  And a 33-yard punt return, with like blocking and everything, to boot.

Penalty Watch. Not good.  Six for 75 yards, 3 each on the offense and defense. And Western declined 3 other MSU penalties.  Not a clean start, fellas.

Thinking Outside the Box Score. Hey, it's 2013.  Maybe have someone who knows something about weather patterns watch a radar and give everyone like a 10-minute notice on when lightning might hit and then afterwards check whether it's all passed so everyone doesn't have to stand around for an hour afterwards staring at the sky.

One more depressing chart for the road. The passing offense since the start of last season: 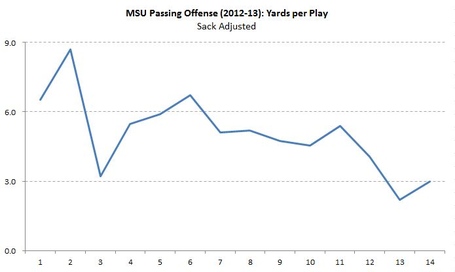 It's not all Andrew Maxwell's fault.  But this isn't working.  They've got to try something else.