The USF Offense and Creating a Massive Car Wreck

A brief look at the USF offense and what MSU can expect this Saturday.

Share All sharing options for: The USF Offense and Creating a Massive Car Wreck

Not only is South Florida unconcerned with your stacked front, they openly court it. When one of your safeties walks down into the box, USF greets them, gives them a hearty handshake, and asks if they have a friend they'd like to invite as well. In a time when more and more coaches have adopted the philosophy of 'spread it out', South Florida would like to duel you in a cube, a small 5x5 yard room where it's just you and them son, and much as they'd like to tell you different, ain't both of you gonna walk outta that cube alive.

From what I can tell, Willie Taggart's primary goal on offense is effectively to create a 19 car pile up on one lane of the highway, send a speeding car racing down the other lane of the highway, and then speed a semi-truck outfitted with a massive cow-catcher bolted onto the front through the waiting wreckage.

Priming the pile up.

You can't have a big pile up without lots of cars in one place. So Taggart, using the power of the offense to dictate defensive alignments, creates traffic.

This is the first offensive play of the Willie Taggart era at the University of South Florida. I repeat, this play, 1st and 10 from his own 20 yard line, is the very first impression that he wants his USF offense to make upon the college football world. 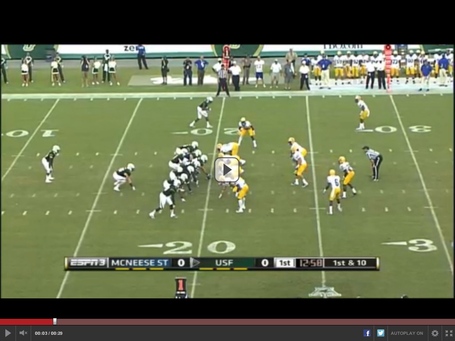 The first thing about USF is they will make you defend gaps. A lot of gaps.

Here is what the standard five man offensive line presents a defense as far as run gaps. This is what a defense, at minimum, has to deal with on essentially every play (excepting rare unbalanced lines and obvious passing downs): 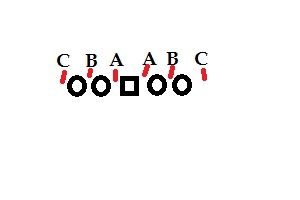 And this, is what USF came out with on their first play. 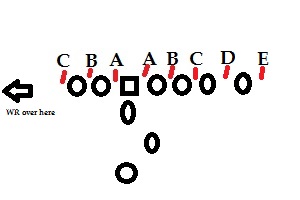 The addition of the fullback also allows the flexibility of creating an additional gap on either end of the line if USF so chooses, like so: 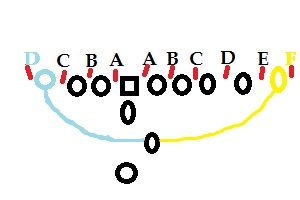 A quick thought on a positional quirk

(Sharp-eyed commentator SpartyFever corrects me here, see edits later, the positioning of this role is still interesting in how it compacts defensive players, but clearly the role is more freely utilized in the passing game than I first thought. The lesson is I need to watch these little 11 second play clips between 1 to 18 more times before hitting 'publish'.) USF technically deploys two WRs in these plays, but only one of them is truly playing the role the way we'd recognize it. 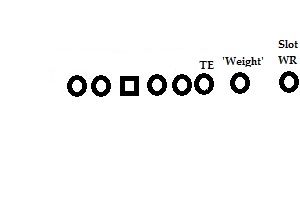 The other is not quite a tight end, not quite a slot receiver, a role free to be played by either tight end slot receiver played by 6 foot-ish, 200 pound-ish receivers on both of these plays. He stands a couple steps off of the TE, not as far out as most slot players. I'm going to call this player the 'Weight', as part of his primary purpose seems to be to compact the opposing defense into the box  and press down on them off this outside edge. Though the Weight is obviously available and willing to catch a pass, the primary role the position takes, at least in these two scoring plays is sucking in the other cornerback, attracting safety attention, and freeing up the focal point of the play to make things happen. He also is free to be targeted for passes as we'll see later.

Back to the play 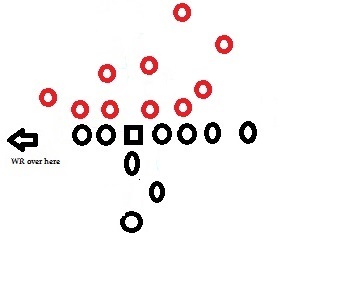 So again, this is his first play from scrimmage. And this isn't gonna be anything fancy, but dangit, it's going to get the job done. The call is a dive off the right A gap, that cuts back and hits through kinda the left A gap or maybe rather, where the center began the play. McNesse State is almost in a 6-4-1 or 6-3-2 formation.

Because the defenders are spread out along so many possible gaps where USF could send the running back, the Bulls are able to pick and choose just where they want to strike. And when the do, they use two linemen and the FB to overload a single gap and clear a path for their running back. 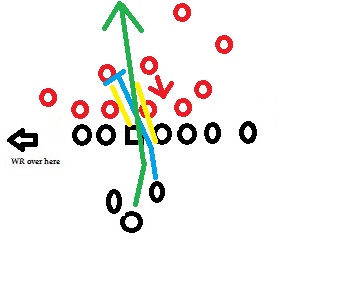 The lane is simple. The center caves in the left side of the hole, the right guard holds down the nose tackle on the right side, and the fullback crushes the linebacker who comes to fill the hole. The other linebacker is too busy covering his own gap to help out.

I believe the free safety blitzes off left tackle and can't reach the RB before he hits the hole. The 'Weight' blocks his corner and attracts the strong safety. The outside WR sorta blocks his CB long enough for the RB to get past him, and then the RB just outruns the two CBs to the end zone 80 yards away. 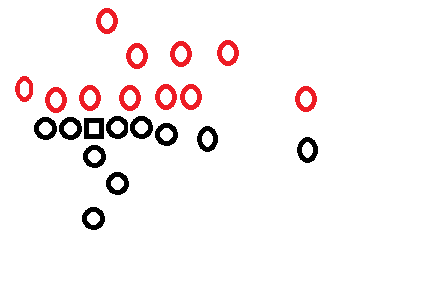 This is a passing play, and if the previous play was running the speeding semi straight through the pile-up, this is clearing out the other lane for the sports car.

This time the 'true' outside wide receiver and the 'Weight' are lined up on the same side of the field. Same as the first play, USF lines up in a formation that creates seven run gaps plus a fullback on this 3rd and five, and faces a similar, almost 6-4-1, formation as it did on the first play. But as South Florida can get favorable running conditions from jamming the box full of players, so too can they get favorable passing situations. 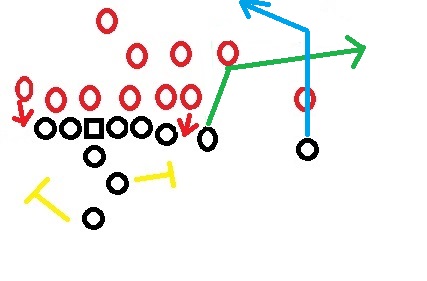 USF max protects against a six man blitz with eight blockers and sends out just two receivers. But if you ask me, it's really more like just one receiver, who's put in a very favorable situation. (SpartyFever points out I don't pay enough attention to these receivers as they're lined up or as they exit the camera frame. It's McFarland on the outside and Davis on the inside, in the 'weight' role. Whoops.). Mike McFarland, who plays 'Weight' on this play is a 6'5, 244 pound TE who has seven career catches in 23 career games. It seems to me that his job is to attract the attention of this free safety at all costs, and isolate the outside WR, Andre Davis, USF's leading receiver last year, in one-on-one coverage with the CB. The outside receiver, the 6'5, 244 lb McFarland runs a post or slant-type route and the 'Weight' player, Davis, the team's leading receiver last year, runs an out-type route, the two likely crossing close to each other and setting a 'pick' to help free Davis, as SpartyFever noted.

This works to perfection, and even though pass protection is very shaky, back-up (now starting?) quarterback Bobby Eveld manages to evade the rush long enough to deliver the ball to Davis for the easy TD.

A note of caution

Before I paint the impression that Taggart and USF hopped out of a 1980's time machine and got to coachin', South Florida's second TD was a 59 yard catch and run on 4th and 1 that. came out of a 3 WR shotgun formation, and they threw the ball twice as much as they ran it against McNeese State (though, that might have had something to do with them being down 3 touchdowns for much of the game).

To lift some further analysis from Steven Godfrey's excellent profile of Taggart and his preparation taking on another elite defense last year (Alabama):

The quick primer: WKU's offense is simplicity swimming in deception. H-backs and tight ends -- namely "Mr. Reliable," senior Jack Doyle, who led the team in receptions and receiving yards in 2011 -- support a downhill power running game mixed with zone runs (like Alabama's), and senior quarterback Kawaun Jakes often enjoys throwing out of a steady play action. Before the snap, they'll shift and/or motion their backs and ends for a variety of reasons, according to Taggart -- it disguises their plays, it sometimes exposes if a defense is showing man or zone and it allows for successful, simple plays to be run multiple times without a defense noticing before the snap.

So, lots of things MSU does, but Taggart seems much more pumped to come out in these sorts of super-heavy looks, even on 1st and ten or 3rd and five, whereas MSU has been mixing in much more 3 WR looks and shotgun as the Dantonio era has worn on.

can be viewed here.

USF and Taggart really do remain committed to a style of power, under-center, offense that is becoming harder and harder to find, even in the Big Ten. It's certainly an interesting change-up from Western Michigan's uptempo spread from last week. Obviously, I'm pretty confident Dantonio, Narduzzi, and company can solve the unit that scored just 21 points vs their Division II opponent, but with the team having much more success after a second half quarterback shift, you can't ignore the possibility of a revitalized USF coming into Spartan Stadium ready to pound the ball behind these massive lines, get their wideouts into one-on-one coverage deep, and see what happens.