The 2014 Michigan State basketball team will need to improve significantly to meet preseason expectations. There are some good reasons to think they will.

So the football bye week and the start of basketball season couldn't have come at a better time, I'd say.  The earlier start to basketball practice is, I think, a good thing from two perspectives.  There's the distraction factor, and after two long months of quarterback hashtagging we could definitely stand for some distraction.

And there's the hope that an earlier start to practice might help break the long tradition of Tom Izzo-coached teams struggling early in nonconference play.  MSU has often struggled in the role of preseason favorite.  Starting the season at a higher baseline of performance, and applying the Izzo midseason improvement magic to that baseline, would go a long way toward meeting the expectations that will come with a top-3 ranking this season.

Looking at the team's statistical profile from last season, there's a lot more room for improvement on offense, where the team ranked #24 in the nation, than on defense, where the team ranked #7.  (And replacing the team's one departing contributor should be relatively straightforward on defense.  Derrick Nix was a solid post defender who didn't foul a lot, but he wasn't dominant on the defensive glass and didn't make any real contributions in terms of blocking shots or creating turnovers.)

The good news is that there are a multitude of plausible individual avenues for boosting the team's collective offensive efficiency.  Scatterplot: 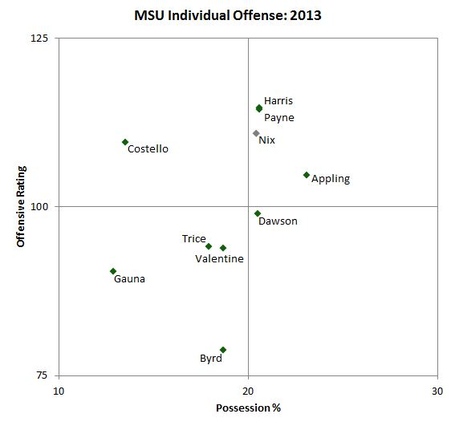 The team's two offensive stars--whose datapoints are indistinguishable above--could both boost the number of possessions they consume on offense by a couple points.  Gary Harris should, knock on wood, be healthier this season, allowing him to be more aggressive in attacking the rim over the full season.  And Adreian Payne showed much more consistency in his offensive assertiveness in the second half of last season.

Denzel Valentine and Matt Costello give the team two more candidates for sophomore leaps. The transition from the freshman to sophomore season tends to show the greatest gain in efficiency, across all talent levels.  My favorite offseason statistical factoid: KenPom has Evan Turner as one of the comps for Valentine's freshman season.  Valentine just needs to reduce turnovers; beyond that, he seems poised to contribute across the board.  Costello, meanwhile, just needs to maintain the same level of efficiency, or something near it, in an expanded role.

There's a similar offseason-leap hope for both Branden Dawson and Travis Trice, given that Dawson missed basically the entire offseason last year with his knee injury and Trice missed a good chunk of it due to illness.  Both have now had a full offseason to work on the weaknesses that have held back their offensive efficiency levels to date.

This team's core of seven returning players (removing Russell Byrd and Alex Gauna from the scatterplotted group) will, in a practical sense, consist of two seniors and five sophomores.  The only guy who we'd be stretching to impose higher statistical expectations on is Keith Appling, and there's still the scenario where he pulls his jumpshot together this year, which would boost the rest of this game.

There are some question marks at the bottom of the playing rotation, but there shouldn't be much need to give freshmen minutes, unless one of the freshman is playing at a relatively mistake-free level.

Offseason analysis is always subject to a certain level of irrational optimism.  In this case, though, I think we have some pretty rational footholds to grab a hold of.  We'll start to see whether our optimism is fully justified soon enough: less than one month until the first preseason game, less than six weeks until the first regular season game, just over six weeks until the showdown with John Calipari's kids in Chicago.  Bring it.