Jeremy Langford and a Shiny Bit of Hope

Jeremy Langford had a pretty spectacular debut at RB this past weekend against WMU. The singular bright spot in another extremely disappointing offensive performance.

Share All sharing options for: Jeremy Langford and a Shiny Bit of Hope

Originally I was going to write a comparison piece of the quarterbacks and try to sort through that business. In doing my homework this afternoon though, the MSU blogosphere and message boards seem oversaturated with that. So I'll skip it with the exception of the picture below. 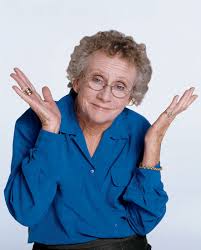 So we move on to the positive on Offense from Friday night?

There was no positive. Only sadness and an iffy inclement weather evacuation plan.

I actually don't agree. The evacuation plan of Spartan Stadium is flatly terrible. Shove everyone out in the concourse and then force them out of the stadium to IM West(on the West Side of the Stadium). Luckily Friday night's thunderstorm was an annoying severe thunderstorm that's over in 10 minutes. If there had been an actual tornado you would have had thousands of people climbing all over each other in the stairwells to get out. After they get out they would then be totally exposed on their walk to the evacuation spot.

I was talking about Jeremy Langford.

Oh yes that. As much as I hate to pick on KJ,(I actually enjoy it quite a bit) this is an understatement.

The offense: not much of it, there was. Well, they ran the ball OK, so there's that.  Take away the fumble and it was a solid debut for Jeremy Langford as the feature back.  He and Nick Hill both averaged 4.7 yards per carry.

There were seven total plays of more than 10 yards on Friday night. They were as follows in order of yardage.

Jeremy Langford had more plays for 10+ yards than both QBs combined. More importantly, Langford's YPC by quarter was 2.5, 3.6, 7.5 and 6.3. He was getting better as the game went on. Upon further inspection, this is a much better debut than I thought I saw from Langford on Friday night.

And there was bunches of this... 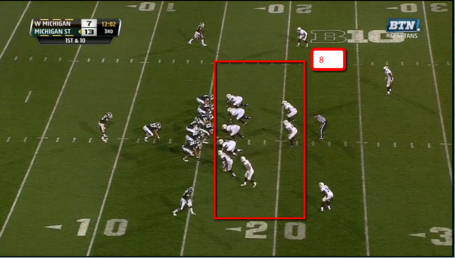 Obviously by halftime Western knew they only had to do a pretty half-ass job defending the pass, so they were loading up eight guys on the box on the regular. On Langford's four 10+ yard runs, three of the four were between the tackles and all were in the second half. For a guy who was billed as a speed back to be running between the tackles and breaking linebacker tackles the way he was is pretty durned impressive.

Langford's improvement from the first quarter to the fourth was extremely impressive. He was running solid between the tackles, but also had the speed to take it outside. He was waiting to read his holes and then zipping right through them like they were nothing. He was one fumble away from a perfect debut game.

Did the Offensive Line improve from last year?

In terms of run blocking, the MSU Offensive Line has absolutely improved. When the guards were trapping they were getting to the defender on time(which seemed to be a big problem in years past). Pendleton was doing a great job taking on and blowing up a linebacker.  I think the run game was starting to gel towards the end of the game.

What did you say?

I said the run game looked significantly better in the second half despite the fact that MSU's quarterbacks were playing like they had noodles for arms. MSU's ypc in the second half improved from 3.48 to 5.14, which isn't too damn bad if Western always knows what's coming. If MSU can relieve some of the pressure on the run game with passable quarterback play MSU could have a pretty decent run game this year.

What do we expect this weekend then?

The Langford Pain Train Baby! WOO WOO! While Langford had a really great debut game, the passing game has to improve or he'll be looking at eight and nine man fronts all year. He did much better than expected but probably can't Le'Veon Bell his way through the season. This weekend he's going to put up some gaudy numbers.

So while I see the fledgling beginnings of a run game that can set up the pass, the pass will still need to help out a bit. This week should be a good chance to see what harmony the MSU offense is capable of achieving against a really terrible USF defense(gave up a record 53 points to a non-FBS school).

Give Langford some space to breathe and I think you might find you don't miss Le'Veon Bell as much as you thought.