The USF Defense and Too Much, Too Soon.

Share All sharing options for: The USF Defense and Too Much, Too Soon.

The tale of USF's defensive coordinator is a curious one. New South Florida head coach Willie Taggart played offense in his college career, and has coached the offensive side of the ball his whole coaching career, so it's worth placing extra focus on the man he chooses to lead his defenses. It is not Willie Taggart's former WKU DC Lance Guidry, who Taggart either did not choose to bring along with him when he changed jobs, or who chose to stay and coach WKU through their bowl game, hoping to impress enough to win the coaching job for himself. Guidry did not win the job (it went to major scumbag/excellent football coach Bobby Petrino instead) and the now displaced coach was able to find work as the defensive coordinator at (haha, whoops!) McNeese State, the D-II team that just got done pistol-whipping South Florida.

You'd imagine Taggart had candidates lined up to replace Guidry, and indeed he did. But the one he picked was a bit of an, uh- How do I put this? Bit of an odd hire. The man selected to lead the Bulls defense was Chuck Bresnahan, who brings a couple nice qualities and a couple very concerning qualities.

The primary reason is seems like Taggart would want to hire Bresnahan is the National. Football. League. Bresnahan has been coaching for about 30 years, and about a third of those years were spent working in the NFL including defensive coordinator stints at the Raiders (2000-2003, 2011) and Bengals (2005-2007). He was an NFL coordinator and not just that, a NFL coordinator who coached in a Super Bowl, and arguably came within a terrible call of coaching in another (see: Tuck Rule). These are things that will still get ears to perk up on the recruiting trail and typically imply a certain level of competence.

So why is he not still coaching in the NFL? Wellll (from our friends at Voodoo Five):

I looked up the DVOAs (defensive value over average) on Football Outsiders for all of Bresnahan's defenses during his eight seasons as an NFL defensive coordinator. Zero is a perfectly average defense, and the lower the number, the better.

Not really awe-inspiring stuff. Yes, he was the defensive coordinator on four playoff teams, including one that went to the Super Bowl, but you can't say any of those teams got there because the defense made it all happen.

Then there's his recent resume before the move to USF:

Hey the Raiders! That's not so bad!

Wait. What is a Florida Tusker?

Yeah, it's like a D-League football team kinda, they-

Were they any good?

Well, they made the championship game.

But also there were only five teams in their league, the UFL. Also, the team moved to another city after the 2010 season.

Also a UFL team. A different one. To preempt your question, no they were not any good in 2012.

Is that uh, is that twenty year gap away from college football gonna be a problem for him and USF?

I think so! Let's take a look at why.

Welcome back to college.

There was a time when shotgun was a formation that everyone primarily passed the ball out of. Yeah, there were draw plays and delayed hand-offs and the like, but it used to be that the point of sticking your QB five yards back there was to negate the pass rush and let him see the field better. Not anymore, especially not at the college level.

Now lots of teams will come out in shotgun, with three or four wide receivers, not to primarily throw, but to primarily run. 1st and 10, 2nd and 7, and these teams are going to run outside zone and power and counter-traps and all the run plays you're used to out of pro-style looks and if you don't respect that, you're toast.

Now, you consider that, then take into account that McNeese State is at 2nd and 1, and you need to think about how their offense operates and question what you're doing.

This is McNeese State on this play: 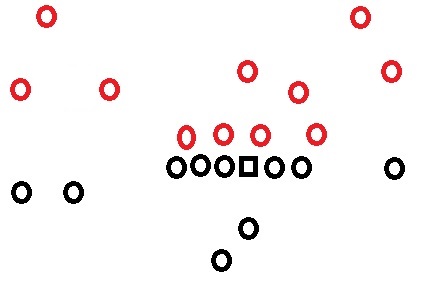 A bubble screen or a similar quick throw to one of these left side wide receivers would seem to be a pretty easy first down. The cushion the two defenders are giving up isn't as bad as it first looks, simply because the wide receivers are lined up a couple yards behind the line of scrimmage. But's it's exceedingly unlikely that they'd be able to stop a quick pass behind the LOS from getting one yard out to the 6 yard line and picking up a fresh set of downs.

But why get 1-4 yards when you can get the touchdown right now? This is a running down, and whether or not Bresnahan is used to this, this is also a running formation. USF is not aligning to respect that, and they're going to get burned.

First is just the numbers issue. Let's count 'em up: 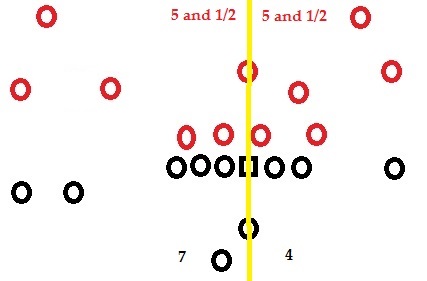 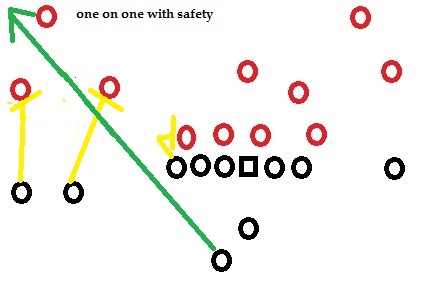 Look at how simply with three easy blocks McNeese can get into an extremely advantageous situation. And this is just in the world of little theoretical  O's in a paint program. In the actual play, things go much worse for USF. 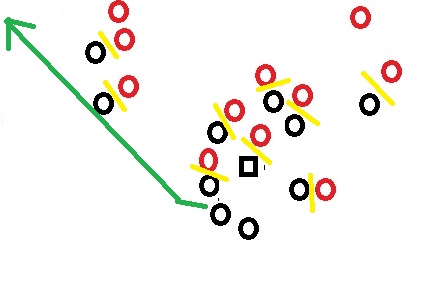 The RB heads towards the line and, whether by design, or by instinct, cuts out to the left side of the play where there are essentially no defenders. Both linebackers in the middle of the field have over-pursued and eaten blocks. The slot wide receiver blocks the backpedaling LB who looks surprised to be hit. The WR cuts off the safety near the goal-line. Leaving just the corner back between the RB and the pylon of the endzone. Does the running back score? Haha, of course he does.

I mean, FFS USF, even if this is a passing play who exactly is supposed to cover the tight end? The outside linebacker? And the safety takes the slot guy, and the CB takes the outside wide receiver, and the MLB gets on his horse to cover the RB out of the backfield and then the guy to stop the QB from tucking the ball and running is... No one. This defensive alignment is unsound vs a modern offense. Heck, it's unsound against an offense from back when Bresnahan was last coaching college ball. It's just numbers. You know what that safety in the upper right hand corner does on this play? Not a damn thing. You know what the middle linebacker does? He bites on this RBs initial counter, eats a weak block, and is way too late getting to the play-side of this run. And oh man, can you imagine if McNeese had decided to involve the QB in this running play and run a speed option or something? #Pray4Bulls.

Bresnahan has spent the last 20 years coaching professional football players. Even the worst professional players were some of the best college players, so there's a certain high level of things you can do, even when you're coaching, say, the Cincinnati Bengals. When you step back down to the college game, you may have to scale things back. Not so much man-to-man, not so much blitzing, not so many weird coverage schemes. It's common sense. But the USF DC seems willing to throw his players into the fire, even if they end up getting absolutely barbecued. Here's an example: 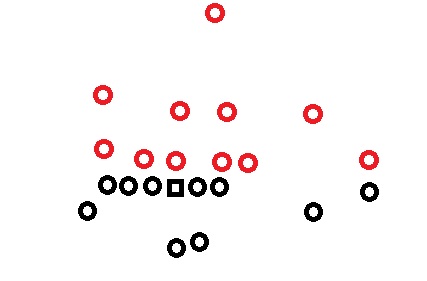 There's still an arguable numerical advantage for McNeese to the left side but it's more like 5 v 4, than the 7 v 5.5 on the previous play. So USF has correctly walked a safety down to stop help stop the run. But in fixing this, he does another crazy thing, which is play a deep, deep, safety back in cover-1 near the goal-line 20 yards away. The rest of his players will be covering in man-to-man. McNeese will ruthlessly exploit this. 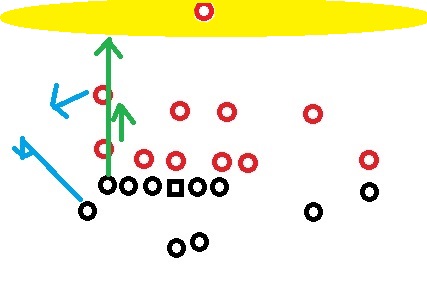 It's a simple two man combo to free up a good receiving tight end on a smaller linebacker. The H-Back runs a little diagonal route just to draw the attention of the safety. From there, the tight end runs straight down the field, past the linebacker and makes the catch near the goal-line a couple yards ahead of the USF LB tasked with covering him.

Why is this deep cover-1 such a strange decision? Well, USF's safety clearly just isn't good enough to handle the heavy responsibility it puts on him. He's the last line of defense when a defender gets beat man to man (which the linebacker easily is) and he needs to be ready to break on the ball and either deflect the pass, or hit the receiver as he's trying to make the catch. Instead, he is several yards away from the tight end as he makes the catch and doesn't even touch him before he walks the final few yards into the end zone. The throw from the QB was even lackluster enough that the TE had to slow and turn to catch it and still scored essentially untouched. McNeese chose to have its slot receiver run a similar deep route and maybe the safety was cheating towards that route, we can't see, but it seems from his positioning that he isn't doing a particularly good job covering either deep route .

The second reason it's weird is that USF doesn't even use the extra safety to attack the line of scrimmage with one, or multiple, players to help their pass rush. Instead, it's a simple four man rush that can't get there before the QB is able to throw to the open man 20 yards down-field. What do the linebackers who aren't blitzing do? Not much. One is making sure the RB doesn't sneak out of the backfield, while the MLB is just hanging out in no man's land in the center of the field. Neither is really affecting this play in the least.

One more video? Sure.

Here, USF fails to stop a shotgun running attack through the use of Cover 1 because there's nothing about two issues that combo-ing those issues together can't make into an even bigger issue.

Chuck Bresnahan, USF's DC is clearly attempting to trust his team with some reasonably advanced coverages and responsibilities right off the bat. Unfortunately, based on my limited viewing, they do not yet seem up to the task of performing these responsibilities to the levels necessary for them to be effective. Furthermore, his time away from the college game appears to have put him behind the offensive curve, and his defense looked woefully unprepared to stop some fairly basic concepts from McNeese State. When you add in the very shaky tackling and lack of a pass rush, the earliest returns on the hire are pretty underwhelming.

How much he and the Bulls defense can learn from their experience against McNeese State and apply in time for the Michigan State game on Saturday remains to be seen. But if MSU is looking for an opposing defense to rebound against, this appears to be a pretty good pick.