Hey, remember that highly-ranked basketball of ours? The one without the apparent fatal flaw and enormous controversy at a key position?  Let's talk about them for a few minutes.

There is some bad news here: Gary Harris is out at least four weeks with an ankle sprain.  Hopefully, it won't be much longer than that, which would get him back for the start of official practices.  If there's one guy that can likely deal with some missed offseason development time, it's Harris.

Going into his junior year then, the goal for Payne was simply to maintain that leap, maybe add some more explosiveness to his game, and ideally improve his conditioning (with his now-infamous small lungs providing an obstacle there).

Though the first half of the 2012-2013 season, we'd seen more maintaining than adding explosiveness or minutes on the court.  Then the Penn State game happened:

He exploded for 20 points on 9 shots, including a three-pointer in his second straight game, in only 17 minutes. Not to mention he got to the line for 10 foul shots, grabbed 7 rebounds and avoided committing a turnover.

That still left the question about conditioning, though.  The lung thing seemed to the limiting factor there.  But as it turned out, not so much: 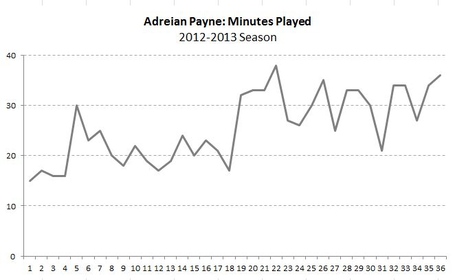 After averaging just 20.1 minutes per game through MSU's first 18 games, he averaged 29.5 minutes in the final 18 games.  He did get slightly more efficient (average offensive rating of 123.0 vs. 117.1) and assertive (average usage rate of 22.9 vs. 21.9), but he mainly contributed more offensively in the second half of the season simply by staying on the court longer (almost 50% longer). 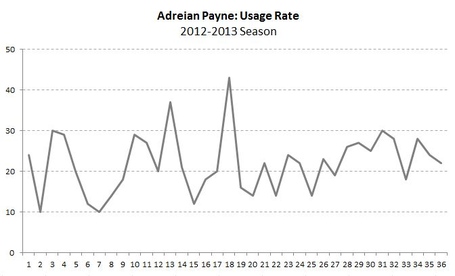 Overall, the biggest improvements in Payne's statistical profile from his sophomore season to his junior season came in three areas:

--His defensive rebounding percentage jumped from 16.9% to 23.9% as he played the largest role in filling the void Draymond Green left on the defensive glass.

--He suddenly became a three-point threat.  After having only made one three-pointer through the first 89 games of his career, he proceeded to knock down 16 shots from beyond the arc over the second half of the season, finishing the year with a 38.1% three-point shooting percentage.

Payne also fouled less as a junior (4.0 per 40 minutes vs. 5.1 as a sophomore), which played a role in allowing him to stay on the court for more minutes.

Defensively, Payne remained a major shot-blocking threat and became a more versatile defender, as he was often matched up with a smaller opposing player at the 4-spot.  While he'd still struggle at times to keep up with the perimeter shooting threats, he could make up for it with more consistent low-post scoring on the other end of the court.

After flirting with a departure to the NBA, where he very well could have been a first round pick, expectations will be very high for Adreian Payne as a senior.  And rightly so.  The offensive numbers and PT level Payne posted in the second half of the season last year translate very closely to the same overall value as Victor Oladipo's full season numbers (recognizing that Payne isn't going to be the quite game changer Oladipo was on defense).

If Payne can continue to stay on the court for long stretches and be a consistent offensive threat from game to game, that leaves Tom Izzo with only one frontcourt slot to worry about finding consistent production from.  The big pieces are in place.  The question marks are minimized.  Only two months to kill now before the season starts--with an exciting quarterback derby there to help us kill them!