If I just reposted the mini-box score from last week, would you be able to tell?  Probably not (big box): 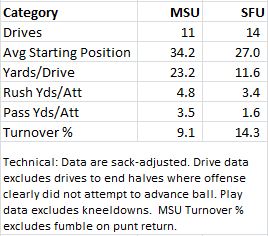 Hey, let's start with the defense this time! Other than allowing Marcus Shaw to run up the gut for long-ish gains a few times, a near flawless performance once again.  For the second straight game, the defense's disruption percentage was right around 40% (39.3% to be exact).  This is off-the-charts good.

Opposing offenses adopted the end zone, Shilique Calhoun was born in it (HT: someone on Twitter): 2.0 TFLs, 2 QBHs, 2 TD returns.  He is now tied for 5th among Big Ten players in touchdowns scored on the season.  Denicos Allen was in 2011 form: 1.0 TFL, 2 QBHs, 1 PBR.  In total, 8 different MSU defenders registered a QB hurry.

The only passing offense as ugly as MSU's is the one created by the MSU defense.  Opponents are now 24-74 for 259 yards and 4 interceptions.

You could so definitely win several kinds of championships with this defense.  As someone suggested in the comments, can we get the NCAA to score our games with Mark Dantonio's modified scrimmage scoring system?

Next up: The imperfect-but-generally-competent special teams! Sarcastic Heisman hashtag campaigns aside, Mike Sadler really has been fabulous.  He's only 6th among Big Ten punters in punting average at 41.2 yards/punt, but (1) he's punted 7 more times than anyone else so he's already passed the small-sample-outlier barrier and (2) he's dropped 10 of his 18 punts inside the 20-yard line.

Kevin Muma missed an easy one (25 yards).  He'll have a short leash with Michael Geiger waiting in the wings.  As few points as this offense is going to score, the team really can't afford to throw any away.

The punt return game continues to look functional.  Just hang to on to the dang ball, Andre Sims.

Is there another facet of the game? Please?  No?  OK, we'll talk about the offense then. Heck has already exhaustively covered all of the depressing statistical factoids about the passing offense, including the highly-distressing transitive-principle red flags.  Here are a few more to keep you sleepless tonight, though:

It just flat out isn't working.  If I had to rank the factors, I'd be hard-pressed not put to quarterback play fourth behind receiver play, pass blocking, and play design.  (Really, coaching failures have to be #1 at this point, when this many things are going this wrong.)  Which isn't to say the quarterback play has shown any signs of promise--just that it's almost impossible to evaluate the QBs given the other factors.  MSU's offensive disruption percentage was 21.5%.  Again, middling.

Per usual, Heck hammers the nail on the head:

I'm not totally sold on that post-game reaction either, but I'm still leaning more towards it than the other idea. What I am pretty sure of is that this 'middle of the road' thing where MSU is throwing the ball 30 times a game, and on 43% of downs is most likely not the optimal strategy going forward. The Spartans either need to hammer the hell out of their passing game raw materials and throw, throw, throw, vs Youngstown State in the attempt to fashion it into some sort of cutting edge, or they need to toss it off to the side and start trying some other approach. Because if you're doing basically the worst thing one of the 125 Division could do on 43% of downs you're not only being really inefficient, but you're also not really forcing your team to fix those inefficiencies through mass repetitions. If the question is "what to do?", the easiest and plainest answer I can give is, "Well, clearly not the status quo, huh?"

To their credit, it seems the shift towards a heavier run-focused attack has possibly already begun. The benching and re-benching of Andrew Maxwell was one clue. The change from 37 passes and 42 runs in the WMU game (a pass 47% of the time) to 24 passes and 38 runs (a pass 39% of the time) was another clue. That the 2nd half of the USF games featured 24 runs and 11 passes (a pass 31% of the time, or 35% if you remove the final four Nick Hill runs, with nine of those eleven passes coming from Maxwell) was a third clue, maybe the clearest given the 7-6 lead that the Spartans entered that half with.

I imagine by the end of the Youngstown State game, we'll have a fairly firm answer as we head into Notre Dame week. If Andrew Maxwell starts or gets a plurality of snaps, we're probably going to try and salvage the passing attack. If it's Cook or O'Connor (especially if it's Cook), a 70%-30% run-pass might be our 2013 offense, and (again, especially if it's Cook) is probably for the best.

Not per usual, I also agree with Graham Couch:

To MSU coach Mark Dantonio, an unacceptable blunder is Connor Cook's fumble at midfield as he tried to evade a defender. It's Tyler O'Connor's throw into triple-coverage in the end zone. It's any risk that seems reckless.

Some years, with some teams, that works. Not for this one anymore. What is reckless now is not risking every ounce of hardened football philosophies to beef up a sickly passing attack. What is reckless is to chance wasting what is shaping up to be an incredible defense, one proving it can withstand when an offensive risk occasionally goes awry.

The mistakes MSU can no longer afford are the 3-yard passes on third-and-six or the third straight three-and-out.

Dantonio wants explosive plays and points. Said so again Saturday. So he should stop punishing his young QBs for so desperately trying to give him that.

The offense is averaging 7.2 yards per pass completion, with zero interceptions thrown.  The main issue here is not overly-aggressive throws.

Which leads us to the obligatory QB comparison: 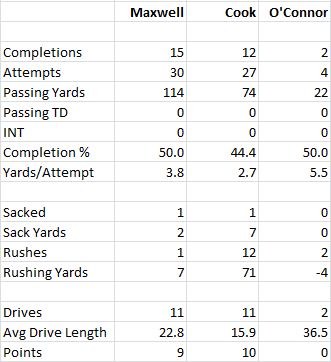 The zero in the points row for Tyler O'Connor isn't really fair since they should have gotten 3 points out of his second drive.  OTOH, the 36.5 yards/drive isn't really a fair representation, either, since most of those yards came on running plays.  Still, O'Connor was 2-3 for 22 yards on the would-have-been-FG drive.  That's pretty spectacular by our standards.

Apparently, in addition to the ill-advised throw into the endzone, O'Connor also botched the play call on QB run for a 5-yard loss.  So he's a work in progress.  (But aren't we all?)  His size and running ability do give the offense options, and you have to believe his passing accuracy and ball security would be at least as good as Cook's (who keeps waving the ball around when he takes off to run).

Obviously he's not a panacea, but I would have liked to see O'Connor get another 2-3 drives in the second half of Saturday's game, and hope he gets another crack at things vs. Youngstown State.

Maybe Chris is on to something with the up-tempo approach, but I just don't see that there are enough working pieces in the passing game to make that work for more than a couple drives per game (and am not sure going up-tempo with a focus on running the ball gives you any strategic advantage).

The Notre Dame game's a lost cause at this point.  But there are still four weeks of practice between now and the Big Ten opener (and eight weeks until the second game in which MSU should be a clear underdog, still), with the offensive line theoretically (/heretically) maybe getting healthier.  Build something around the running backs (Jeremy Langford: FAST) and the running ability of O'Connor/Cook (/Terry).  I don't think we're going to get to "average" on offense.  But there's still time to get to "functional."  It'll take major adaptation by the offensive coaching staff, though.

And I'm not buying the "Just pick one!" line of thinking.  Would people really be happy if Maxwell were getting 80% of the snaps through two games and the level of production was what it has been?  Or if Cook had played the entire game Saturday and the offense didn't score until the fourth quarter?  You can't build a football team's confidence simply be pretending you have it; it has to develop naturally.  The quarterback position is not the only problem on this team, but it is the position where the team has the most options.

Be upset about the results of the quarterback competition, not the nature of it.

Penalty Watch. Didn't get any better.  Nine for 94 yards (plus one declined).  The defense had more than the offense (5 vs. 3, 1 on special teams), though.  So I choose not to freak out about this when there's so much other stuff to freak out about.

Thinking Outside the Box Score. At least they evacuated the stadium ahead of the storm this week.  Got to spend some quality time with my kids in the IM West Turf Arena.

Finally, at least, in the midst of all this angst, we've got this guy hanging around: