They weren't really going to try it again, were they?

When Stanford came out in the same jumbo formation before and after the timeout, I didn't think there would be any chance they try a run up the middle on fourth down.

They had just been stopped on 3rd-and-2. They had been stopped on fourth down earlier. MSU wasn't giving an inch after the first quarter. Nope. It was a battle of pride on one final play.

Stanford went up the gut, and Kyler Elsworth launched himself into Spartan history. Darien Harris was also there on the stop. The two replacements for Max Bullough, Elsworth being a former walk-on, won the game on a defensive play. The final play the defense couldn't make a year ago.

All season, whenever something went wrong, this MSU team would respond. Connor Cook throws an interception against Michigan, the defense responds with three straight tackles for loss. A punt gets blocked against Ohio State, the defense gets a fourth down stop.

Cook throws a pick-six against Stanford, he takes the team down for a touchdown on the following possession. Jeremy Langford fumbles in the red zone against Stanford, the defense forces a three-and-out. Every time the "Sparty No!" tweets came out, the Spartans bounced right back. The ghosts are gone.

2014 ROSE BOWL CHAMPS! Put MSU on that plaque! Dream Big! Thank you Spartan Nation! #We are the ones! pic.twitter.com/bw7ehymnJ2

Looking back at my keys to the game.

Run the ball - They weren't terribly effective (Langford had 23 carries, 84 yards, 3.7 ypc) but it was enough to keep the Stanford defense honest. It seemed like at least half of MSU's passes came on play-action.

Protect the quarterback - Stanford did get four sacks, but just for 16 yards. The line did protect well.

Prevent big passing plays - Stanford had a 44-yard pass on the first drive, but the only other big passing play was a 51-yarder in the third quarter. MSU also had one interception on a deep ball.

Run up the middle - Tyler Gaffney broke off a 47-yard run on Stanford's second drive, but he had just 44 yards on his other 23 carries. Stanford tried to go up the middle on the final play, but was stopped. Stanford finished at 4.5 yards per carry down from their season average of 5.0.

Turnovers - Stanford got a pick-six and a turnover in the red zone, but still couldn't get the win. They also dropped two other easy interceptions. The Cardinal turned the ball over on downs twice in the second half.

Win first down - Stanford went 4-for-13 on third down, despite having some favorable down-and-distances. MSU went just 3-for-11, but they passed more on first down than perhaps they did all season.

Looking at all sides of the ball: 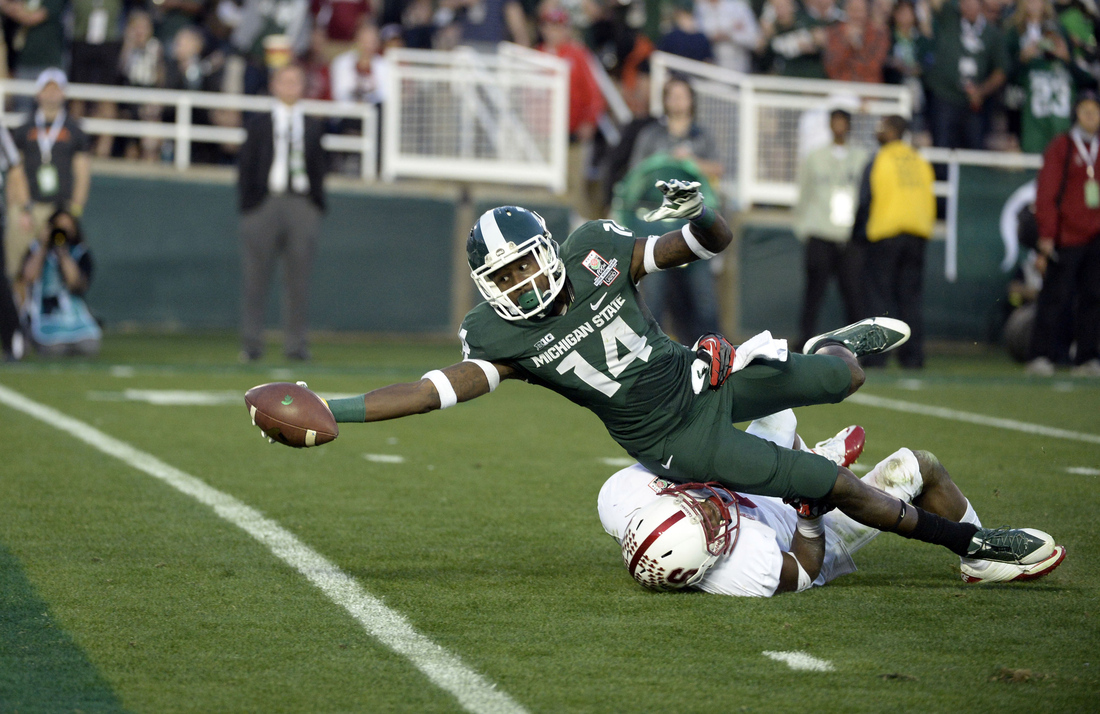 He finished 22-for-36 for 332 yards, two touchdowns and an interception. His 332 yards were the third-most ever for a Big Ten quarterback in a Rose Bowl and the most for a Big Ten quarterback in a Rose Bowl win. At times, he was on point, delivering some strikes with pressure on him. At other times, he looked like he was playing his first game of football. He didn't make too many bad decisions with the ball, but it was more than he'd made all season, and he was lucky to only have one interception. One was dropped and deflected to an MSU receiver. The Spartans would score their first TD on the drive.

Langford's number are above. He was effective enough with the ball in his hands, but he was, again, fantastic in the pass protection.

Nine players caught passes from Cook, led by Tony Lippett's 94 yards and game-winning touchdown on five catches. Bennie Fowler had two grabs for 97 yards, one a deep ball and the other a slant that was taken for 60 yards. The deep ball might have been the play of the game, in terms of changing momentum after the pick-six. Macgarrett Kings hat four grabs for 52 yards. Fullback Trevor Pendleton made up for a personal foul with two catches, including a touchdown.

It was the best offensive line in the Dantonio era, and they stepped up against powerful Stanford. The Cardinal had a stout run defense and was near the top nationally in sacks. The numbers look worse than the eye test, if you watched the game.

Also, props to Dave Warner and Jim Bollman, who designed and called a great gameplan. Passing to set up the run, and they stayed aggressive until the final drive, but that's OK. 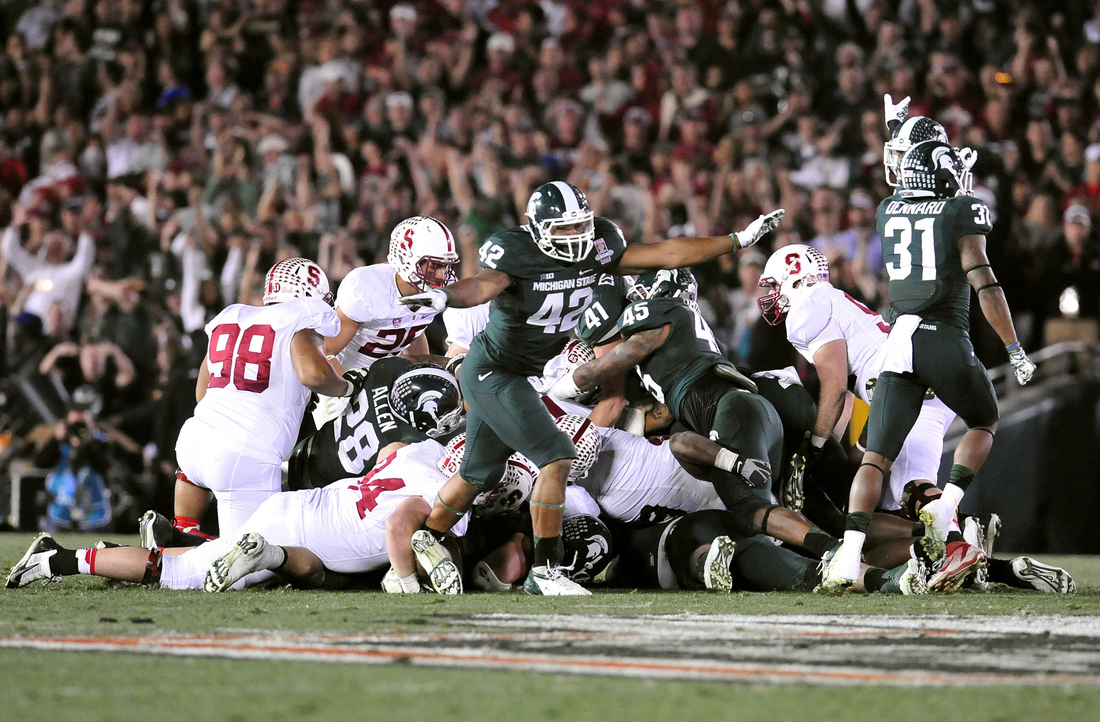 Just in case there was still anyone out there questioning this unit, they aren't anymore.

The world seemed surprised when Stanford took the opening drive down for a touchdown. I wasn't. You weren't. This defense is always most susceptible on the opening drive, before Pat Narduzzi makes adjustments. Stanford's touchdown came from a perfectly-throw deep ball, Kurtis Drummond missing a tackle for loss on a swing pass and Isaiah Lewis missing a tackle on the touchdown run. No secrets. From then on, there was a long run on the second drive, which led to a field goal, another deep pass and another field goal drive. That's it.

Stanford had 146 yards in the first quarter. The Cardinal had 159 for the rest of the game.

Quarterback Kevin Hogan was 10-for-18 for 143 yards and an interception. Stanford averaged 4.5 yards per carry, below their season average.

MSU couldn't get the pressure on the quarterback like they had since the Notre Dame game, but the pass coverage was great, and they stopped the run well.

In the last two games, Ohio State and Stanford went 5-for-27 on 3rd and 4th down against MSU, including 1-for-10 in the fourth quarter. Money down.

Mike Sadler had six punts, averaging 45.5 yards, but half were downed inside the 20, compared to one touchback. Michael Geiger made his only field goal attempt, a 31-yarder, and the true freshman finished 15-for-16 on the season.

Kings had three punt returns, including a 19-yarder to set up MSU's final touchdown. 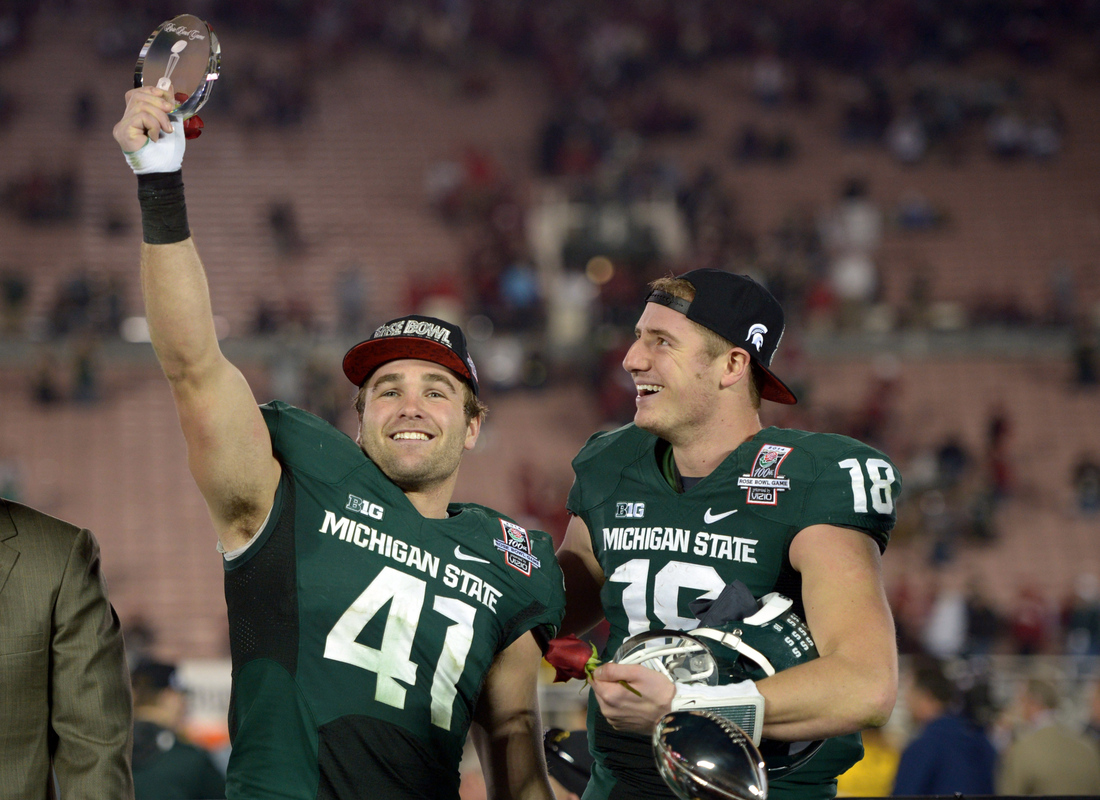 Congrats to everyone who got out there. It seemed like KJ and I were the only ones who didn't. Estimates had the Rose Bowl around 65 percent full of MSU fans, and they certainly were much louder. You painted LA green and made a statement about the MSU fanbase.

Pretty amazing. Michigan State fans have at least 70 percent of the stadium. First time in 26 years and it shows.

Last time I saw it that tiled in one direction was the Nebraska-Miami Rose Bowl title game. (All Red.) I've been to all but two since.

Mark Dantonio is staying in East Lansing, and a big pay raise is coming.

There was no magic (other than Magic). No tricks. No overachieving. MSU was simply the better the team, and clearly one of the best in the country. There's no playoff this year, but, in the final Rose Bowl as we know it, the Spartans made memories that will last a lifetime.