The 2013 Only Readers Awards

Share All sharing options for: The 2013 Only Readers Awards

The higher-ups at SB Nation have sent us the 2013 numbers for reader interaction. 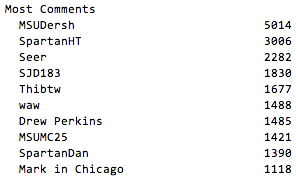 Congrats to Dersh for, once again, being the top commenter on the site. This doesn't include all the comments he posts on other SBN sites, positively representing TOC and the MSU fanbase (except when it comes to angry Stanford ladies) 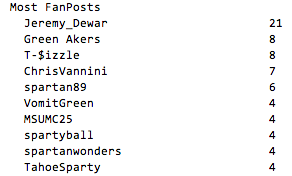 Most of these were hockey posts before we made Jeremy a full staff member. Don't forget, people, if you have an opinion or data that fills up a long comment, feel free to make it a fanpost, so the discussion can focus on that particular issue. It's a great tool. 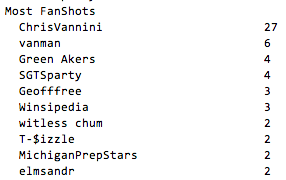 Thanks to everyone who participates on the site. You're the reason we do this, to have that rare intelligent discussion on the internet. And to the number of you who read the site but don't comment, please join in. The more, the merrier.