Recap: Gaun With The Win

Share All sharing options for: Recap: Gaun With The Win

It was ugly, but it was a win. Again.

Adreian Payne was out and Branden Dawson couldn't start, and MSU took down Northwestern 54-40 in Evanston in an affair that was never really quite that close.

In the first half, MSU was missing everything from behind the arc and making everything inside it, and they led 26-22 at half, despite shooting 44 percent, compared to 31 by Northwestern. In the second, the two-point shooting came back to Earth, the three-point shooting did not, but MSU got to the line more, clamped down on defense and pulled away for the win.

MSU is 16-1 on the season and 5-0 in the Big Ten, winning all four road games by double-digits on the year. It ties the best start in school history.

They keep limping along, but you'd rather limp and win than limp and lose. It sounds like MSU is going to hold out Payne until he can get as close to 100 percent as possible. We've said it after the last three games, but if this team can win these games (beating No. 3, covering spread in the past two) while handicapped with injuries, it bodes well for when — er, if — they get healthy. Unfortunately for MSU, that's a big if. 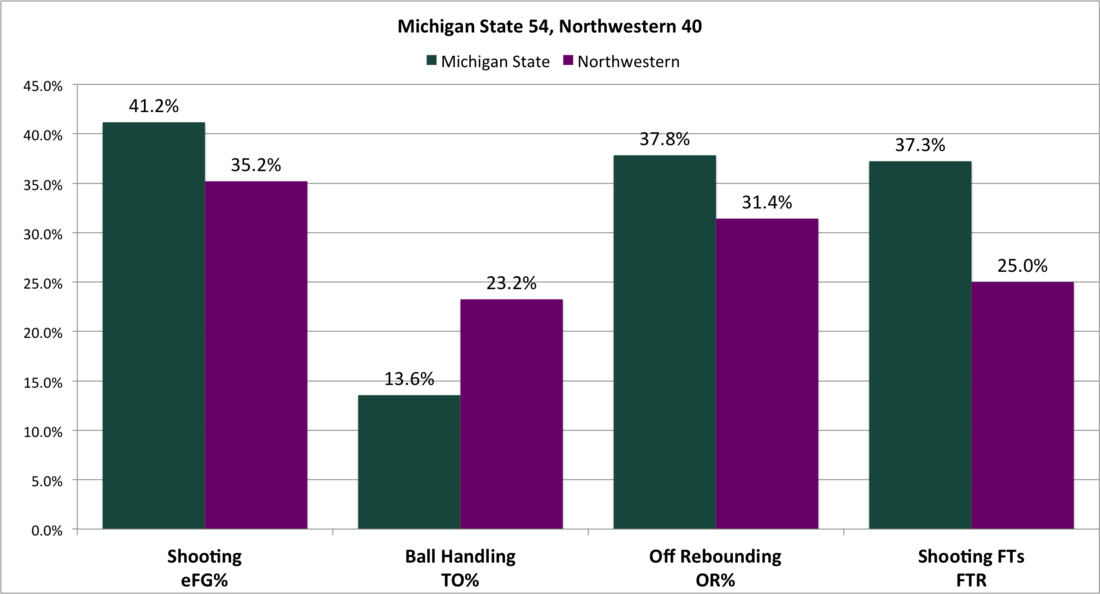 The shooting was bad, but it's weighed down by MSU going 2-for-16 from three-point range. The Spartans made 50 percent of their twos and finished at 1.05 points per possession. Given those three-point numbers, it's a bit more respectable. Izzo said after the game that Nortwestern is the best defense MSU has seen. I wouldn't go that far (Ohio State is No. 1 in adjD), but the Wildcats are the fourth-best defense MSU has faced, based on adjD (OSU, UNC, Texas). Northwestern was held to 0.77 points per possession, its worst output of the season.

Gary Harris - Took MSU's first four shots of the game and didn't stop, finishing with 14 points on 5-for-13 shooting (0-for-6 from 3). He also had six rebounds, two assists four steals a block and two turnovers. He was very active, but he's been more effective when taking it to the hoop, as his shot has been off a bit.

Keith Appling - Played better than his numbers: 11 points on 3-for-10 shooting, five rebounds, four assists, three steals, one block two turnovers. His defense was fantastic, and he was under control and drove to the hoop a lot, which MSU needed. Looked like he got hurt near the end of the first half while dribbling up court. Apparently, his shoulder nearly popped out, but he stayed in the game.

Keith Appling said his right shoulder -- same one that bothered him last year -- nearly popped out but did not. After that he was OK. #MASH

Alex Gauna - Maybe the best game of his career, giving me the rare opportunity to use him in the headline (and I know that's now how you pronounce it. Shut up). He tied a career-high with eight points on 3-for-4 shooting, with three rebounds (two offensive). Is it a sign of things to come? Probably not. But he played well.

Branden Dawson - Scored six points on 3-for-6 shooting and grabbed 10 rebounds (two offensive), with two assists and three blocks. Brought good energy on the defensive side of the ball.

Travis Trice - Scored seven points on 3-for-7 shooting. He has 17 two-pointers this year after having 12 last season.

Matt Costello - Got the start, but wasn't noticeable. With Payne out, MSU needs more from him inside.

Denzel Valentine - A bad stretch gets worse. Scored one point and didn't make a field goal in five attempts. Had six rebounds and two assists to one turnover. Izzo continues to get very mad at him, and you have to wonder where his confidence is, at this point. Seemed hesitant to shoot early on, and then airballed a three-pointer.

Kenny Kaminski - Didn't get into the game for a bit, and then immediately hit a three when he did. Despite MSU's offensive struggles, defense and rebounding remain an issue for him at times. MSU point guards turned it over two in the span of a few possessions trying to run a play through him, but it didn't appear he understood what was going on. Still not afraid to shoot though.

Gavin Schilling is now at 9.9 fouls per 40 minutes. He has more total fouls than either Branden Dawson or Gary Harris.

Next up: at Illinois on Saturday.