Share All sharing options for: Recap: Orange You Glad

The last time MSU won at Illinois was 2009. That Spartan team would win the Big Ten and reach the national championship game.

As MSU continues to win without Adreian Payne and heal up, the Spartans look more and more like a national contender — the latest win coming at Illinois by a 78-62 score.

MSU is 17-1 overall, its best start in school history, 6-0 in the Big Ten and 5-0 in all road games, with all five coming by double digits.

It was tight first half, with MSU not leading by more than six until about two minutes to play, when they pushed it to 35-25 at halftime. MSU's lead would float around 10 points for most of the second half. Every time the Spartans might pull away, Illinois would fight back in. Every time it look like Illinois would cut it close, MSU would push that lead back up.

It was a nine-point game with about two minutes left when Illinois coach John Groce got a technical foul, and that was that.

MSU will likely move to No. 3 in the country, which has been a bit of a curse. The last time the No. 3 team won was on Jan. 4, Ohio State against Nebraska. After that, Ohio State lost twice, Wisconsin took over and then lost twice. 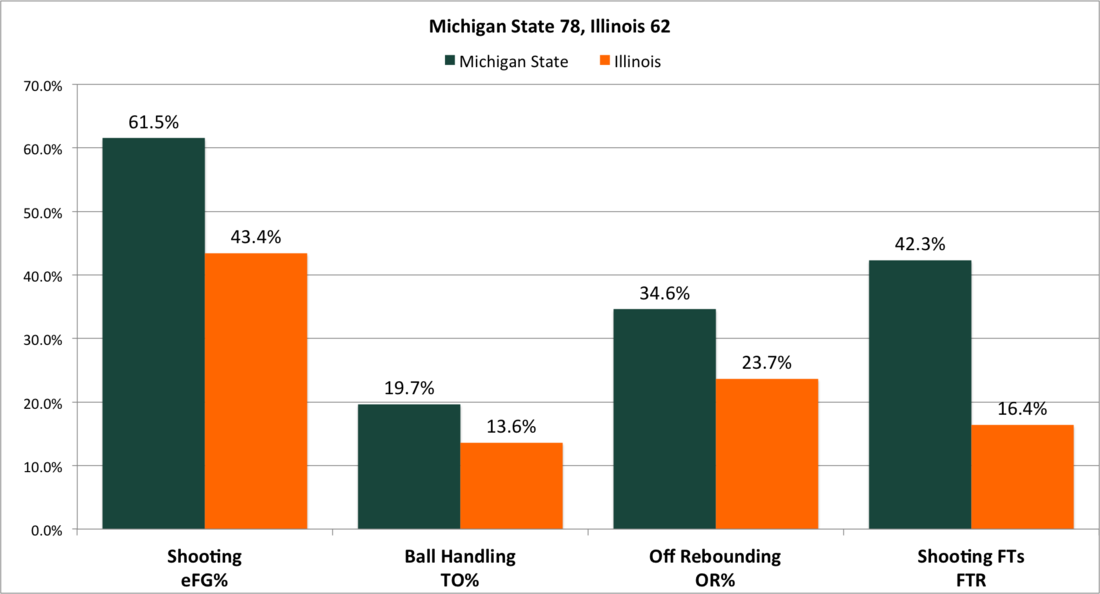 This was a very good offensive game for MSU, a lot better than the 42-41 loss in 2012, MSU's last trip to Champaign. A third of Illinois' shots this season have come from behind the arc. For much of this game, half of Illinois' shots were from there. They finished 7-for-23 on threes, while MSU went 6-for-15, making up for the poor performance against Northwestern.

Turnovers were the problem for MSU early, quickly leading to Illinois points and keeping them in the game, but that got under control.

The reason MSU was able to survive so many turnovers was because they rebounded nearly half their misses in the first half. It wasn't as good in the second half, but they took better care of the ball.

Gary Harris - Scored his second-most points on the season (23) on his second-fewest attempts of the year (7-for-9). This may have been his best game of the season, adding five rebounds and two steals.

Denzel Valentine - Had perhaps the best game of his career, coming off the dud against Northwestern. Valentine had 15 points and 11 rebounds with four assists and one turnover. Airballed a three-pointer early, but settled in after that, and he was called upon to do a lot on the offensive end, based on how Illinois was playing defense.

Keith Appling - Illinois was hedging with the big men all night to try to prevent Appling from driving to the hoop, which he couldn't do in the first half. Finished with 15 points on 5-for-12 shooting, four assists, three turnovers and one steal.

Matt Costello - Is Costello becoming an offensive weapon? In the past two weeks, we've seen him used more in the pick-and-roll and get some buckets out of it. He had a few against Illinois and also threw down a big dunk while on the fast-break. He's looking more and more comfortable with the ball in his hands, since Payne has been out. Costello won't have many plays called for him, but he is becoming an option. He also had six blocks and five rebounds on the defensive end.

Branden Dawson - Scored nine points on 4-for-7 shooting. Missed a few close shots posting up. Also had six rebounds, including three on the offensive end.

Next up: A home game against Indiana on Tuesday. The Hoosiers followed up their upset of No. 3 Wisconsin with a home loss to Northwestern.