The need for speed

Share All sharing options for: The need for speed

It's an annual rite of fall: Tom Izzo talking about how his team is going to run more this year.  Most years, the level of transition scoring ends up staying within standard bounds, as Izzo's more conservative instincts on offense kick in and the team enters the slog of Big Ten play.

This year, though, the ingredients were there for things to play out a little differently: the graduation of the team's main low-post threat, a guard-oriented returning core, and a very athletic roster overall.  And the numbers say Izzo is actually following through on his word.  MSU ranks 39th in the nation in average offensive possession length, up from 157th last season.

The data at hoop-math, meanwhile, indicates that nearly 30% of MSU's field goal attempts have come in transition (i.e., within the first 10 seconds of the shot clock).  That's up from about 24% last season.  (Looking at just initial shot attempts--removing offensive rebounds--it's 35%, up from 29%.)

And the team is scoring more efficiently on those shot attempts, too.  Their effective FG% in transition has increased from 56.8% to 60.9%.  (Unfortunately, hoop-math doesn't report free throw rate or turnovers in transition vs. non-transition situations.  We'll lobby for an upgrade.  FWIW, I highly recommend ponying up the $15/year for their premium data, which much of this post is based on.)

This scatterplot from UMHoops is a week old, but it tells the story: 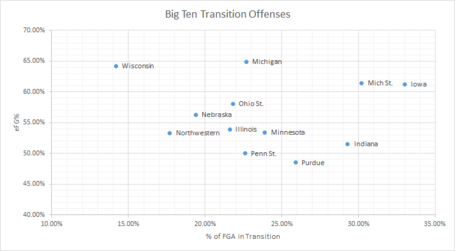 Now, some of this is a function of the fact that this year's data includes only 6 Big Ten games while last year's includes 18.  So those percentages may drop some.  On the other hand, this is not your father's Big Ten.  Three other teams in the conference rank in the top 40 nationally in average offensive possession length (Iowa, Purdue, Indiana) and only three others rank in the bottom 100 nationally (Michigan, Northwestern, Wisconsin).  There's more opportunity to get out and run now than there was a few years ago.

Anyway, here's a breakdown of where MSU's transition scoring is coming from compared to last year: 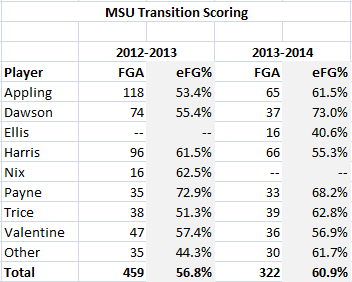 Just about everybody is scoring more efficiently in transition.  The only major exception is Gary Harris.  He's probably the guy pushing it the most compared to last year (double the 2013-14 FGA numbers to get a rough sense of how things compare year to year), so you can live with a slight downtick in efficiency given that it's still more efficient than the non-transition offense (51.6% eFG%).  And it's mainly a function of shooting a really low percentage on transition 3-point attempts: 23%.  Reversion to the mean, please.  Harris is shooting a lofty 80% on transition FGA at the rim.

Denzel Valentine, meanwhile, is a key cog as a distributor in transition.  He leads the team in transition assists with 33 (vs. 29 for Appling).

Finally, the rest of the roster is more involved in the transition offense, signalling it's a systemwide upgrade, not just one or two guys pushing things off the dribble.  The "other" category is basically the non-Payne bigs, so they're presumably getting more dunks and layups in transition off passes on the break.

There will certainly be a few more grind-it-out affairs like the Northwestern game during the remainder of conference play.  But this is a roster that's finally fulfilling Tom Izzo's promise to push the pace.  And, as we saw in 2009, that can come in awfully handy in March.