The four factors are incomplete.

They don't include #TWTW.

(The Will to Win, for those of you not familiar with Hawk Harrelson).

MSU played quite poor Tuesday night, but a stretch in the second quarter was enough to take the lead and hold on for a 71-66 win over Indiana. The Spartans are 18-1, 7-0 in the Big Ten and 4-0 without Adreian Payne.

MSU hasn't looked great in these wins without Payne, but they're still wins, and it says something that MSU hasn't (yet) suffered a letdown loss without Payne. North Carolina is 1-4 in the ACC, but, like, man, I don't know what to say about that loss, especially since everyone got hurt in that game. Wisconsin lost to Indiana. Indiana lost to Northwestern. Ohio State lost to Nebraska. It happens.

Is MSU #clutch? #Elite? Lucky? Quite simply, they've made the plays to win games. They may be without Payne and dealing with other injuries, but this is still a team loaded with talent and experience. It's paying off. Some have accused Izzo of whining about injuries. I think it's more that he knows this team can win a national championship, and it may be his best chance for a while. It's national title or bust. The bar is high.

On Monday, I wrote about Matt Costello, Alex Gauna and Gavin Schilling stepping up to replace Adreian Payne. At halftime, they had combined for zero points, zero rebounds and five fouls.

MSU trailed 46-41 with 11:54 to go, and it was looking like the Hoosiers could start to pull away. Then Gary Harris made two free-throws and a three-pointer, and the game was tied. It was part of a 17-4 run that put MSU in front for good. Harris scored 20 points in the second half. MSU made the plays at the most important moments. 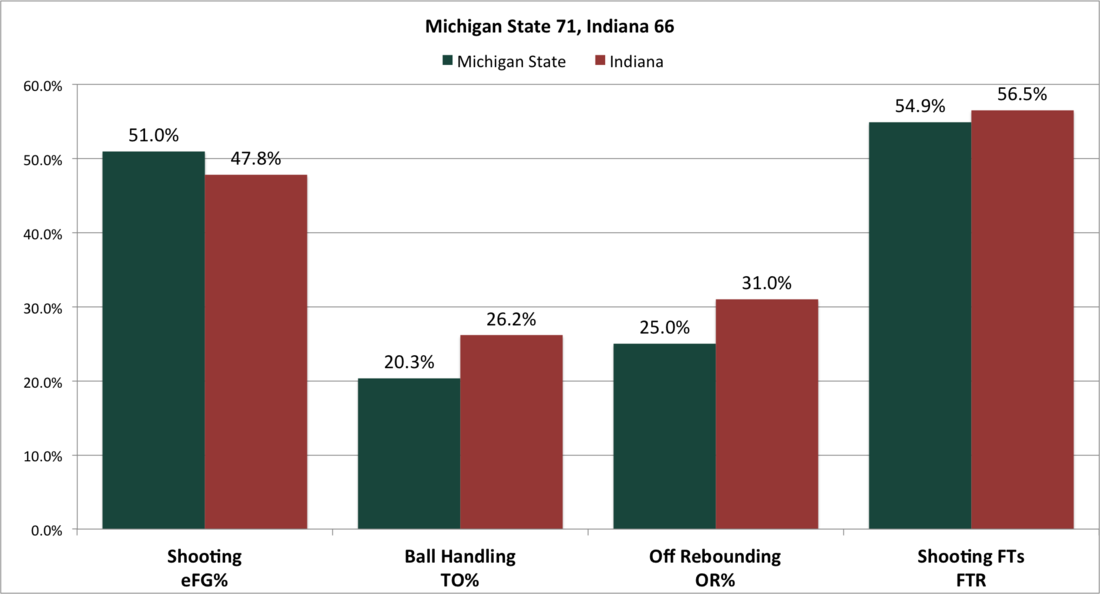 MSU's #WTW isn't shown, because it was off the charts.

The Spartans  shot 51 percent on 2s and 6-for-18 on 3s. Indiana doesn't take many 3s (4-for-10) and was able to constantly drive into the paint. In the second half, Indiana started missing close looks, and it was turning into MSU fast-break points. MSU had a 22-8 edge in fast-break points. It helped that Indiana inexplicably stopped going to Noah Vonleh, who was 4-for-5 in the first half but had just one more shot attempt until late in the second half. He finished 6-for-8.

Props to ESPN and Dan Dakich for making Indiana's turnover rate the most important number before the game. But MSU's turnover number was high, too, and MSU had a 15-14 edge in points off turnovers.

Indiana is one of the top rebounding teams in the country. MSU had the edge in the first meeting, but the Hoosiers were better this time around. Branden Dawson had five offensive rebounds. The rest of the Spartans had three.

The free-throw rates are high as the whistles were frequent. Five MSU players had two fouls in the first half. Eight Indiana players had at least one. It's worth noting only Travis Trice reached four fouls for MSU. Freedom of movement, y'all.

Branden Dawson - Perhaps the player of the game for MSU, finishing with 13 points on 5-for-7 shooting and nine rebounds (five offensive). Brought the energy that had been missing for a few games.

Tom Izzo says Branden Dawson may have won the game with a 2-minute stretch. And for maybe the first time this year -- unhappy with Appling.

Gary Harris - Indiana fans have to really hate him. Not only for picking MSU over them, but the numbers he has put up against them, too. Harris scored 24 points on 8-for-13 shooting, including 4-for-6 from 3. In two games against Indiana this season, Harris has averaged 25 points. Recent games filled with Harris drives are a good sign of him getting healthy, and his shooting performance on Tuesday could mean his shot is also coming back.

Keith Appling - Appling did not play well, but he was dealing with a lot. An early spill led to a back issue he was stretching out all game. Then another fall appeared to reinjure his right wrist. In the end, Appling had eight points on 2-for-10 shooting. Injuries or not, Appling's shot selection was poor. Maybe he couldn't move as quick as he'd like, but he couldn't get to the hoop. He was also an uncharacteristic 4-for-9 from the free-throw line, but did have six assists to three turnovers.

Travis Trice - While Appling was having a rough night, Trice made some big plays. He scored 10 points on 3-for-6 shooting, including two long balls, three assists and two turnovers.

Denzel Valentine - Pete made a comment a few days ago that Valetine may go down as the best rebounding guard in MSU history. He might be up there, grabbing seven more rebounds on Tuesday while scoring 10 points. It was Valentine's fourth straight game with at least seven rebounds. He has at least six rebounds in 10 of the last 11 games. That has been a big key in making up for the absence of Payne.

Matt Costello - Four points and one rebound in 22 minutes. Played OK defense against Vonleh, but was nowhere to be seen on the offensive end again. Combined with Gauna and Schilling, the three scored four points and had two rebounds and seven fouls in 33 total minutes. Not good.

Next up: Michigan on Saturday. College Gameday will be in town, and the Wolverines need to beat Iowa on Wednesday to also come into the game undefeated in Big Ten play. Izzo isn't sure if Payne will play, and I don't think he's just being coy. If Payne does play, I wouldn't be surprised if he sticks at the 5 and MSU plays small, especially after the performance of the other bigs in this one.