(First, I'd like to apologize for the influx of some trolls in the game thread. It's not something, I don't believe, that we've had much of an issue with in the past. I've banned the trolls and re-instituted the waiting period for new members. If it's an issue again, we'll add moderation. Again, apologies.)

They made the plays.

Without Adreian Payne, MSU had made the big plays at the right times to go 4-0 without him. They weren't playing great, but they had #TWTW.

MSU led Michigan 60-58 with just more than four minutes to go. About two minutes later, the Wolverines led 68-60. They made a three-pointer, a two-pointer and went 5-for-5 at the free-throw line in this stretch, and that was all but the game. MSU fouled to lengthen the game, and they did get close, but ultimately fell 80-75.

In the end, the result was what I expected without Payne and Dawson, save for all the late free throws and such pushing the final score up.

MSU led 36-30 at halftime and was rebounding 41 percent of misses at one point in the second half, despite missing its top two rebounders. But Michigan's three-point shooting had kept them within striking distance, and once MSU's energy wore off, the rebounding evened up and the Wolverines made the shots to win it.

That's a good Michigan team. Three straight wins over top-10 teams is not a fluke. They're in the driver's seat for the conference title, just in case you thought Trey Burke's departure was the end of that run. Just like Kirk Cousins' graduation wasn't the end of the MSU football program.

There's no excuse for injuries. MSU got a number of overachieving performances and was in a position to win down the stretch. They didn't. Tom Izzo said he was "crushed." If MSU can get that same effort when Payne and Dawson come back, the sky is no doubt the limit. It's a big if, though, and it's a big if as to whether or not the team can truly get healthy in time for the NCAA Tournament.

Couple things of note from the locker room: Keith Appling said his wrist is so bad "I can't even shoot." Has been missing shootarounds.

Tom Izzo was tearful in the locker room, MSU players said they haven't seen him quite like that. Mostly he talked about Appling's toughness.

A couch is currently burning in Ann Arbor (Photo by @everettcook) pic.twitter.com/gX9hvEQyNR 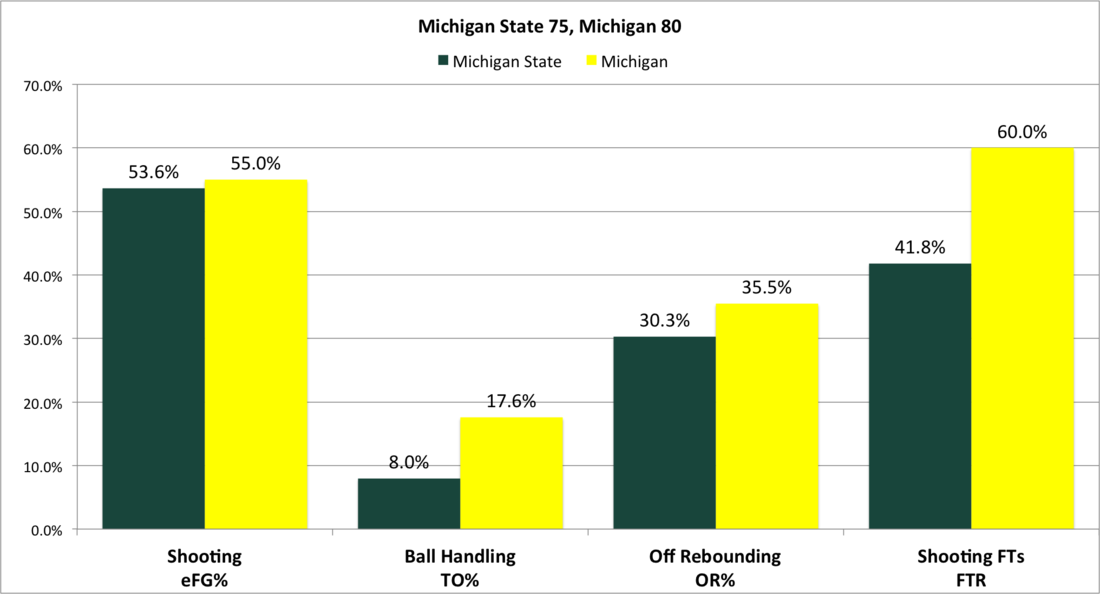 The three-point shooting carried the Wolverines, going 11-for-19 from behind the arc, compared to just 35 percent inside it. Stauskas himself was 5-for-6. He can blow a kiss to the crowd after a performance like that. Even though Gary Harris was hounding him, he hit some shots that do make him a legit NBA prospect for the upcoming draft.

MSU held on to the ball well, which ended up being important as the rebounding battle started to go the other way. Michigan was No. 16 in defensive rebounding coming into this one. Again, MSU was at 41 percent at one point in the second half, but couldn't get the rebounds down the stretch. Michigan isn't a great offensive rebounding team, but they did well and took advantage, with a 15-4 edge in second chance points.

MSU had a big edge in fouls in the first half, as the defense prevented Michigan from even getting the ball inside. But as the energy wore off, the Wolverines drew more fouls, and then the last few minutes obviously blew that number up. Coupled with 11-for-19 on three-pointers, U-M was 25-for-30 at the free-throw line (69 percent-shooter Derrick Walton Jr. went 9-for-10, with most in the final minutes). That's the winning formula on the road.

Gary Harris - This summed it up best.

Izzo: "If Gary Harris isn't the best player in the league on both ends of the floor then God bless whoever is."

Harris put in 27 points on 9-for-15 shooting, and he should have gotten the ball more down the stretch. He played fantastic defense shadowing Stauskas and forcing the other Wolverines to lead the charge back. If there's one negative, it's that Harris went 5-for-9 at the free-throw line, and even his makes were hitting the front of the rim and bouncing around. Still, he tried to carry MSU to a win and almost did it.

Alvin Ellis - On the topic of overachieving Spartans on the night, Ellis put in 12 points on a perfect 4-for-4 shooting. He stepped up when he needed to, and more playing time could be coming if Appling's ailments get worse.

Matt Costello - Put up nine points and nine rebounds (three offensive) in the absence of Payne. He has been playing well in this stretch, and MSU hopes that will continue when Payne comes back. The combination of Costello, Alex Gauna and Gavin Schilling scored 17 points and grabbed 14 rebounds in 39 minutes. They were a big part of that energetic first-half plus to build the lead, but they were out of gas down the stretch.

Russell Byrd - How about Byrd playing 13 minutes and shutting down an NBA player in Glenn Robinson III? Byrd couldn't do much offensively, but MSU got some big minutes out of Byrd, and you could see his confidence when he trash-talked Robinson after a block, starting a scrum. Much of Byrd's problems have been mental. For the 1,000th time, could this be the spark?

Denzel Valentine - Did a good job penetrating and dishes through the early part of the game, but he couldn't buy a shot, going 1-for-5. Only four rebounds, too, after recording at least six in 10 of the previous 11 games.

Kenny Kaminski - Like Byrd, he played really good defense on Robinson, but he didn't hedge well on the high ball screens, leading to a number of three-pointers in his face. Scored one bucket on four shots in 14 minutes. You'd like to see more from him offensively in this game.

Next up: At Iowa on Tuesday. Michigan could be two games up on second place before playing again, if MSU falls in Iowa City. Before MSU worries about the game in Ann Arbor, it has most of the Big Ten season still to play.

For Payne to not play in this game really means he's not in great shape. After Iowa, MSU has more than a week until its next Big Ten game, with the Georgetown game at MSG in between. If Appling has been missing shootarounds, you wonder if it's worth sitting Appling for the Georgetown game.

The experience gained by the bench with all these injuries is valuable, but the plan is for that experience to be useful in the short spurts that they're needed, not entire games. We don't know if they will get back to that point.

I'm not in the boat that says Big Ten play means nothing, only March. A good record in Big Ten play gives you a better seed and a (presumably) easier path in March. But there is a balance between healing up and not giving yourself the best chance to win games.

Still, you know Feb. 23 will be circled on the calendar. 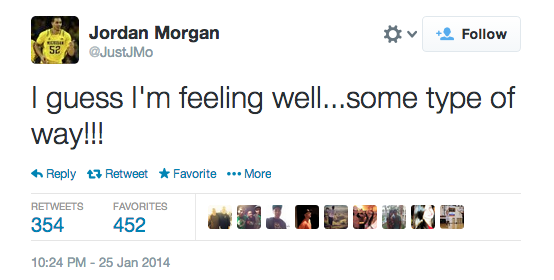