On one hand, getting such great performances from the bench is a good sign for the Spartans, but only time will tell if that was a spark of energy for one rivalry game. If it continues, the Spartans could be in good shape. If it doesn't, they're in trouble.

We've got ourselves a Big Ten race.

Russell Byrd hit a three-pointer in the final seconds, Travis Trice scored 10 points. Matt Costello scored 11 points and had 12 rebounds, and the defense all around was elite-level as MSU came out with an improbable 71-69 overtime win in Iowa City on Tuesday night.

A loss would have put Michigan up two games on the rest of the league. Instead, MSU is up two games in the loss column on third place and a game back of the Wolverines going into a long break in conference play. They're in good shape.

MSU had 23 fewer free-throw attempts than Iowa. The Spartan offense was ugly for much of the night. But they came out with the win thanks to one of the most impressive stretches of defense you'll ever see. Iowa hit a three-pointer with 9:56 left in the second half. They wouldn't hit another field goal until a layup with six seconds left in overtime. That's 14:50 without a field goal by the No. 5 offensive team in the country (per KenPom).

The crazy amount of fouls (29 for MSU, 20 for Iowa) led to an ugly game that never got to the pace Iowa would have liked. (MSU was better offensively when pushing, but it looked like it hurt their defense). Iowa's last field goal before the drought put them up by four, and the Hawkeyes actually pushed it to 57-51 with less than six minutes to go. But MSU got a three-pointer from Keith Appling, a layup by Costello and a dunk by Costello to take the lead. Free throws were Iowa's only form of offense, but it was enough to stick around and have a shot to win at the end of the second half.

Byrd hit a three-pointer in the corner with 33 seconds left to give MSU a 70-64 lead to seemingly clinch the game. But Trice missed a free throw, Gary Harris fouled to create a three-point play and then Keith Appling missed two free-throws, giving Iowa another chance to win the game, or tie. A driving layup missed, and MSU escaped Iowa City with a stunning win.

KenPom gave MSU a 28 percent chance against the No. 4 team in the country. Not many MSU fans thought a victory was possible. I told Black Heart Gold Podcast that Iowa would win by 10-15 points. There were no advantageous matchups. You look at the free-throw disparity and wonder how the hell MSU stole this one. It was an amazing stretch of defense and a second straight game of great play from unexpected players

There have been very few times I gave MSU little chance to win a game. We try to avoid hyperbole and cliches on this site. This is one of the most stunning wins I can remember.

I'm not even going to joke about never doubting. I doubted everything. Way to go, guys. 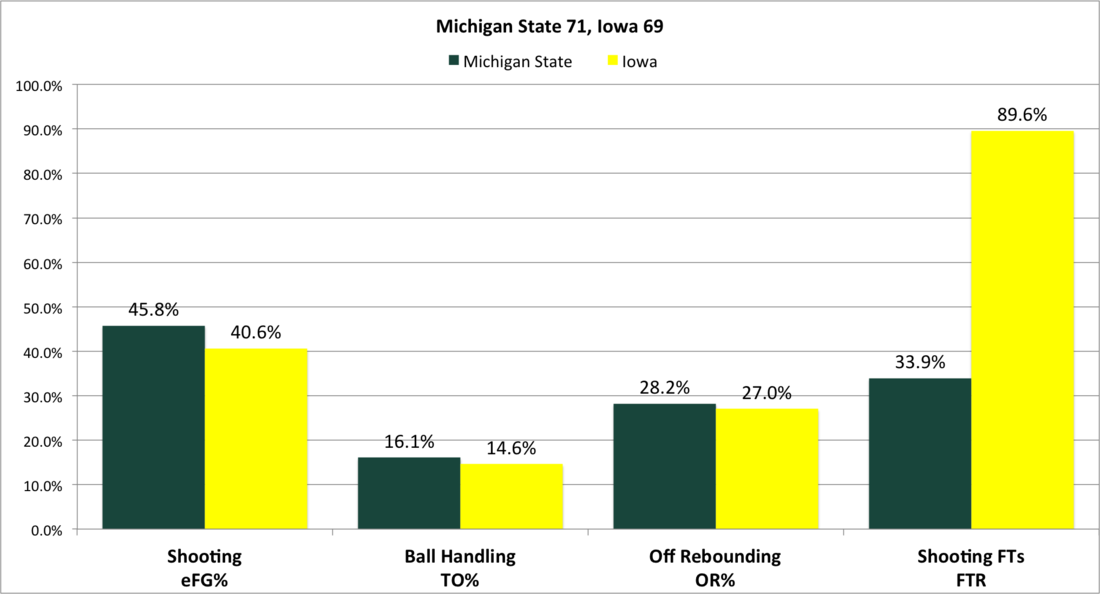 Pretty even across the board before the free-throws. MSU went 10-for-29 on 3s, while Iowa went 3-for-12. We said before the game that Iowa opponents were taking 38 percent of their shots from deep and hitting just 28 percent. Three-pointers were 49 percent of MSU's shots, and they hit 34 percent of them. Given the lack of Adreian Payne and Branden Dawson, it wasn't a surprise they took so many.

Neither team did particularly great on the offensive glass, which was probably a win for MSU. Iowa had an OR% of 38.6 percent coming into this one. Costello had six offensive rebounds for MSU, the rest of the team had five.

As for those free throws, the officiating was terrible on both sides, but Iowa was clearly the more aggressive team, constantly cutting and drawing fouls in the paint, just like MSU did (and Michigan didn't) on Saturday. Izzo shrugged his shoulders at halftime, but MSU didn't deserve many calls. But you wouldn't believe those numbers based on the reaction of the Iowa crowd.

Keith Appling - Just when you thought the narrative about his injury/shooting was gone, he missed two free throws at the end. Appling led MSU with 16 points on 6-for-14 shooting. He went 3-for-6 from deep after going 2-for-14 in the past five games. Four assists and three steals to just one turnover. You'd like to see him running the point in the key situations more often, instead of Trice, but Appling is obviously hurting. The time off will be huge for him.

Matt Costello - Probably MSU's player of the game, scoring 11 points with 12 rebounds (six offensive) in 28 minutes. Also had two steals, two blocks and an assist. When Payne first went out, I wrote about Costello stepping up in his place. After a poor game against Indiana, he responded with 9 and 9 against Michigan. Oh, and he was 5-for-6 at the line on Tuesday. We may be seeing the emergence of Costello as a reliable player in the full rotation.

Denzel Valentine - Had some great moments and some tough ones, but finished with 12 points on 5-for-13 shooting, 2-for-7 from deep. Also had six rebounds (two offensive), two assists, one block and a turnover. He has seemed a bit uncomfortable and out of place when MSU plays him at power forward.

Gary Harris - Who imagined MSU winning this game with nine points from Harris? Roy Devyn Marble played great defense on Harris, who went 3-for-9 from the field. But he did add in four assists and a block. Down the stretch, MSU again didn't get the ball in his hands, resulting in some ugly, ugly possessions.

Travis Trice - Scored 10 points, going 3-for-5 from deep. Against a long Iowa team, this wasn't a great matchup for Trice, and he had two turnovers to zero assists, and that doesn't include some shot-clock violation possessions in overtime where he had the ball the majority of the time. Again, I know Appling was ailing, but they should have had Appling or Harris bring the ball up the court in those situations.

Russell Byrd - Shades of Tim Bograkos at Kentucky. For the second straight game, Byrd got big minutes and was asked to play in key situations. Against Michigan, he played good defense, but didn't provide much offensively. It was the same case on Tuesday, until his three-pointer in overtime and the ensuing humungous smiles from Byrd and Izzo.

Oh, and in your face, guy in the comments who said Russell Byrd doesn't deserve a scholarship.

Kenny Kaminski - It looks like Byrd is taking his minutes, which would have been insane to say a week ago. It's looking like the spark has gone out for Kaminski's shooting. He scored five points on 2-for-8 shooting, including 1-for-6 from deep. Still, without Payne and Dawson, his play on both ends is important.

Next up: Georgetown at Madison Square Garden on Saturday as part of a Super Bowl tripleheader. Izzo has already said Payne would miss that game. The Hoyas are banged up, too, and it's hard to see Izzo sitting Appling for that one, but it might be advised.

It looks like the Michigan game wasn't just a burst of energy from the bench. This team truly has the depth we questioned when Payne and Dawson went down. Halfway through the Big Ten schedule, MSU is 8-1. They didn't have Payne for six of those and didn't have Dawson for two. The second half is more difficult, but it's looking like Payne might be back for the next Big Ten against Penn State. No matter when they come back, this team is playing with the confidence and, well, grit, top to bottom, that it can win a championship with any group of available players.