Share All sharing options for: Recap: Some Assembly Required

Maybe Gary Harris should have gone to Indiana, based on how he plays at Assembly Hall.

Harris led MSU with a career-high 26 points as the Spartans cruised to a 73-56 win at Indiana.

MSU dealt with first-half foul trouble, with Keith Appling, Travis Trice and Adreian Payne all picking up two fouls in the half. But Harris scored 17 and Branden Dawson was 5-for-5 in the half to give MSU a 33-24 halftime lead. With the troubled trio back in the second, MSU pulled away, answering every time Indiana started to put a run together.

Indiana cut MSU's lead to 25-24 with three minutes left in the first, but Dawson answered with a layup, and Harris hit two threes to push the lead into the break. A 7-0 run early in the second pulled Indiana within 40-32, but MSU answered with a Trice layup, Dawson steal and Appling three. The Hoosiers got within nine with 6:21 to play, but MSU answered again with a 9-1 run to put the game away. 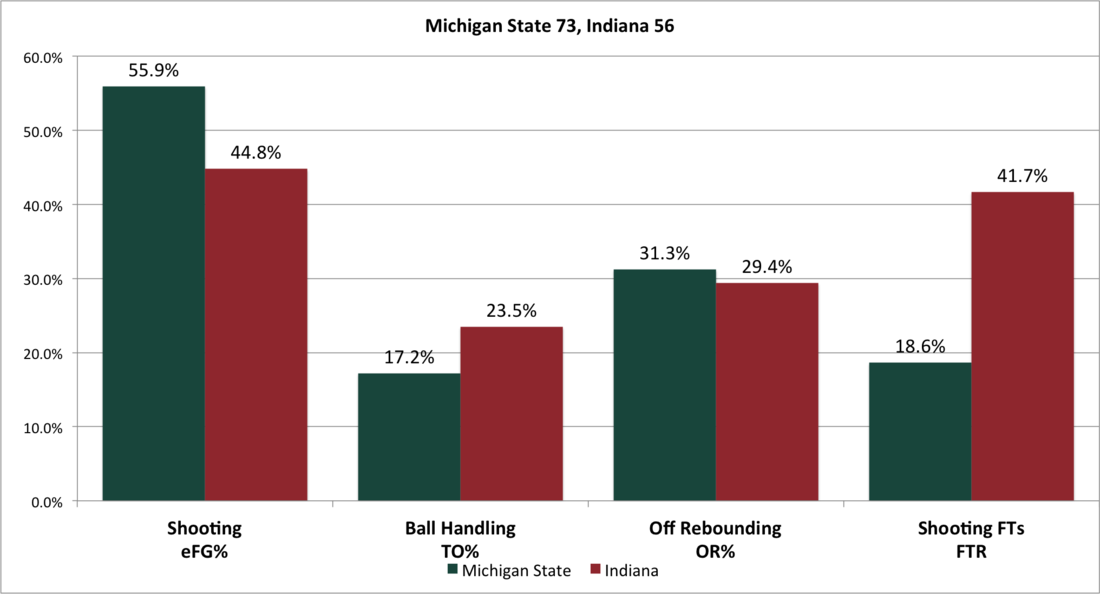 Indiana was one of the most turnover-prone teams entering the game (22.1 percent), and that will go up after this one. Of Indiana's 15 turnovers, 12 were MSU steals.

Perhaps most impressive in this game was MSU's rebounding. The Hoosiers came into this one grabbing 42.7 percent of misses, No. 4 in the country, while opponent got just 27.2 percent. MSU did very well on the glass.

Call "Hall of Calls" if you want, but Indiana was No. 10 in the country at getting to the line. This was actually quite below their season FT rate of 54.7.

Gary Harris - There were no IU students to taunt him, but Harris once again put on a show, scoring 26 points on 8-for-18 shooting, including 5-for-10 from 3. He also had five steals, four rebounds and two assists.

Branden Dawson - Made his first six shots and finished with 13 points, six rebounds (two offensive), three steals, two blocks and one assist. Other than the UNC game, Dawson has been a consistent force and has brought the energy in each game.

Keith Appling - Barely played the first half while dealing with foul trouble, as he did a year ago. But this time, he stayed in the game in the second, scoring all 14 of his points in the second half. He shot 6-for-10 and 2-for-4 from 3 in 26 minutes. He had just one rebound and one assist. His defense was also important. Indiana's Yogi Ferrell scored 10 points in the first half, but made just one field goal in the second.

Adreian Payne - Was quiet on the scoreboard, scoring just four points on 2-for-6 shooting and had five rebounds (one offensive) in 25 minutes. Dealt with foul problems for most of the game, but MSU was still able to rebound well without him, which was huge.

Denzel Valentine - Got the start again and scored five points on 2-for-6 shooting, one being a 40-foot 3-pointer at the shot-clock buzzer. Valentine once again led MSU in rebounding with six (one offensive). He also had four assists, one steal, one block and one turnover, doing a good job of controlling the ship with Trice when Appling was out in the first half.

Travis Trice - Played just 18 minutes, due to foul trouble, and finished with six points on 2-for-6 shooting with four assists, one steal and two turnovers.

Matt Costello - Played 15 minutes in his second game back from mono, scoring two points and grabbing three rebounds. He also took an almost-three-pointer, after which Tom Izzo was very upset. He said he's still feeling some effects, such as dizziness and lack of focus, and Izzo admitted he played more than Izzo wanted him to.

Kenny Kaminski - As Tim pointed out, it looks like Kaminski has replaced Gavin Schilling/Alex Gauna in the rotation because of his ability to stretch the defense and score. He hit a three-pointer and grabbed two rebounds in 11 minutes.

Next up: A top-five showdown against No. 3 Ohio State at Breslin Center on Tuesday. Buckle up.

MSU heads into the matchup perhaps as healthy as its been since the opener. The Spartans are starting to get on a roll, both in terms of individual play and figuring out the rotation, and a win on Tuesday could put MSU in the driver's seat early in the Big Ten season. Ohio State hasn't played a difficult schedule, and Tuesday will be a test to see just how good they are.