The Izzone had the chant all ready to go, and they almost didn't get to use it.

Centimeters away from a historic collapse.

Last year's game against No. 1 Indiana at Breslin was the first top-five home game in MSU history. The Spartans blew a late lead and lost. Tuesday against Ohio State was the second game, and MSU blew a 17-point lead, but somehow got into overtime, where they pulled out a 72-68 win over the No. 3 Buckeyes.

A layup by Keith Appling with eight minutes left put MSU up 55-38. But from that point on, MSU went into the prevent. On offense, they kept running the clock down to the final seconds and scrambled. Ohio State's No. 1 KenPom defense took advantage, forcing turnovers and getting quick buckets. It didn't matter that MSU was wasting 30 seconds when Ohio State was scoring in five. At one point, Ohio State had 17 turnovers to MSU's six. Before you knew it, that difference was 19-16.

In the last 9 minutes of game action, Michigan State has 10 turnovers and 1 made field goal. 0.20 PPP.

The Buckeyes would go on a 20-3 run to tie the game. An OSU steal and layup attempt in the final seconds was deflected by Appling and knocked off the rim by a hobbled Adriean Payne, barely enough that it wasn't goaltending. Appling had been dealing with cramps, Travis Trice was out with an illness and Denzel Valentine was dealing with foul trouble (partly because of the run), but you can't just sit back like that, especially when it clearly isn't working.

Once MSU got into overtime, they started playing regular offense again. They attempted to score in transition for the first time in a long time, and it paid off. Then the Buckeyes came back again. A pull-up three-pointer from Appling wth 29 seconds gave MSU a three-point lead. Ohio State made two free throws, Appling made two free throws and a desperation three from Ohio State was off. MSU held on for a huge win, and still exhaled.

One month to the day since the MSU football team ended Ohio State's undefeated season, the basketball team did the same thing.

The game also featured another Daniel Bryan Yes! chant from Travis Jackson, this during halftime as the football team was honored. It was a great scene and was featured on Sportscenter. 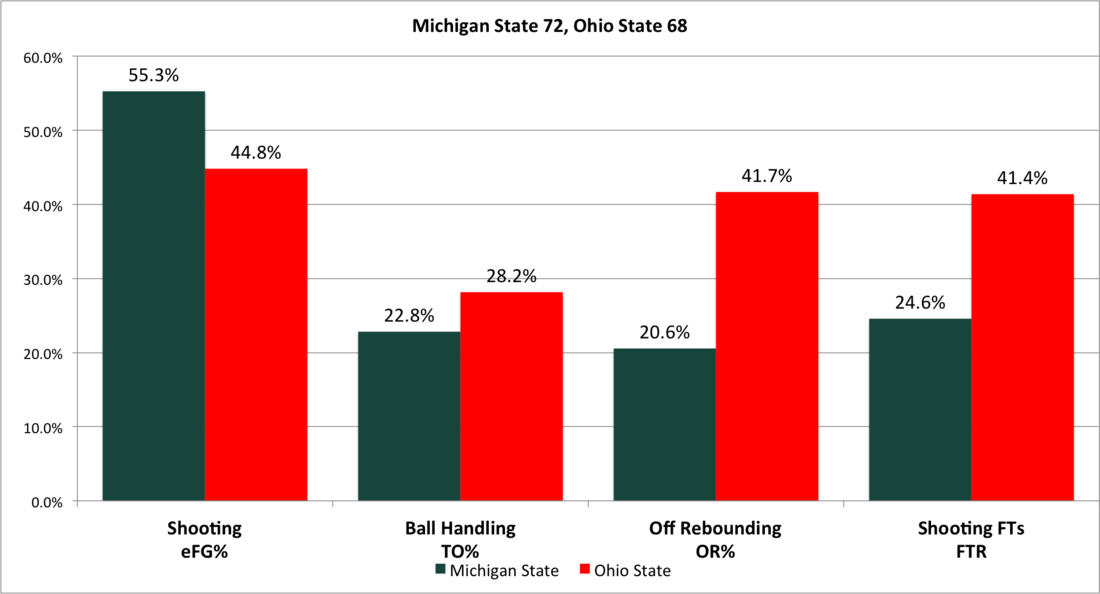 Through 32 minutes, it might have been MSU's best performance of the season. Inexplicably, they just stopped. The difference in the game was turnovers. Once they evened up, the game evened up.

Do they talk too much about Aaron Craft? Sure. Especially when he had zero points and one shot attempt for most of the game. But those plays he made at the end are why he gets the media love. Want it to stop? Don't let him drive to the hoop when you're up two. Don't let him get on a loose ball. Don't let him do the off-the-butt inbounds pass MSU gives up a few times a year. MSU's inbounding always struggles against Ohio State, because they don't let MSU do the home-run ball. The Spartans used two timeouts because they couldn't inbound the ball.

The rebounding was pretty surprising, even if Payne was dealing with a sprained foot. Ohio State was an average rebounding team. Payne had six total rebounds and Branden Dawson had four (all early in the game). MSU had seemed to fix its rebounding problem in recent games, but down the stretch, the Buckeyes got a lot of second chances in that comeback.

Adreian Payne - Left warmups limping and was called "very questionable" by MSU. Didn't start, but did come in and play through everything, finishing with 18 points on 7-for-14 shooting with six rebounds (three offensive) in 32 minutes. Guess the foot was OK, as he was able to do this twice.

Izzo said Payne was in tears because he couldn't play and knew it, but wound up fighting through it.

Keith Appling - Scored a game-high 20 on 6-for-11 shooting, along with six rebounds, seven assists, five turnovers and a steal in 43 minutes, again, dealing with bad cramps. A gutty effort, and he got the best of Craft in this one.

Izzo on Appling: "If you want to write a story, write on his character and his heart because he sucked...it...up. And so did Adreian."

Gary Harris - Couldn't be found in the first half, blanketed by Shannon Scott. But once Scott picked up his second foul, Harris picked his game up. He finished with 13 points on 5-for-10 shooting, along with five rebounds, three assists, two turnovers and three steals. Izzo said after the game he's been playing Harris too many minutes. But given the situation today, there's not much Izzo could do.

Kenny Kaminski - If he can keep his head on straight, he'll keep moving up in the rotation. Scored nine points on 3-for-4 shooting from deep in 16 minutes, including one in overtime. He is full of confidence and never afraid to shoot. He's also decent on the defensive side of the ball. He may be the No. 2 big man soon, playing over Costello down the stretch.

Branden Dawson - Reportedly has been practicing well, but his second no-show of the season, scoring four points on four shots with four rebounds in 34 minutes, most of that coming early in the game.

Denzel Valentine - A night to forget. Scored six points on 2-for-9 shooting, five assists to three turnovers and fouled out.

A win's a win, especially when that comes over the No. 3 team in the country. Wisconsin doesn't go to EL or Columbus, making this game even more important. KJ summed it up well.

Serious analysis: first 30 minutes of game show how high ceiling is for this team. Lack of depth, Appling cramps (?) a factor in collapse.

The San Antonio Spurs blew a 16-point lead in the final five minutes on Tuesday night, and they also pulled out an OT win. So maybe it just happens.

Next up: Hosting 12-3 Minnesota on Saturday.