Breaking down the MSU win against Nebraska 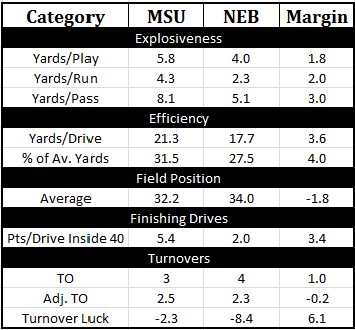 [As always, these are sack-adjusted and the final kneeldown to end the game was not included.]

First off, I will gladly dine on some crow because I was quite concerned about the run defense after giving up 6.5 yards per carry to Wyoming last week; there was clearly no issue stopping the run in this game. Part of that is that Nebraska was down by several scores early and had to pass the ball, but even so this was a masterful performance against a legitimate Heisman candidate in Ameer Abdullah. That is something even last year's defense didn't do. Color me impressed.

This was a sloppy game, and I'm not just talking about the tailgates beforehand. Of 74 total passes attempted, just 32 were completed. There were three fumbles, a muffed punt, almost 150 yards total in penalties, and of course, this:

This sloppiness trended towards helping MSU; the +6.1 points of value from turnovers may have been the difference in the game.

The offense was pretty explosive though not very efficient, as the turnovers contributed to the high number of total possessions (18!). That lack of efficiency was OK until late in the game when Nebraska started making some headway.

Unlike some I'm not very worried about the offensive performance, for a few reasons. First, the explosive plays were there early (I'm looking at you, Tony Lippett). Second, the flow of the game dictated running the ball, and MSU had nearly 19 minutes of possession in the second half. I understand the conservative strategy given the general sloppiness of the game and the size of the lead.

There were four strange things that happened to make this game closer than it should have been, and I think the football gods were angered by the student section. Here they are:

An interesting question: would it have made sense to go for it on 4th down instead of letting Geiger attempt the field goal? Geiger has been pretty solid, so I figure he has about a pretty high chance of making that kick. However, that still makes it a one-possession game. Going for it is probably about a 50-50 proposition at 4th and 3, but if the first down is achieved then the game is over. Ultimately, I think Dantonio made the right call here, as you kind of assume Geiger hits the field goal, and an 8-point lead with just a minute left would be pretty difficult to overcome.
The bottom line is that while it wasn't always pretty, the playoff dream survives.