One explanation for the Spartans' loss to Georgetown -- jet lag from East Lansing to New York is a thing.

Tuesday's win against Iowa in Iowa City went to overtime which, in hindsight, should've been seen as an indicator that the Spartans should not be favored by eight against a Georgetown squad playing fairly close to D.C.

The first half was ugly as both the Spartans and Hoya combined for 19 turnovers.  While Georgetown seemed limited only by their ability to hold onto the ball, MSU seemed to lack an energy as they settled for three point shots.  When those fall, great, but they didn't this afternoon -- Meanwhile, the Hoyas continued to get boards on the offensive end, offsetting their turnovers.  At the end of the half it seemed a wonder that Michigan State led.

In the second half Georgetown reduced their turnovers, and MSU was in trouble.  The erratic shooting continued from both outside and the free throw line, and no one would or could post up.  While the defense played well, the rebounding still failed the Spartans' which led to enough second chances for the Hoyas -- second chances which, combined with the Spartans' mediocre shooting and lethargic rebounding, could not overcome, as they suffered their third loss of the season.  Hand it to Georgetown -- they've been short-handed just like Michigan State has, but they played with much more energy and purpose, and throughly deserved the win. 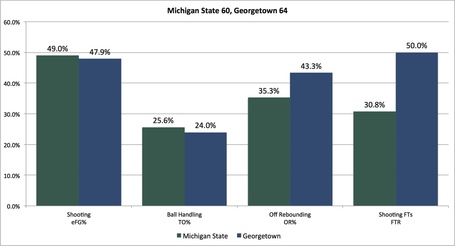 The two big things (which were hard to not see) -- the Hoyas' dominance on the offensive boards, and Georgetown's ability to get to the free throw line.  I don't think this game was officiated too unfairly -- Georgetown would drive, Michigan State shied away from it.  The inside game is where MSU lost; at times Costello, Schilling, Gauna and company were too far out to either back into the basket or effectively rebound off the offensive glass.

And here's your player bullets:

A bad loss to be sure, but there's three silver linings -- almost every team drops awful games at some point (remember the '08-'09 team's losses to Maryland, Penn State and Northwestern?), Payne should be back soon with Dawson not too far behind, and that hopefully this experience will be the kick in the butt this team needs to keep up with Michigan in the second half of the Big Ten season.
If this team had to have a come to Earth moment, at least it's now.  Here's to wishing they take the hurt and channel it into a win against Penn State on Thursday.