Another game without Keith Appling and Branden Dawson was no problem for the Spartans, as the offense was in top form in a victory over the Wildcats.

Halfway through the first half, it looked like Michigan State was going to get Coble'd again. JerShon Cobb was sinking everything from behind 20 feet, giving life to a Wildcats offense that had looked moribund for months. If the Wildcats kept up the scoring and played their newfound stingy defense, it could be 2009 all over again.

And in a way, it was 2009, in that while the Wildcats did keep up the scoring, their 2014 defense was nowhere to be found.  The Spartans' outside shooting returned after a lacking performance in Madison, as MSU went 11-21 from behind the arc. Michigan State's heat reached its peak at the start of the second half:

In a night where the Wildcats' offense was working well enough to pull off the upset and get their fourth straight road win (Northwestern basketball had not won four straight on the road SINCE 1930), the Green and White stopped the Wildcats any time they tried to make a run, and cruised to a victory that covered the 14 point spread.

Here is the four factors graph: 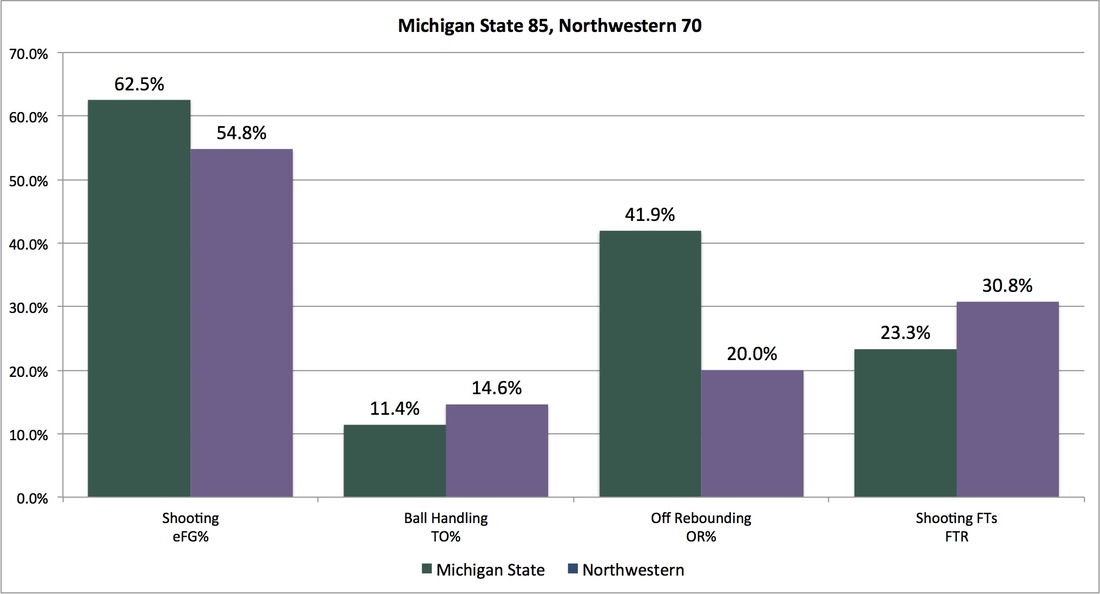 That's a prototypical Tom Izzo team line if I ever saw one, minus the turnover percentage below 20%.  Granted Northwestern shot better than normal tonight (46.0 was their eFG% coming into tonight, one of the worst 50 in Division 10), but offensive rebounding was the big difference in the game.

And here are your player bullets:

This was the first of three games the Spartans needed to win before Michigan in a week and a half, and while Michigan has to deal with Wisconsin in Ann Arbor on Sunday, Michigan State faces a frisky Nebraska team that has beaten Ohio State this year.  Let's hope for a one-game lead for the Spartans in the Big Ten 72 hours from now.