These are the times that try a wonk's soul.

The story of the season to date has, of course, been injuries.  All but one of MSU's top seven players have missed at least two games due to injury or illness, combining for 27 missed games over the team's 26 games.  I forget exactly where we are on the number of starting lineups Tom Izzo has used, but it's in the double digits.

Given all that, Luke Winn's observation last week that it's difficult to evaluate this team rings true.  Set aside the question of the degree to which injuries can be blamed for the team's recent struggles, how do you even start to analyze what their weaknesses are?

To illustrate: Going into yesterday's game, KenPom had MSU at #13 in the nation in adjusted offensive efficiency.  That's a higher rank than the team has achieved in any season since 2005.  So that's pretty good.  Then yesterday happened.  Now the team ranks 26th in adjusted offensive efficiency.  Now, that's still two spots higher than last year, but it's nothing to write home about.

So has the team been good on offense--despite the injuries--or not?  One game changes the entire complexion.

Here's a broader picture of the team's game-to-game fluctuations in performance so far this year (I've removed all opponents ranked below #200 by KenPom): 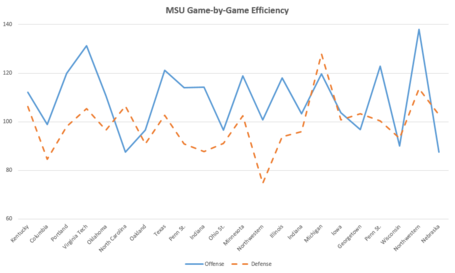 Defensively, the team played pretty consistently through the start of conference play, rarely allowing teams to score above a point per possession and not conceding any major offensive explosions.  More recently, though, opponents have regularly hit the point-per-possession mark, and two teams have exceeded 1.1 points per possession.  Michigan is explicable; Northwestern is not.

The team now ranks #20 in adjusted defensive efficiency, after spending most of the season closer to #10.  On the other hand, the defensive rebounding has vastly improved following Adreian Payne's return.  The last four opponents have all been held to 25% or below on the offensive glass.  So, like, I dunno.

On offense, it's been a yo yo all season.  In Big Ten play, it's been a perfect pattern of peaks and valleys every other game since the first Indiana game, two games into conference play.  (The Georgetown game goofs things up visually.)  If you can find the single factor that explains which teams MSU has scored against and which teams they haven't, you're a smarter wonk than I.

All of this is merely to say that the next four to seven weeks are going to be even more interesting than they usually are.  If everyone, in fact, gets healthy by the end of the regular season, it remains to be seen how (or, gulp, if) the pieces all fit together.  The ceiling remains as high as it did to start the year.  But that ceiling has yet to be reached for more than 20 minutes or so at a time.

Maybe this is the team that nearly blew Kentucky off the court in the first half, handled Texas with ease, and gutted out a win in Iowa City.

But it could also be the team that's now laid a massive egg in two home games, while falling apart late in three other home contests (salvaging two of those in overtime).

I don't think we should read too much into the Nebraska loss.  Weird stuff happens in the middle of Big Ten play, and this MSU season qualifies as extra weird.  But the problem is that there's not too much to read into any of the prior data.  I guess we'll just keep watching the games.