On a night critical to MSU's conference title hopes, the Spartans proved their mettle -- by setting a school record for threes made in a game.

Share All sharing options for: Michigan State 94, Purdue 79 -- On Toughn3ss

Toughness. That was the narrative running throughout the Spartan fanbase since the unexpected loss to Nebraska on Sunday.  Were these Spartans tough enough to be national champions, let alone Big Ten champions?  How could a team, look so lackadaisical, at home no less, against a traditionally poor basketball school? Did they have enough grit, desire, and every other intangible one could list?

Turns out the Spartans were just fine. They proved their title bonafides tonight not by great defense nor great rebounding - they just shot the everliving heck out of the ball. MSU made 17 threes out of 32 attempts, setting a new school record and tying a Big Ten single game record.

In retrospect, it was ridiculous that this team's toughness was ever questioned -- the effort, sure, but toughness? You mean the team that had blew leads against Ohio State and Minnesota, yet came back to win in overtime? The team that had two of their top four players injured, but somehow pulled out a win against Iowa in Carver-Hawkeye Arena?

It's basketball. Weird results happen.  The 2008-2009 team lost to Penn State AND Northwestern at home, yet went on to the National title game. That team was led by Travis Walton, one of the prototypical "tough" Spartans. When a basketball team plays 35-40 games a season, anomalies will happen, and the Nebraska game was just that -- an anomaly.

Let's take a look at the four factors: 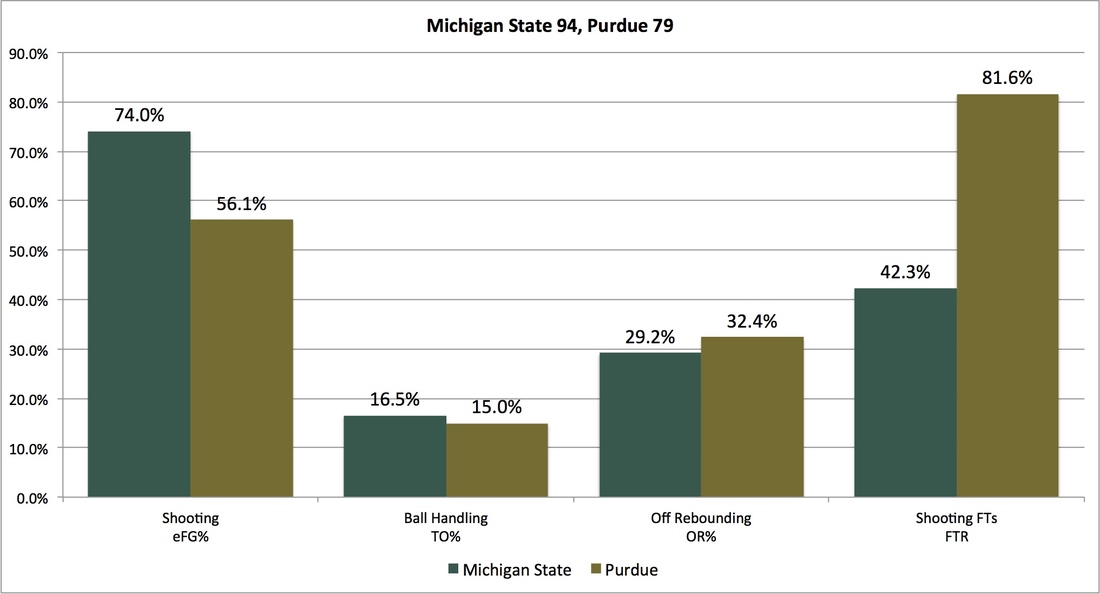 Look at that eFG% for Michigan State. Brave men and women died summiting that bar graph to bring it to you. Not just hot, extremely hot shooting saved MSU's behind today, because Purdue went to the free throw line 40 times in this game, and shot well of their own volition. In fact, MSU's defense hasn't been up to snuff lately:

This looks likely to be the 7th game in the last 8 where MSU's defense gives up more than 1 point per trip. Major issues.

And sure enough it was, as MSU gave up 1.18 points per possession to the 8th best offense in Big Ten play. If you want to rail against MSU's supposed lack of "toughness", there's your smoking gun.  The Spartans got their way out of a possible upset by having a historic shooting night, but that defense won't cut it in Ann Arbor on Sunday.

A record-setting night for sure, but also with defensive blemishes once again. Given the Wolverines' easier schedule to MSU's after Sunday's game (@ Purdue, Minnesota, @ Illinois, Indiana), the Spartans absolutely need a victory in Ann Arbor Sunday to realistically stay in the Big Ten title picture.  Here's to sweet revenge come the weekend.