The Spartans not only survived a game without Keith Appling, they thrived in a rout of Penn State.

About an hour before the game, it was announced that Keith Appling would not play due to issues with his wrist.  I had a flashback to 2009, where the Nittany Lions got a huge game from Talor Battle to win 72-68 in the Breslin Center. Luckily Adreian Payne would return in this game, his foot finally healthy enough to play. My hope was that Payne could provide enough of a spark to grind out another victory against a PSU team that had won three straight, one of those against OSU in Columbus.

It wasn't a grind at all. It was a buzz saw.

Payne's post moves had no rust. Kenny Kaminski's torrid shooting form returned. Denzel Valentine was all over the court, collecting rebounds and distributing assists, flirting with a triple-double all the while. Matt Costello was patient, getting lay-ups after shot fakes. Gary Harris was cold at first, but soon found his stroke.  In sum, this was one of the top three team performances of the season, up there with the wins at Iowa a week and a half ago and against Kentucky.

Here are the four factors: 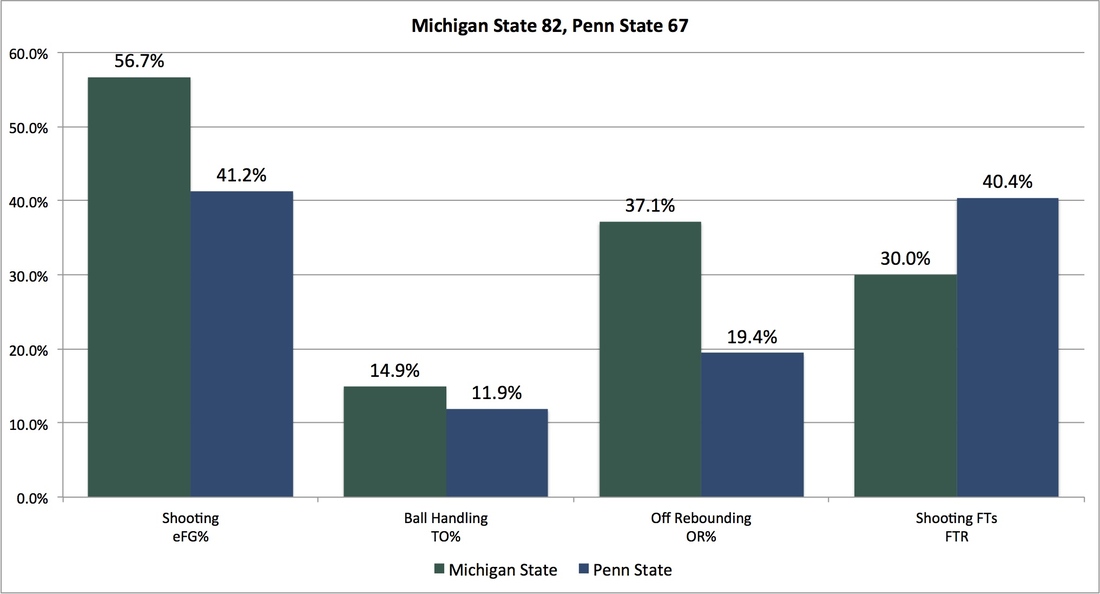 If the title didn't tip you off (that's a little basketball pun), the Spartans thoroughly outclassed the Nittany Lions on the boards, and did a great job of clogging the inside, leaving PSU to settle for outside shots.

And the player bullets:

Next comes a game at Wisconsin on Sunday. Even though the Badgers have looked mortal in Madison this season (Northwestern, seriously? I mean, I know they've improved, but the Wildcats?), missing Appling will make toppling the Badgers as difficult as usual. Still, if the Spartans are going to take the conference (especially outright), there's a sense that this is a must-win game with Michigan not showing signs of slowing down.