The 2014 Michigan State basketball season has not exactly played to form so far.

--MSU takes on all-comers in November and December. They don't look so great in the process, leaving plenty of room for improvement.

--The Big Ten season is aesthetically displeasing, but MSU shows marked statistical improvement and is at least in contention for the conference title late in the race.

--Tom Izzo works his magic in March, everything comes together, and the team makes a serious run at the final weekend of the tournament.

I did my blogger dissertation on this topic and found that this was a real thing, with like numbers and everything to back it up.

This year has been the MSU basketball season from the bizarro universe.  The team flirted with a perfect preconference record (11-1) and leapt out to a 6-0 Big Ten start, but has lost all that momentum down the stretch, going just 5-7 to finish the regular season.

Now, the 17-1 record to start the season masked some issues, as MSU won some close games that probably shouldn't been so close.  And, as Mr. Pomeroy has noted, the early win versus Kentucky doesn't look nearly as shiny as it did initally.  Finally, I am contractually obligated to note the role that injuries have played a significant role in this season's strange ride.

Still, the team has had its full lineup available for the last three games.  The results haven't been world-beating: a home loss to a team that won't make the NCAA tournament, a home win over a team that will, and a narrow road loss to a solid tournament team.

Perhaps more disconcerting is the areas in which MSU has struggled of late.  My 2011 study found that most of the improvement an Izzo team makes over the course of the season is concentrated in two areas:

MSU shows pretty dramatic improvement on both offense and defense: over 2.5 points per 100 possessions. On offense, it's all about turnovers. The team's TO rate declines from a dismal 22.9 percent in non-conference play to a much more respectable 19.4 percent in tournament play. On defense, it's mostly about FG defense. Opponents go from shooting over 50 percent from the field (an effective FG percentage of 50.8) to shooting well below it (47.4).

This season, we're seeing exactly the opposite: 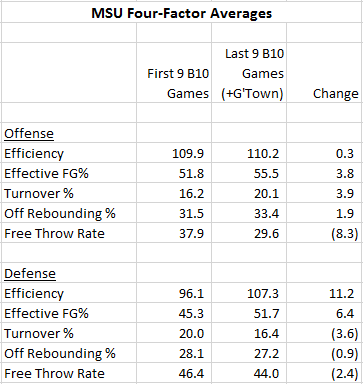 Overall, the team has maintained the same level of offensive efficiency (on average, at least) throughout conference play--but there's been a marked uptick in turnovers of late.  The team has turned the ball over on 24 percent-plus of its possessions in three straight games now.  That's not the sign of a team that's building cohesion on offense.

Defensively, meanwhile, the team has shown dramatic regression.  And it's mainly been simply a function of giving up too many easy shots.  Poor rotation on defense has led to a lot of easy baskets in the lane, plus teams have been hot from beyond the arc.  MSU's opponents have posted an effective field goal percentage above 50% in five straight games (and seven of the last eight).  This is also not the kind of thing you want to see going into the one-and-done portion of the season.

If you're looking for the escape clause here it's that, even at its best, this team was a statistical outlier relative to previous Izzo teams.  It's a more athletic, perimeter-oriented, defensively-aggressive, and experienced group.  With two seniors and as gifted and instinctive a sophomore as Izzo has ever had leading the way, maybe it can all snap back into place quickly.  But, if this team is to continue to playing basketball beyond the next two weekends, they will have to take a much different road to get there than past Spartan squads have.