The quarterfinals play out in Indy today. Come follow the action in our open thread!

There was one big upset yesterday in the Big Ten Tournament, but it wasn't PSU over Minnesota like I predicted. Instead, Northwestern, a team that lost to Iowa by 26 in both of their previous games, beat the Hawkeyes.  Hopefully the feel-good story for the Wildcats ends tonight, but until MSU-NW, three other games will be played. We'll have a separate open thread for Michigan State-Northwestern, but until then, here's brief previews of those three contests. 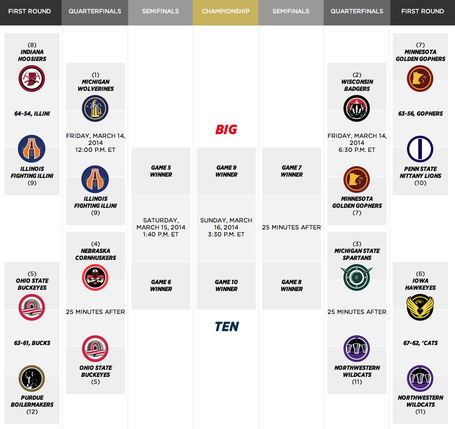 The Wolverines are probably relieved that they dodged a team that beat them once and played them tough another time in Indiana. Instead of the Hoosiers, Michigan will play Illinois. The Illini have won five of their last six, but that one loss? That was an 84-53 whoopin' by Michigan in Champaign a little more than a week ago.  Yikes.  Tracy Abrams will have to have another game like he had against Indiana yesterday (25 points on 6-11 shooting, 2-5 from three) if Illinois wants to keep its tiny NCAA tournament hopes alive.

KENPOM HAS: Michigan 65, Illinois 60, with the Wolverines given a 75% chance to win.

VEGAS HAS: Michigan from -7 to -8, depending on the casino.

WE SAY: Michigan 75, Illinois 65. The Illini have to play better than in their last game against Michigan, if only because the laws of statistics and probability dictate it. Illinois gets closer, but not close enough.

The shock has finally worn off for most of us (well, at least myself), and it's no longer physically jarring to see the number 4 next to Nebraska, and not have it refer to the number of losses for its football team.  They'll play a Buckeye team that struggled to beat Purdue, but don't take my word for it. These two teams split their season series, with OSU winning 84-53 in Columbus in early January. Nebraska returned the favor 16 days later, winning 68-62 in Lincoln. In yesterday's win, the Buckeyes went 1-14 from three point range. Inaccuracy like that isn't going to get it done against the Cornhuskers, right? Right?

KENPOM HAS: Ohio State 63, Nebraska 60. The Buckeyes have a 66% probability of prevailing.

WE SAY: Nebraska 57, Ohio State 56. No logical reason, just that something weird usually happens Thursday and Friday in the Big Ten Tourney, and this is probably where it'll happen.

Minnesota earned the right to play the Badgers by beating Penn State yesterday 63-56. Don't let the final score deceive - the Nittany Lions were never really in the game and Minnesota led by as much as 14 midway through the second half.  The Golden Gophers have played Wisconsin twice already, with Minnesota winning 81-68 in the Barn, and Wisconsin winning 78-70 in Madison. The Badgers have historically performed well in the Big Ten Tournament under Bo Ryan, but that performance comes with one major blemish. On Big Ten Tournament Friday three years ago, the Badgers lost possibly the worst BTT game ever played: Penn State 36, Wisconsin 33. It makes me nauseous just thinking about it.

WE SAY: Wisconsin 72, Minnesota 71. The X-factor in this matchup: A win here might put Minny off the NCAA Tournament bubble in a very good way. However, with Villanova's early exit to Seton Hall in the Big East tournament, A #1 seed is in play for the Badgers. This is your game of the day.

Here's a link to our preview, in case you missed it.

KENPOM HAS: Michigan State 64, Northwestern 55. The Spartans have an 85% chance of winning.

WE SAY: I'm half-tempted to give a "both teams will play hard and have fun" prediction due to a fear of jinxing it, but nuts to that -- MSU 62, NW 55. The first game was an offensive nightmare, the second game defensively so, this game falls somewhere in between those two.

This is your open thread for the quarterfinals of the Big Ten Tournament. Same three rules as always - no links to illegal game streams, no slurs, and don't feed the trolls. Enjoy the games everyone.