March 14, 2014 - the date the ball began rolling for Michigan State in a demolition of Northwestern. Where it stops? That's up to the Spartans.

Share All sharing options for: Michigan State 67, Northwestern 51 - Two Halves Down, 16 to Go

Coming off a loss to Ohio State where the Spartans collapsed in the last five minutes, Michigan State needed not just a win, but a confident performance in all phases of the game to build momentum for a postseason run. The first seven or eight minutes seemed to repeat the first matchup of the Spartans and Wildcats -- Northwestern dictating the pace, with the Purple and White hoping that the first team to 50 would win.

Then there were under 10 minutes to go in the first half, and everything coalesced.

Branden Dawson was not just an offensive rebounder -- he followed up his rebounds with open mid-range jumpers, and made a majority of them. Gary Harris not just made shots, but rebounded and found the open player as well. Keith Appling turned it over to be sure, but also drove the lane for lay-ups. The only thing inaccurate about Denzel Valentine's game was his shooting tonight, as he once again was a rebounding and distributed force. Kenny Kaminski had only two shots - but made both of them from behind the three point arc.

More than anything, it was a team performance, one I can't communicate through statistics. I can only tell you that this was the most fluid this Spartan team has been in a month, at least for the first 30 minutes.  And while the Wisconsin Badgers will be a much tougher test of the Spartans mettle, the Green and White, in the throwback uniforms from the title winning '79 team, showed the flashes of what could be a title game. The next steps: exhibiting those flashes against greater competition.

Here are the four factors: 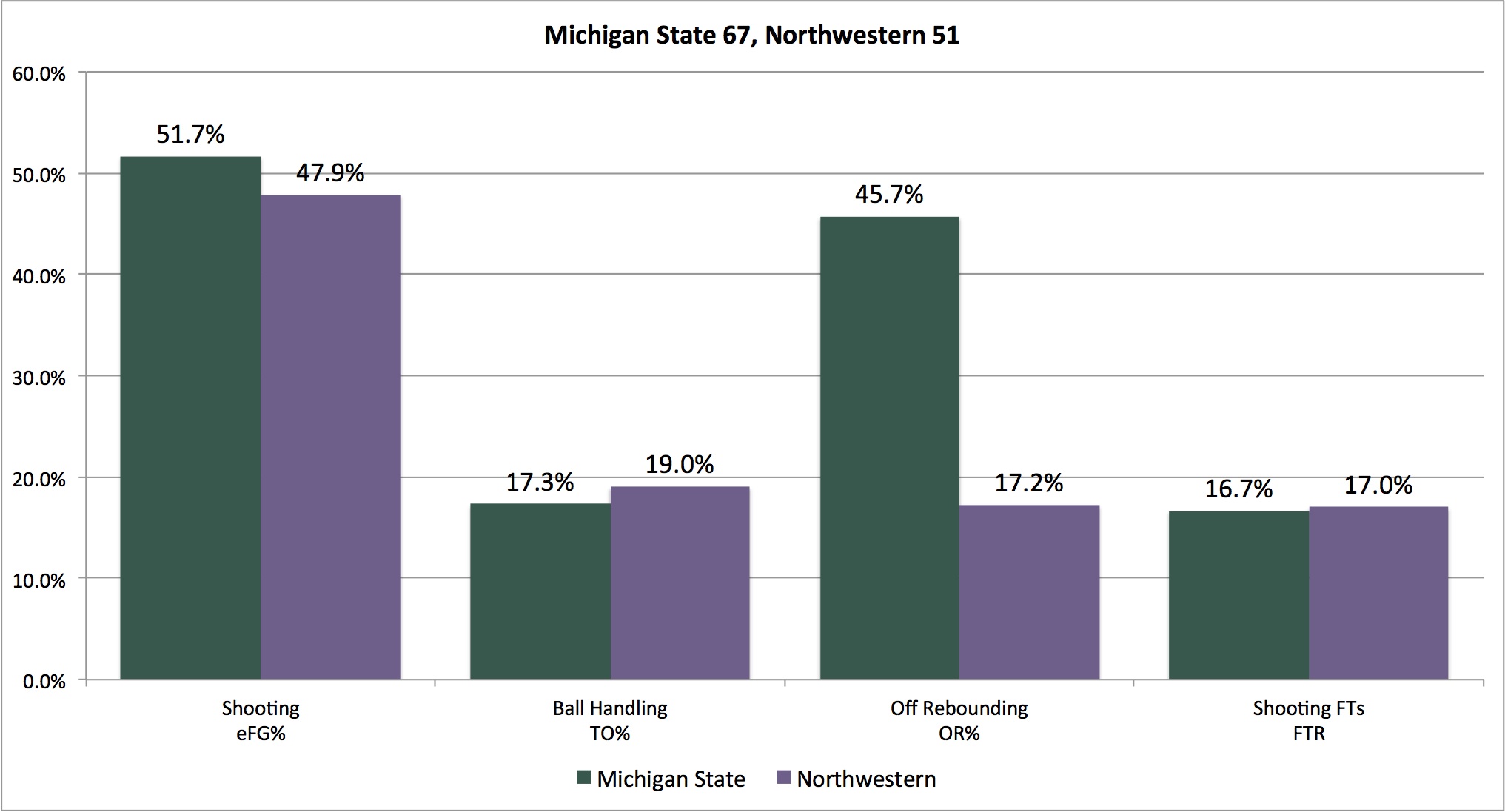 If you were looking for a throwback performance, you found it. MSU's offensive rebounding in this game (particularly Dawson's - he had 6 of MSU's 16 offensive boards) made the majority of the difference. It should also be said that the Spartan defense looked great as well for the first 25-30 minutes of the game; granted Northwestern is the worst offensive team in the Big Ten, but they sure didn't look like it a month ago when they put 70 up against MSU in East Lansing.

The Spartans now go on to play Wisconsin in the Big Ten semis tomorrow. The Badgers beat MSU on a late Traevon Jackson jumper a few weeks ago, and I've got a feeling it's time to settle the score. Go Green, Go White, eight more games to go.