After a beatdown of Northwestern in which Michigan State looked like themselves for the first time in maybe two months, the Spartans really turned on the afterburners in the first half against Wisconsin.

1:42 into the game, it was already 7-0 and Wisconsin called timeout to stop the bleeding. A 16-1 run starting around the 10-minute mark pushed the lead up to 37-16. From there, it was mostly cruise control; Wisconsin didn't get the lead back down to single digits until just 7:45 remained in the game, and it never got closer than six (that only in the final 10 seconds). As a result, MSU gets one more game before the NCAA tournament, and it's the first-ever Big Ten tournament game against Michigan. 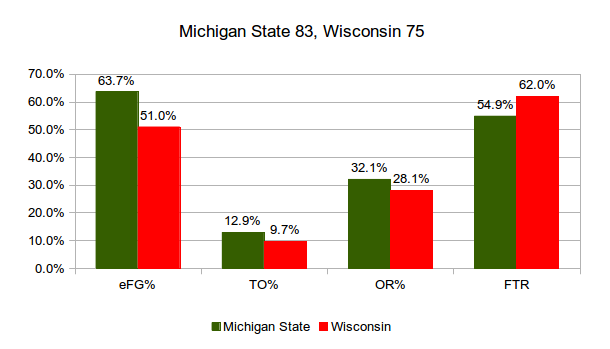 MSU shot a blistering 53.8% (7/13) from behind the arc. Both teams took care of the ball well and got to the free throw line a lot (MSU mainly at the end of the game during the inevitable trailing-team foul parade).