How much stock should we put in Michigan State's recent run of good play going into the NCAA tournament? 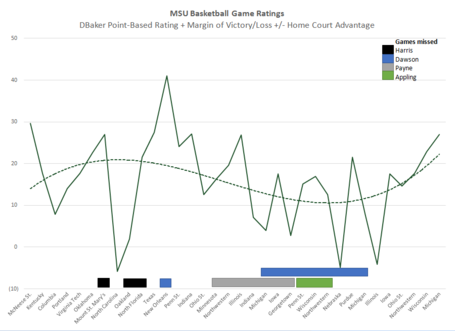 These are based on Dan's margin-aware ratings, since they include a handy point-based scale. This basically measures performance relative to an average D-1 team on a neutral court.  A score of 10 puts you at roughly #40 in the nation: 15 puts you at about  #10; 20 puts you near the #1 spot.  You don't want to read too much into any one data point, particularly in light of what can happen in garbage time of blowouts, but the overall trends should tell us something on at least a descriptive level.

You can argue the trendline I've included has some #narrative built into it.  It's a third-order polynomial trendline, meaning it's allowed to bend twice.  So the story is that MSU played like a top ten team in the preconference season (with one major hiccup along the way), fell off significantly in conference play as injuries took their toll, and has surged back to national contender status with the full lineup back in place.  (Note: I only showed injuries for the Big Four; didn't include games missed by Trice, Kaminski, and Costello.)

That story is an oversimplifcation, but it fits the data quite well--particularly if you consider that Keith Appling has only gradually become a positive factor since his return.

That Illinois clunker is still too close in the rear view mirror for comfort, but the team has been on a marked upswing over the five games since (even the narrow road loss to Ohio State doesn't look too bad here).  As Mr. Hanner pointed out in his column today, recent performance hasn't been a very good predictor of NCAA success in the past. But, in this case, winning the conference tournament in three straight not-that-close games helps confirm the possibility of performance levels we saw earlier in the season.  At worst--with no spin applied whatsoever--MSU is back up to #10 in the country in efficiency over the full season.

Here's another way to look at it, courtesy of the Magnificent Mr. Mac: Going back to 1985, he found 51 major conference tournament champions who won all their conference tournament games by 7+ points (3-possessions).* 19 of those teams made the Final Four, 11 made the championship game, and 6 won the whole thing.  Those numbers are in line with the odds for the top few teams this year.

TL;DR: Playing well in your most recent games is no guarantee of success going into the NCAA tournament (a competition that comes with no guarantees to start with). But it sure beats playing poorly.