What to do with Keith

Keith Appling has been back on the court for four games now since since sitting out a stretch of three games due to the worsening of his near-season-long wrist injury.  In those four games:

--He's scored just 14 points on 12 field goal attempts (6 of those points came on 3 shots in the final 2 minutes against Michigan, when the game was already effectively over).

--He's posted 15 assists (9 of them in the blowout win over Purdue) while turning the ball over 12 times.

Those are not numbers that make an offense go.  As others have noted, on a team with numerous questions marks at this late date, Appling's return to form is question mark number one.  Tom Izzo talked about the need to get Appling more reps as the NCAA tournament draws near, but those reps don't seem to be doing anything for either him or the team.

So what about this option: Give the keys back to Travis Trice as the lead point guard, with Denzel Valentine backing him up.  Looking at the numbers, Trice and Valentine were very efficient when Appling was out, but have both taken significant steps backwards with Appling back in the lineup. 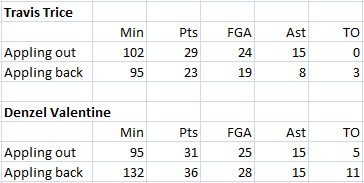 Those numbers are, of course, subject to the small-sample-size caveat that accompanies much of what we do here, but it sure looks like Trice and Valentine were more comfortable initiating offense as primary ball-handlers.  They combined for 30 assists and 5 turnovers in the three games Appling was out--vs. 23 assists and 14 turnovers in the four games since.  For a team that's struggled all year to find consistency in its halfcourt offense, Appling's return at well below 100% playing ability has added another level of uncertainty about offensive roles.

(This team's problems aren't limited to offensive inconsistency, of course.  Defense has been the main problem in the recent stretch of losses.  Hopefully, Saturday's loss was actually a step in the right direction on that end, as the team created turnovers at a high rate for the first time in a while and locked down the defensive glass.)

Appling has said he's not experiencing physical pain now shooting the ball--that it's just a matter of refinding his form.  So maybe he's not that far off from being somewhere close to his old self.  That's obviously the ideal path to March success.

On the other hand, it's been three months since Appling first starting having problems with his wrist.  Is another two weeks enough?  We're down to just three guaranteed games left before the NCAA tournament opener.

On a team with two experienced future first round NBA picks available to carry the scoring burden, going with healthier, albeit-more-limited options as the primary ball-handlers seems like a reasonable option to at least consider.  Appling could still play some minutes off the ball (15-25, depending on whether the opponent is playing zone defense) and see how his wrist responds.  This isn't about Appling's toughness--he's proven that throughout his career--it's about putting players in the best position to maximize their abilities right now.

Bare minimum, they've got to start consistently putting the ball in Gary Harris' hands late in the shot clock.  Harris is already doing an awful lot--he took 10 more shots than any other Spartan on Saturday--but it appears he's going to need to do even more if this team is going to emerge out of this late season nosedive and find a way to raise a banner.

Of course, only one man can make the decision about how to play things out over the remainder of the season.  Tom Izzo has certainly proven through the years that he has better judgment than we do.  Hopefully, he has better information, too, because we're only a couple weeks away from the what-ifs becoming what-could-have-beens.