In a game plagued with stoppages, the Spartans used their offensive firepower and a whole lotta Payne to move on to play Harvard in the Round of 32.

Midway through the first half, Michigan State looked unstoppable - all the threes were falling, the Spartans were rebounding the crap out of the ball, and Adreian Payne looked invincible.  Then the Spartans began to get in foul trouble, and the Blue Hens went on a 12-0 run. Adreian Payne looked invincible. The second half began, and the refs began to call the game more tightly, more players fell into foul trouble, and Delaware was in the double bonus with more than 10 minutes left in the second half.

Luckily, Adreian Payne was still invincible. He was invincible for the totality of this game, and he (along with an excellent second half contribution from Travis Trice) beat Delaware 93-78 to put Michigan State in the round of 32 to face Harvard and our old friend Tommy Amaker. How good was Payne?

Here are your four factors: 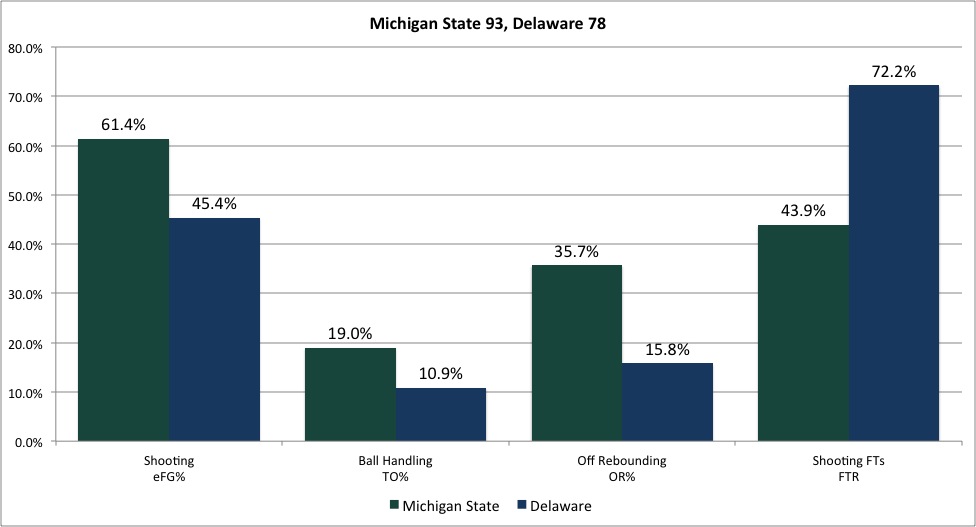 In short - there were a lot of fouls called today. MSU did themselves no favors with their frequent turnovers (especially in the first half), but, as Tom Izzo teams are want to do, made up for it on the offensive boards. The hot shooting definitely helped, especially by one Travis Trice -- for that period when Payne wasn't carrying the Spartans in the second half, Trice definitely was, he had 19 points on 7-8 shooting, 3-4 from three. Mark another record in the books: Travis Trice was 4-4 on two pointers in the game.

State's next opponent is 12 seed Harvard. The Crimson upset the Cincinnati Bearcats 61-57 today, which means Tom Izzo will get to see Tommy Amaker one more time. The game will tip at some time on Saturday (we're not sure at what time yet, but I'd wager later given Spokane's in the Pacific time zone), and let's hope history repeats itself like it did at the start of the millennium.