Michigan State need to dial back the physicality on defense

So things are going, how you say, well.  Five postseason games, five postseason wins.  And the team's surge has come nearly across the board statistically:

--They've held turnovers under the 20% mark in all five games.

--They've out rebounded their opponent in all five games (by over 10 percentage points in three of them).

The one remaining area of statistical concern is letting opponents get to the free throw line.  In three of the five postseason games, MSU has allowed a free throw rate (free throw attempts divided by field goal attempts) above 50.  That includes both NCAA tournament games.

This is a continuation of a longer-term trend: 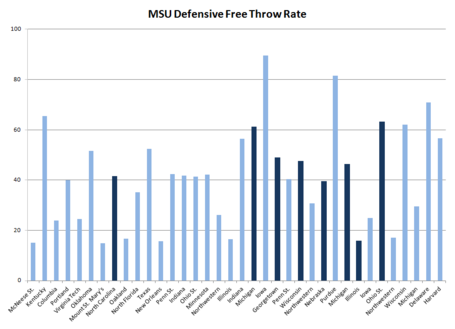 Over the team's first 18 games, its average defensive free throw rate was 33.7.  Over the last 18 games, the average has been 49.1.  That's a sizable increase, which can't all be explained by a more difficult slate of opponents and/or more losses (in which MSU would have committed some extra fouls on purpose late in the game). It also runs against the trend of fouls declining as the season progresses and players adjust to the tighter officiating. For the season, MSU ranks a mediocre #172 in defensive free throw rate, its lowest rank since 2011.

Alex from the Twitter posted this graphic today, which illustrates that MSU's defensive performance is more dependent on limiting opposing free throw attempts than any other team in the Sweet Sixteen: 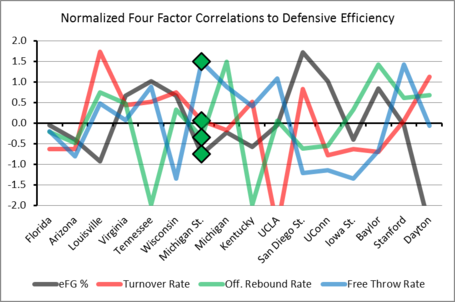 Obviously, this is easier said than done.  MSU's defense is designed to limit penetration on the perimeter.  And its offense feasts on turning turnovers into transition scoring opportunities.  This can lead to players being overly aggressive on bodying opposing players up and digging at the ball in and around the lane.

While defense is inherently a team-level activity, we can look at individual foul rates in the five postseason games: 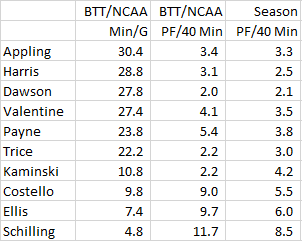 Among the starters, Denzel Valentine and Adreian Payne have been the biggest culprits (with Payne further above his season average).  When they've had to sit due to foul trouble, it's set off a chain reaction, as Alvin Ellis, Matt Costello, and Gavin Schilling have all fouled with high frequency during their time on the court.  Those three guys have all had issues with fouling over the full season, but are really struggling to match up defensively against postseason opponents.

(Note that, in addition to everything else he's doing, Branden Dawson is fouling at an extremely low rate while simultaneously serving as MSU's top individual defender.)

Yeah, there's a negative right now that I'm concerned with, we're in foul trouble all the time. I question some of it. I have all year. But I also appreciate that we're just doing some things that aren't as disciplined as they need to be done.

It's been over four months now since live play started with the new officiating emphases in place.  So it's now or never in terms of adjusting.

Going into Friday's game, Virginia doesn't look like a particularly terrible match-up from this particular angle (they look pretty darn scary from most of the angles on the other end of the court).  They rank just 105th in the nation in offensive free throw rate.  But they do play at a extremely deliberate pace offensively (#321 in average possession length), meaning MSU will have to defend for long chunks of clock without committing ill-advised bumps or reaches.  If they can do that, it could put the final piece in the puzzle.