In a game crucial to the Spartans' psyche, the Green and White put together one of the best halves of the season to sweep Iowa and clinch a first round Big Ten Tournament bye.

Share All sharing options for: Michigan State 86, Iowa 76 -- How a Resurrection Really Feels

38 days. That's how long it's been since MSU last beat Iowa, most likely the Spartans' last performance of championship caliber. While MSU did set a school record for treys in a game in that span, the Boilermakers, the seventh best offense in the Big Ten per KenPom, put up 1.18 points per possession. As one can tell, definitely not the defensive performance of a title contender. After the loss to Illinois, the Spartans desperately needed to show their quality.

And did they ever, especially in the second half.  This was a throwback Spartan performance in almost all aspects of the game. The offense was very effective when it wasn't committing turnovers (9 in 35 first half possessions). The defense was great...when it remembered that opposing players without the ball could contribute. Even though they shot over 50% in the first half, the Spartans left the court down by two.  If the next 20 minutes weren't Michigan State's best of the season, they were easily the most redemptive.

After four (4!) fouls on one possession early in the second half, the fire was lit.  Keith Appling regained his shooting form both on lay-ups and from the outside. Branden Dawson contributed tip-ins and dunks. Travis Trice was efficient to the extreme, spurring the run midway through the second half that the Hawkeyes could not extinguish. The defense remembered the "help" part.

There were hiccups. Russell Byrd got ejected for coming off the bench when Travis Trice was thrown to the ground by Zach McCabe. I mentioned the first half turnovers. Michigan State's defensive rebounding was...well, you'll see. However, eclipsing all those issues was the energy the Spartans showed -- even when the help defense was nonexistent, the energy level never faltered in the second half.

In the end, the ball was purposefully put out of bounds. Keith and Adreian kissed center court, and so did Dan "The Chap" Chapman, the walk-on turned scholarship player. Truly it was everything a senior night should be.

Here are your four factors: 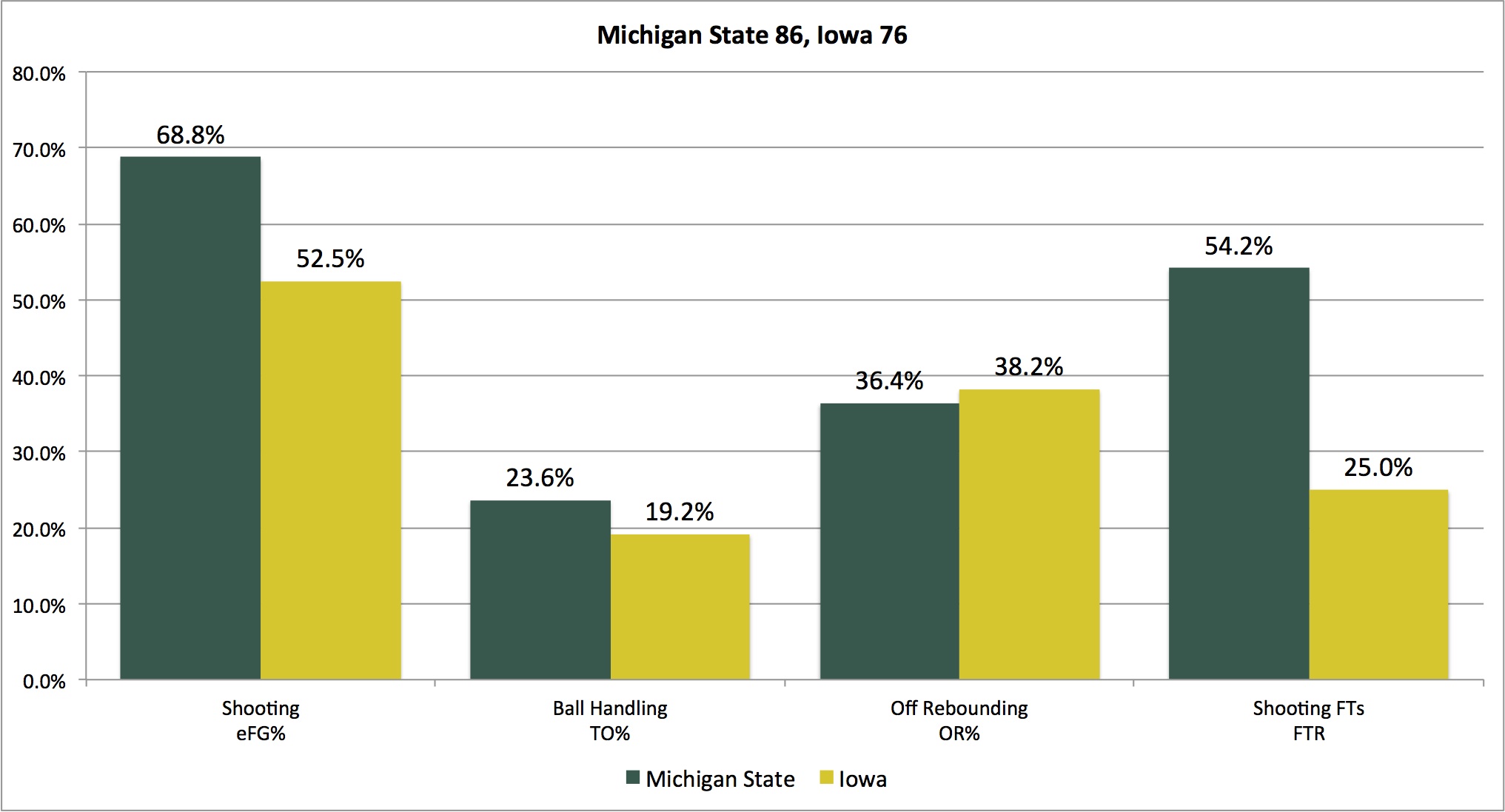 If you had said that Iowa would be in the bonus with about 13 minutes left in the second half and MSU would still double them up in free throw rate, I would've...well, I probably would've nodded and said "sure", because I'm polite. Still, I wouldn't have believed you. Iowa's offensive rebounding percentage is cause for concern in the coming games, but let's enjoy tonight.

Here are the player bullets:

As a result of the win, Michigan State has clinched a bye and at least the #3 seed in the Big Ten tournament, and can get the #2 seed with a MSU win against OSU in Columbus and a Wisconsin loss to Nebraska in Lincoln in Sunday (KenPom has the probability of this happening of ~13%. So not likely).  What's more important than who the Spartans are playing at this point, however, is if their momentum can be maintained. Can they be as effective offensively against the Big Ten's number one defense on the road? If they can, then it'll really be time to dream.