So let's step back for a moment. MSU was a 4-point underdog going into this game. They lost by 2.  This game didn't really tell us anything new about this team.

We knew this was a team capable of dominating quality opponents.  MSU demonstrated that with a 10-0 run to build a 7-point lead six minutes into the second half.

We also knew that this was a team that's been unable--whether due to injuries or a failure on its own part--to build a consistent offensive identity.  MSU demonstrated that by going scoreless in the game's final four and a half minutes.  All five of MSU's potential halfcourt playmakers took a shot at making something happen.  None came up with the key basket. In sequence:

--Branden Dawson missed a short jumper off a low post move (after scoring the team's last points off a similar move on the previous possession).

--Keith Appling missed a three-pointer (at least he didn't hesitate) on one possession and then turned the ball over trying to drive the lane on the next.

--Adreian Payne turned the ball over when he didn't respond to a double-team in the post quickly enough and then missed a three-pointer after hesitating mid-shot on the next possession.

--Denzel Valentine turned the ball over trying the drive the lane.

--Gary Harris missed a decent look at a long jumper in the final seconds.

The four factors chart also tells us a bunch of stuff we already knew. 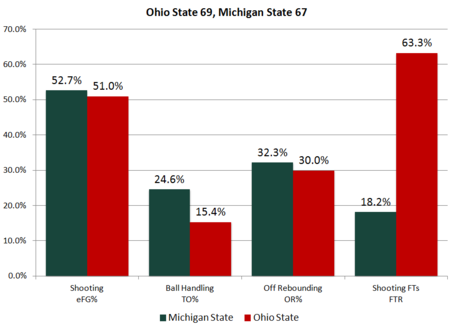 MSU can shoot the three (10 for 20) but struggles to create near the basket (14 for 35 on two-pointers).  They don't dominate the boards, and they've turned the ball over with frequency of late.  (Aaron Craft: 4 steals.  I'm happy to be done with both his abilities and his narrative.)  Last but not least, they continue to lose the free throw attempt battle.  The officiating was distinctly uneven in this one, but that doesn't explain a 21-attempt differential.

They are who we thought they are. I say that in part to calm everyone down.  But I also say it because it means this team has exactly a week and a half to become something that's a notch higher than what they've been.  They did it Thursday against Iowa.  They did it for about 35 minutes today.  You can at least squint your eyes and see a Final Four contender.  But the lens is going to focus tightly very soon here.

--Keith Appling ran the offense fairly effectively--6 assists vs. 3 turnovers--but he was unable to build on his scoring surge in the second half of the Iowa game. He scored a key basket with the clock running down to end the first half. And that was it, in 35 minutes on the court.  The question mark is still the question mark.

--Travis Trice was good at moments--6 points, 2 assists, 1 turnover--but the moments were limited.

--Denzel Valentine came out hot, scoring 8 points early, but then foul trouble forced him to sit. He's the guy that really makes things click when he's on, but he's got to learn to dial it back half a notch when things are going well.  He forced a bad three after making his first two off good catch-and-release opportunities.

--Gary Harris was blanketed by Shannon Scott in the first half. He played well in the second half, though.  He finished with 12 points, 4 assists, 2 turnovers, and 5 rebounds. The ball needs to be in his hands more late in shot clocks, though, given Appling's current state.

--Branden Dawon was limited by foul trouble, too. He couldn't convert some looks around the basket. He doesn't need a jumpshot, but he does need to refind his touch at the rim. Otherwise, his offensive rebounds (3 of them today) are for naught.  His limited minutes also helped create mismatches for LaQuinton Ross (22 points on 15 FGA).

--Adreian Payne, per usual, played at his best versus Ohio State. 23 points, 8 rebounds, 3 assists (one a gorgeous dime to Kaminski in the lane), 2 blocks. He now has 118 points in 9 career games versus the Buckeyes.  The one weakness was the 5 turnovers. He still struggles some with sensing double teams. He's at least as dangerous squared up to the basket on the perimeter with the floor spread as he is with his back the basket.  Regardless, he needs to take as many shots as the team can find him. So at least that went well today.

Next up is the dreaded late Friday game, after every other team has already taken the court, in Indianapolis. It'll be one of two teams that MSU has already beaten twice this year: Iowa or Northwestern.