Which Big Ten Basketball Team Really Lost the Most?

Taking a look at who gets the most #excuses for next year.

Share All sharing options for: Which Big Ten Basketball Team Really Lost the Most?

We're pleased to introduce the newest member of the TOC team: Joe Tuohey (AKA Jobin2EMSU). Joe has done some nifty stuff in FanPosts. You can expect similar stats-based fun (scatterplot!) from him on the front page now. Find him on Twitter at @Jobin2E. --KJ

[UPDATE: Seth Allen for Maryland is transferring. The chart has been updated]

With the early entry deadline past us, it’s time to take a look at who can make the most excuses for their team next year. While it’s difficult to get a good preview of each team at this point, we can at least determine what each team lost from their 2013-14 edition.

One way to make this evaluation is to look at win shares. Win shares are a way of estimating each player’s contribution in terms of number of wins, both offensively and defensively. In basketball, this estimation is based upon both offensive and defensive rating. If you sum up the win shares from each team, you will get a total that is roughly equal to that team’s total wins.

For additional information about Win Shares, please check out Sports Reference. My data is here.

From total win shares, we can obtain a percentage of returning win shares. For example, MSU loses Gary Harris, Keith Appling, Adreian Payne, and Dan Chapman. These four contributed 5.3, 3.7, 4.3, and 0.0 win shares respectively. As a team, MSU totaled 29.4 total win shares, which means that 16.1 of these win shares return. This is 54.76 percent (not great). 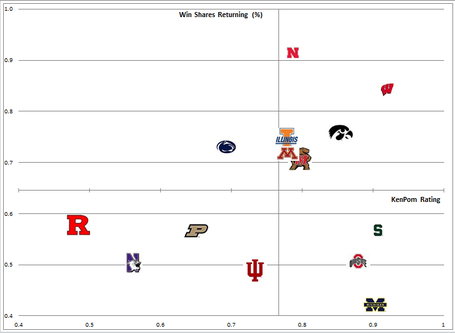 I’d like to split this up into five broad categories:

Let’s put it this way: Rutgers pulled the average KenPom rating for these teams down so far that Illinois appears above average. Welcome to the league, I guess.

I can’t wait for Branden Dawson to make the State of Indiana sour grapes tour one last time.

Really, the only major contributor Penn State loses is Tim Frazier. They seem like a much better bet to improve than any of the above quartet. The question, as always, is whether they can draw more than just a quartet to any of their games.

MSU has the pieces to improve significantly on defense, with a starting 5 of Matt Costello - Branden Dawson - Denzel Valentine - Alvin Ellis - Travis Trice. The offense will be fascinating to watch, with shot creation being the main issue. Unlike Michigan, however, there are many candidates to take on larger roles, which makes me optimistic. All of this assumes we don’t reach Izzo DefCon 1.

Wisconsin is terrifying. You knew this.

Maryland is an interesting team. They missed the tournament last year but they were 40th in the nation in KenPom rating. They have three four guys transferring, but return their top 3 contributors and 5 4 of their top 6. Mostly, they're not Rutgers.

In conclusion, the winner for the most #excuses next year? Michigan.