Dissecting the most statistically comparable players to Branden Dawson.

Alex introduces himself and his work below.  This is good stuff--along the lines of KenPom's player comps but restricted to Big Ten players so you actually know something about the comps.  Be nice. -KJ

I’ve read The Only Colors for a while now, and the things that KJ and the rest of the staff here put out on a consistent basis make this one of the best places for college basketball analysis out there. KJ reached out to me over Twitter and asked if I’d be interested in a series of guest posts – I devised a method to find the most similar statistical profiles to a given input; you plug in a player, and the statistical system (which is explained in-depth here) spits out the most comparable Big Ten players over the last seven seasons (2008-2014). If you’re interested, Dylan Burkhardt was kind enough to host some of my work over at UMHoops: here are my player comparables and analyses for Caris LeVert, Derrick Walton, Zak Irvin, and Spike Albrecht. Of course, I wouldn’t blame you if you didn’t care (although, there’s something about knowing thine enemy and all that).

I guess I should admit that I am indeed a Michigan fan, but I’ll try to be as reasonable and balanced with my analysis as possible. I’m sure you all have watched much more Michigan State hoops than I have, so if any of my assumptions or assertions are off-base, please let me know. TOC is an awesome – and very analytically-minded – community, which is why I accepted KJ’s invitation to post here without any hesitation. I hope you guys enjoy this stuff.

I was quite surprised to see so many Michigan players listed among Dawson’s comparable players (though I should note that they – relative to other comparisons for other players – are relatively further off, so basically Dawson is considered more unique than most players by the system). Here’s where my expertise as a Michigan fan could prove useful, and here’s an attempt at explaining why all four seasons of Jordan Morgan and one each of Mitch McGary and Jon Horford show up among Dawson’s ten most similar players.

John Beilein came to Michigan with the reputation of having five players who could shoot the ball at all times, and his motion sets were often predicated on having a shooting threat (think Kevin Pittsnogle, who Beilein coached at West Virginia on some dangerous NCAA Tournament teams). Deshawn Sims, even though he wasn’t a knockdown shooter by any means, filled that role as a stretch-five during his career. However, once Sims graduated and after Michigan overhauled its assistant coaching staff, Michigan went to more of a pick-and-roll-heavy scheme with centers pigeonholed into a very specific role: Michigan centers were tasked with setting screens, rotating the ball, and essentially only shooting the ball on feeds near the basket. It’s a simple, but effective role. They are also the only credible offensive rebounding threats, as Michigan frequently sends its other players back to play transition defense.

So what does that have to do with Dawson? In terms of a statistical profile, he isn’t that much different. His usage rate isn’t very high, but he is a very efficient offensive player who does his work around the rim for the most part. He gets good feeds on cuts, gets second-chance points with his outstanding rebounding ability (more on that later), and is generally a quite valuable complementary piece on offense. His turnover and assist rates are rather low and he doesn’t get to the free-throw line as much as you’d like, but that finishing ability is enough to give him plenty of value on the offensive end. In that way, he’s much like Michigan centers: he takes high-percentage looks, converts them, and really doesn’t do a whole lot else (although he does take a few midrange jumpers now and then). Jordan Morgan is a rather bizarre comparison, but it does make some sense when positional labels – which are often misleading: for example, look at Draymond Green’s all-around versatility and it makes it hard to classify him in the traditional one-through-five sense – are thrown out. Morgan was a good defender and Michigan played to his strengths by having him finish shots solely near the rim, similar to Dawson. I, like many Michigan fans, trumpeted the "Jordan Morgan was SO underrated" horn, so I’d consider him a rather fair suggestion for a statistical comparable to Dawson.

His rebounding rates are excellent for a smaller power forward. Dawson isn’t a stretch-four by any means (though State does have a good one in Kenny Kaminski), and he does play the three too: his efficiency and rebounding ability are extremely rare for someone at that size with the 3 / 4 tweener designation. I took a look at players with the most similar usage, true shooting percentage, and total rebounding rate to Dawson, with each of the categories rated equally: 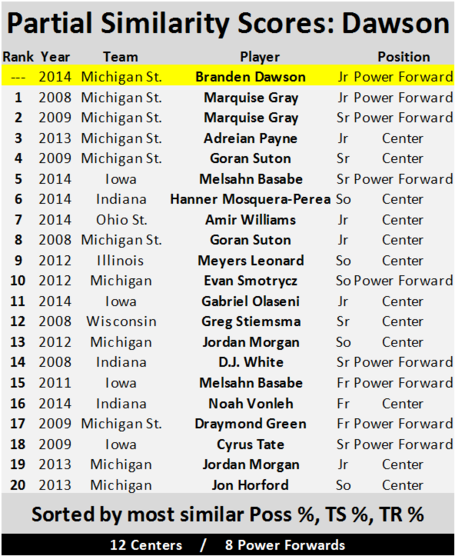 Twelve centers made the list, and nine out of the top thirteen closest were centers. Dawson obviously isn’t a center, but his rebounding is center-like. It merits mention that his steal and block rates are also quite solid; individual defense is generally sort of a statistical blind spot for basketball, but that corroborates the common assumption that Dawson is a very good defender (which I believe he is). Still, the largest takeaway from this analysis is this: the system spits out centers as the most comparable players because it sees Dawson’s rebounding and general offensive profile as center-like. In the large scheme of things, that’s probably a very good thing for State – spacing can be found with Travis Trice, Denzel Valentine and especially Kenny Kaminski, so having a swingman who does most of his damage near the basket doesn’t have many negative externalities. To state the obvious: having a rebounding machine is always helpful.

Izzo’s teams have always been known for their excellent work on the glass, so I took a look at the best MSU rebounders from my database (which doesn’t cover Izzo’s whole tenure, but does go back to 2008): 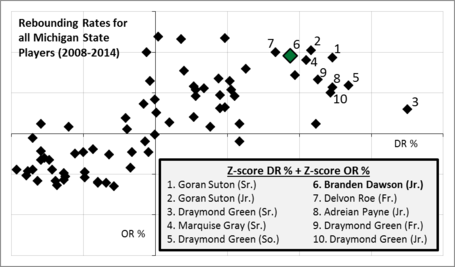 (Man, Draymond Green was a great player. He hates Michigan, but I still have such respect for his game. Not surprising to see him up there with the best rebounders, but he does so much more. What a great player.)

Goran Suton shows up again – his junior and senior seasons were Dawson’s first- and fifth-closest on the overall similarity scores respectively, and he also tallied the two best rebounding seasons of the last seven in East Lansing. Suton is a pretty favorable comparison for Dawson: after all, he provided a much more diverse offensive game and anchored some tremendous Spartan teams, so make of it what you will, I guess. The rebounding abilities are rather similar though. Tom Izzo is the king of developing late-career three-point shooting transformations, but I don’t really see Dawson shooting 44% from behind the arc like Suton did as a senior. Still, it’s an incredibly interesting comparison and I’m sure you guys will have some more insightful thoughts on it than I do.

At this point in his career, Dawson probably is who he is. To make it to the next level, he's going to have to find some offensive success on the outside and be able to credibly stretch the floor -- something he hasn't shown so far in East Lansing. Still, he's quite good as a college player: as efficient as you'd like, relentless on the glass, and disruptive on defense. Michigan State is in need of a primary offensive catalyst after the departures of Appling, Harris, and Payne, and Dawson almost certainly won't be that guy, but he still projects to be a valuable rotation piece that provides strong and necessary contributions away from the spotlight of being the number one guy. Goran Suton and Jordan Morgan are his most similar players over the last seven years of Big Ten basketball, make of that what you will.

The author of this post, Alex Cook, can be found at @alexcook616. Any comparison requests are more than welcome.