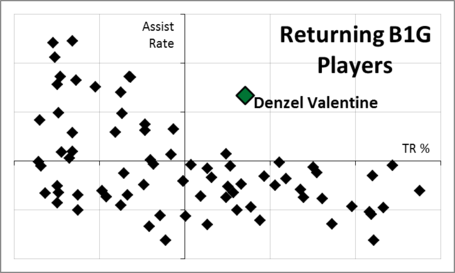 There’s only one other player returning in the Big Ten who has an above-average assist rate and total rebounding rate (it’s Purdue sophomore Raphael Davis, for the record), and even then, he barely falls into that first quadrant. Valentine is quite unusual.

With that caveat aside – that his assist rate probably can’t be taken into account in an accurate and appropriate manner – the comparisons might do well to give reasonable proxies for the other facets of his game. The closest comparison is Lenzelle Smith’s junior season – Smith actually tends to show up fairly often in these comparisons from what I’ve seen, and for good reason: he was a reasonably efficient wing with a decent usage rate, he didn’t turn it over much, and he was generally quite unremarkable, statistically speaking. Of course, that sort of statement minimizes what he contributed to Ohio State when he was there; Smith was a solid starter who was key in the Buckeyes’ smothering man-to-man defense, and his outside shooting (37% from three) was enough to space the floor. The biggest difference between he and Valentine are the assist and turnover rates, which seems intuitive.

Mike Bruesewitz was a surprising name for me, and I’ll try to make some sense of seeing his junior and senior years as two of the three most statistically similar seasons to Valentine’s sophomore campaign. Though Bruesewitz took a higher percentage of his shots from three and converted at a much lower rate, his high two-point percentage makes his and Valentine’s eFG % and TS % pretty equivalent. Valentine had a higher usage rate – logical, given his higher assist rate, but neither were the primary or even secondary options on their teams in terms of the number of shots allocated to them. Bruesewitz crashed the offensive boards more, but Valentine did better on the defensive glass: essentially a wash. In the end, their efficiencies are pretty similar also.

Bruesewitz is an outside-the-box comparison for Valentine, but from an extremely simplified perspective, it becomes a little clearer – they were role players, wings who contributed complementary things (scoring, rebounding, etc.) at fairly efficient rates, but they did so in slightly different ways. Crucially, Valentine was just a sophomore and there’s ample opportunity and time for him to improve, while Bruesewitz sort of maxed-out as your quintessentially aggravating Wisconsin role player, obnoxious hair and all.

Valentine’s statistical profile tends to spit out a lot of middle-of-the-road wings: Shavon Shields (as a freshman) shows up on the list, and he improved greatly after shifting to a secondary scoring role with the addition of Terran Petteway last year, but even as a freshman, his ability to get to the line was quite apparent. Jamarcus Ellis was a weird combo guard who played one year alongside Eric Gordon on Kelvin Sampson’s last, ill-fated Indiana team; he rebounded and contributed assists, but was a pretty terrible and seldom-used shooter. Jared Swopshire, Micheal Flowers, and Caleb Walker were a trio of role-player wings (though I guess Flowers was more of a small SG with combo-guard tendencies at times) – Swopshire and Flowers were efficient, Walker was not. Eric May’s freshman year shows up, and he never became much more than a minimally impactful rotation guy, though he did see a small spike in efficiency as a senior.

Since these names probably won’t get you guys very excited, here’s a list of all the seasons in the database where a player was one standard deviation above the mean for both assist rate and defensive rebounding rate:

With the exception of Ellis, it’s some great company: Evan Turner’s NPOY season, Manny Harris’s best year, and three years of Draymond Green. Obviously usage rate is the biggest difference between Valentine and the names on this list, but he’ll have the opportunity to ratchet it up several notches this season. It’s of paramount importance that his efficiency doesn’t see a proportional decline.

It's important to remember that these comparisons are retroactive - that is, they don't project into the future and merely cite statistical examples of like seasons. These similarity scores do a pretty nice job of finding a valuable context and it was essentially this: Denzel Valentine was a decent, role-player wing last year. Not a controversial stance, but it's worth remembering when projecting his ascent to one of State's most invaluable players this upcoming year.

Valentine was just a sophomore, and things will be radically different for him this year with the departures of Adreian Payne, Keith Appling, and Gary Harris. It's encouraging to see that his turnover rate took a sharp drop from his freshman to sophomore seasons (which suggests that he became acclimated to the speed of the college game) and his passing ability indicates an above-average Basketball IQ. Valentine is the prospective "go-to guy" for State, but there are a few potential red flags: he isn't a very good finisher and doesn't get to the line often, which means that his shooting efficiency could see a precipitous drop - especially if he has the ball in his hands a lot, which would limit catch-and-shoot three-point opportunities, which are in his wheelhouse. Going from the third- or fourth-best offensive option to the offensive catalyst with the most responsibility is incredibly difficult, and it will be on Valentine to avoid the often-customary drop in efficiency that comes with an increase in responsibility. Still, there's a lot to like about his game - namely his uncanny ability to find creative and unusual passing lanes for easy looks - but this will be a big storyline for the Spartans in the upcoming year.