With Branden Dawson's decision to stick around for his senior year and no graduate transfers headed to East Lansing, the active roster for next year's basketball team appears to be set.  The team only loses three scholarship players, but, of course, they're three pretty big players--all starters and future pros of some variety.  The 2015 season will, by Tom Izzo standards, be a rebuilding year.

If the team had been healthier this past season, the percentage of returning minutes for next season would be the fourth lowest of the Izzo era (excluding his first two years).  Of the three seasons clearly below the upcoming season in returning minutes percentage, 2012 turned out pretty good (thanks in part to a graduate transfer and a former walk-on blossoming as a senior) while 2002 and 2007 were clear rebuilding years, with the team performing not too far above NCAA tournament bubble level.

MSU does return two starters (Dawson and Denzel Valentine), two major contributors off the bench (Travis Trice and Matt Costello), and five other players who saw at least a sprinkling of PT this past season (Kenny Kaminski, Alvin Ellis, Gavin Schilling, Alex Gauna, and Russell Byrd). 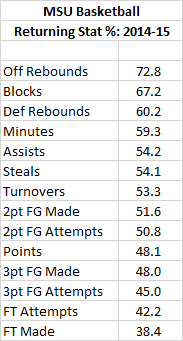 Those guys bring back the most on defense and on the glass.  Dawson and Costello will be a very effective frontline (when the team is playing small) on both those fronts.  Valentine and Trice give the team two returning offensive distributors despite the loss of the starting point guard.

The key issue the team faces is figuring out who initiates offense.  The team returns less than half its scoring.  Players who can force the issue and get to the free throw line are in particular short supply--and that's relative to an outgoing team that already struggled to get to the line regularly.

MSU doesn't return any players with a usage rate of 20% or better.  Dawson was at 19.4 and Valentine was at 18.2 this past season.  Dawson consumed more than 20% of the team's possessions in his previous two seasons, but a lot of that comes off offensive rebounds rather than self-initiated offense.  There will also, I think, be some tension between what's best for the team next year--Dawson looking to score from the low post--and what's best for Dawson's professional future--looking to take opponents off the dribble.  Regardless, Dawson's postseason performance this year (110 points, 57 rebounds, 9 assists, and 5 turnovers in 7 games) is certainly a very positive indicator going into next year.

To a large degree, this will be Denzel Valentine's team.  In a best case scenario, he becomes a poor man's Evan Turner, looking to create for others off the dribble and score some baskets off mid-range looks.  Valentine made major strides this past season--reducing his turnover percentage by over 10 percentage points and increasing his offensive rating by 13 percentage points.  (His turnover percentage of 20.6 was exactly the same as Keith Appling's as a sophomore.)  But he was much more effective in transition than in the half-court offense, struggling when he had to attack the lane late in the shot clock.

After bulking up some during a healthy offseason, Trice also made major strides this past season--boosting his offensive rating by over 20 percentage points--but is similarly more effective in transition (and shooting the three) than in attacking the basket.  Incoming freshman point guard LouRawls Nairn is a key variable on offense.  If he can attack the lane effectively off the dribble in the half-court offense, that would provide an important safety valve.

Here's my best shot at how the minutes will get divided up in competitive games (think Big Ten play) next year:

Past Valentine/Dawson/Trice, there's even more uncertainty in figuring out who plays how many minutes than usual.  Nairn, Javon Bess, and Marvin Clark should all have a shot at competing for regular minutes, but 12 scholarship players will get narrowed down to an 8- or 9-man rotation at some point.  Byrd or Gauna would need to take a Thornton-esque senior year leap to be major factors, so it may be Bess and Clark competing for the 9th spot.  Izzo will have the luxury of playing the guys who compete hardest on defense.

Ellis and Schilling are the two candidates to make a sophomore leap.  Both looked the part athletically as freshmen but struggled with decision making.  Ellis is another potential offensive initiator, but his 90.5 offensive rating (driven by a 30.4 turnover rate) as a freshman means the sophomore leap would have to be a really big one.  Kaminksi, meanwhile, can't really make a leap from an offensive rating of 137.4.  The goals for him will be to play a somewhat larger role in the offense and continue improving on defense.

Most observers have slotted the team toward bottom end of the top 25.  Dan Hanner's model has them at #23.  Hopefully, making the NCAA tournament won't be an issue, but you can't rule out a dance with the bubble until we see what the offense looks like.  In terms of the early Big Ten outlook, MSU could compete to be at the top of the big heap below Wisconsin, but there's a half dozen teams with more established scorers in position to make a run past them, too.

In some ways, the upcoming season should be more fun than this past one, without the expectations of competing for a national title hanging over the team.  This team looks a lot like the 2006-07 team on paper--stout on defense and scrappy on offense.  The question is whether Valentine can make a jump from supporting player to playmaker the way Drew Neitzel did as a junior.  (The magnitude of Neitzel's leap is probably not replicable, but Valentine starts at a higher baseline, too.)  It certainly helps that Dawson will be playing the Raymar Morgan role, rather than a younger player trying to step in as the primary front court scorer.