Finding Big Ten players with comparable statistical seasons to Matt Costello, and seeing what they tell us.

Sorry that it's been a while since I've posted for this series. Life gets busy and all that. -- Alex

Michigan State faces some massive attrition this offseason, with Keith Appling, Gary Harris, and Adreian Payne departing. Despite an underwhelming, injury-riddled final season, that core trio - bolstered by a cast of solid role players - placed the Spartans in the upper-echelon of college basketball teams last season. Each departure is significant in its own way, but the most crucial may be the graduation of Adreian Payne. When healthy, he was a dominant two-way player for State last year; Payne was ferocious on the glass, capable of altering shots near the rim, and he possessed a versatile offensive game, capable of working in the post and spotting up from three in equal measure. Payne's on his way to a successful NBA career, and he leaves Matt Costello to fill some very big shoes at the five in his wake.

In this analysis, the most statistically proximate player to Costello is Iowa's Gabriel Olaseni. Olaseni's sophomore season was less inspiring than Costello's - Costello was much more efficient on similar usage, but otherwise the two were quite similar, right down to their stellar block rates. Olaseni's minutes are hamstrung by Iowa's depth and the presence of Adam Woodbury at center (who also shows up as a comparable for Costello), and he experienced a stark improvement in offensive rebounding rate and general efficiency last year as a junior. Unlike Olaseni, Costello will probably see a huge jump in minutes, but it's certainly worth noting that they had very similar sophomore campaigns.

A junior Amir Williams is perhaps a more encouraging statistical comparison: although Williams is plagued by questions of effort and consistency, he's definitely a reasonably effective starting center in the Big Ten. His statistically anomalous sophomore season (with a FT Rate of 122.2!) checks in at #10 for Costello as well. Though sophomore Costello and junior Williams have identical shooting splits, Costello's impressive assist rate - at least for a big man - and better turnover rate make him more efficient. Before a knee injury ended Jon Horford's sophomore season, he was an excellent two-way rebounder who played an efficient brand of basketball at the offensive end. Colton Iverson's freshman year at Minnesota was adversely affected by an astronomically large turnover rate. As a sophomore for Penn State, Andrew Jones saw the most minutes of anyone on this list, but was generally unspectacular otherwise. The rest of the list - Woodbury, Andrew Ott, a freshman Ralph Sampson, and a sophomore Delvon Roe - reflects some commonality across the list: these were role bigs with varying strengths and weaknesses.

A similar theme on this list is youth: two freshmen, six sophomores and two juniors. That indicates that Matt Costello was not precocious as an underclassman - to state the obvious - but there's certainly room to improve. Most of these players saw limited minutes (like Costello) and some, not all, saw bumps in their minutes as they grew more physically mature and comfortable on the court. A few things stand out about Costello: 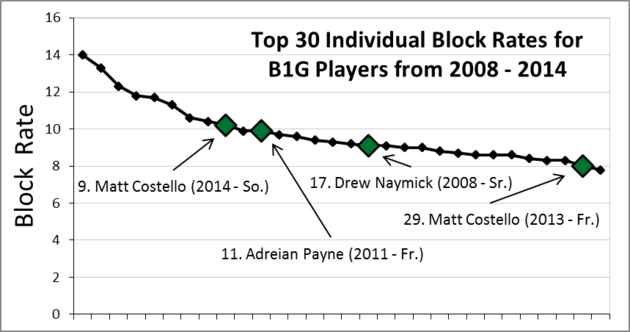 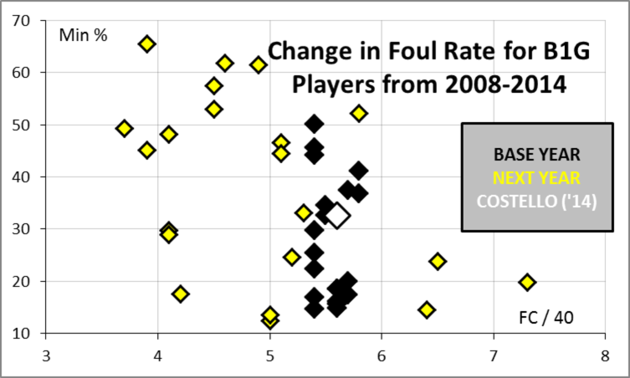 Of the players with similar foul rates, a majority improved the next season, though not many were able to stay on the floor for more than half the game (although there's no way to tease out if that was because of the general lack of ability or not). Still, Costello's foul rate should be an important note as previews of State's season come into focus: he could be quite valuable if he stays on the floor.
Alex Cook can be found on Twitter at @alexcook616. He'll probably be complaining about the Tigers bullpen for the next few months, and then tearing his hair out over Michigan's O-Line in the fall.