With the season approaching, Joe and Heck trade words about JSU

Joe Tuohey: Heck! The season is merely weeks away. Despite my waffling about even previewing this game, I dug into Jacksonville State's profile and came away surprised and maybe even a little nervous. They're the preseason favorite to win their conference. They return running back DaMarcus James (presumably the lovechild of LeBron James and DaMarcus Beasley), who set a conference record last year with 29 rushing touchdowns. Do they have a real shot at the upset here?

JT: Heck, there's one major oversight here that we haven't addressed just yet, and that is the fact that they are the Jacksonville State Gamecocks. Their mascot's name is Cocky. We need to be doing the hard-hitting analysis.

But anyways, thank you from talking me off of the cliff. I'm a football pessimist by nature. The fact that JSU doesn't bring the traditional ingredients to the typical upset recipe is reassuring. On to your question; am I concerned about the Jacksonville State rushing offense?

The answer is yes, but perhaps not for the reason you inquired about. JSU's up-tempo, run-heavy offense figures to be a good warm-up for Oregon's attack, as you mentioned. With JSU's relatively anemic passing offense, I expect to see quite a few rolled-up safeties and plenty of Kurtis Drummond in the offensive backfield. But as we've seen from Nebraska (5.7 yards per rush) and Ohio State (6.8 YPR), there are rushing gaps to be found in the MSU front, especially with two new defensive tackles. So the warm-up will be a double-edged sword, as MSU will be providing Oregon with valuable information about how we plan to defend their type of offense. That said, I'd be willing to bet Pat Narduzzi uses all of this to his advantage, as he is a warlock or something.

There are two other sobering facts I found about Jacksonville State which will help me sleep better on Thursday, August 28th. First, the OVC is not exactly the SEC of the FCS; according to Sagarin, the OVC was the third-best conference in the FCS last season. Second, JSU's quarterbacks (including former Golden Gopher Max Shortell!) had just a 13-11 TD/INT ratio last season, as well as a 127.6 cumulative passer rating. These would be poor marks in the Big Ten, playing against far superior competition. The JSU attack is one-dimensional, and that dimension is ruled by Warlock Pat Narduzzi.

HD: I'm glad you brought up the mascot thing. Let's rap about that for a second, here. I think basically everyone in 2014 can agree that the sport of cock-fighting is pretty gross. It's banned in all 50 U.S. states (though Louisiana only just got around to it in 2007), and to their credit, Alabama made it illegal about 120 years ago. So why are Jacksonville State proudly repping the gamecock, fighting rooster of choice for that particular bloodsport? Well, surely this is some long-held JSU tradition, dating long past the ban into the 1800's. Nope, they changed the mascot to the gamecock in the mid 1940's, and they changed the mascot away from the vastly superior eagle-owl. I mean, look at this cool-ass owl:

*conveniently ignores the fact that the Spartans were heavily militarized, theocratic, slave-owners*

*maybe we should all just be Eagle Owls*

JT: I'm in the minority of MSU fans that think we should have stuck with calling ourselves the Aggies. That's our school's heritage, plus it would have saved us from hearing clips from 300 constantly during game days. Losing Sparty would have been a major blow, but maybe we could have just dressed him up like Paul Bunyan: 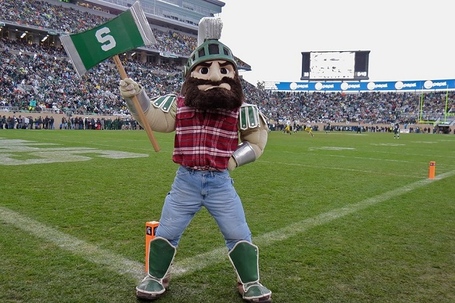 HD: Via Wikipedia: "By 1925, the school had expanded beyond agriculture, becoming Michigan State College of Agriculture and Applied Science. To reduce the emphasis on agriculture, the college held a contest to choose a new team name. The chosen entry was the "Michigan Staters." George S. Alderton, then sports editor of the Lansing State Journal, and Dale Stafford, sportswriter for the Lansing Capitol News, felt the name was too unwieldy for newspaper headlines and searched the contest entries for a better choice."

Ahaha, from the Michigan Agricultural College Aggies to the Michigan State College Staters. Hey, no one said we were trying to reduce the emphasis on dullness. Shouts to Alderton and Stafford for looking out for our #brand.

And Sparty as Paul Bunyan? I am all about arming more mascots with weaponry. That would add a whole Taken vibe every-time we lost to Michigan though, wouldn't it? "I've got a very special set of skills...".

We'll likely see an adjustment period in our secondary this year, but it's hard to imagine JSU being the passing attack to break them open. Their YPA numbers are very good (Shortell and Jenkins combined for 7.7 YPA), but they're pretty turnover-prone, and they clearly run to set up the pass (even with their high number of snaps, their 26.5 pass attempts per game would've put them 11th in the Big Ten last year).

It's a bit hard to figure out whether they're playing a Northwestern style 2-QB system or if Shortell just got overtaken by Jenkins and is now the backup (I think the second one?). Shortell averaged about a yard more per attempt and had more TDs, but also threw more picks and was the opposite of a running threat. Were I JSU, I'd put my faith in Jenkins.

Receiver Josh Barge is the clear danger man in the passing game, with 23 more catches than his nearest fellow WR and an impressive 15.3 yards a catch. Tight-end Anthony Johnson is the red-zone target with 4 TDs to lead the team. Oft absent Markis Merril chips in 15 yards a catch of his own, when healthy.

Expect a HB or WR pass. In 15 games, 7(!) non-QB players attempted at least one pass attempt, with one going for a 53 yard TD and another going for a 36 yard gain.

First off, it looks like last year's head coach Bill Clark took all the assistants except Grass with him to his new job at UAB. So that's probably not ideal for JSU (as an aside, I think this is the biggest worry about Narduzzi's inevitable (?) departure someday: does he also steal away one of Barnett or Tressel and say, Salem, along with him as his new OC/DC? Losing one coach would hurt, losing three or four would hurt much more).

JT: I wouldn't be too worried about the MSU assistants jumping ship all of a sudden - those guys will take the best job available to them and if/when Narduzzi departs, that will open up advancement opportunities internally for the rest of the staff.

Raw yardage totals sometimes are a little misleading. For instance, JSU posted 52 sacks on the season! That number is absurd; for reference, Ohio State had 42 sacks to lead the Big Ten in 2013. This means adjusting yardage totals for sacks will matter quite a bit. Sack-adjusted, JSU's run defense gave up 4.8 yards per carry, down from 4.3 YPC. That's a major tumble. On the flip side, their average yards per pass attempt drops from 5.7 YPA to 5.1 YPA.

This means the strength of the JSU defense is in the passing game, and they return some key players in that regard. Senior safety Pierre Warren returns, and he led the team with 17 passes defensed and 5 interceptions. Senior linebacker Dustin Gayton posted 8 sacks in 2013. Considering the level of competition, this will be an interesting game for Connor Cook. If Cook has progressed as has been rumored this offseason, I don't expect this to be much of a test. However, if Cook hangs out in the pocket too long or tries to do too much on the run, JSU could generate turnovers.

I'm hoping (expecting?) that MSU will be salting the game away in the second half, and at that point the running back rotation will be interesting to watch. Jeremy Langford is of course the bellcow, but I'm hoping for a little bit more rotation at that spot considering the wear-and-tear we've seen on guys like Javon Ringer and Le'Veon Bell. Delton Williams was impressive in spots last year (6.3 YPC) and I hope he's able to spell Langford more often. Langford had 292 rushing attempts last season, but I'd rather not see him in a heap before November.
Heck, I feel like I know about 20 times more about Jacksonville State than is necessary. Are you ready to give a prediction?

HD: Sure. It seems hard to remember but in Dantonio's first four years here, the MSU offense scored 42 points a game in their season openers. Can this year's Spartan team returning a host of offensive starters break out of the post-Treadwell malaise? Ehhhhh, maybe not so much. Put me down for something like... 30-13 MSU, in a sluggish, but comfortable, Friday night win. Your pick?

JT: "Sluggish but comfortable" sounds like my typical Friday night, anyways. I expect MSU to pound green pound and use the run to set up play-action. I also expect one maddening turnover offensively. On the other side, I just don't think JSU can do enough through the air to keep the safeties out of the box. MSU 33, JSU 7.