Joe and Heck tackle the most depressing opponent on the schedule

FEI Trendline (AKA the double rainbow of sadness): 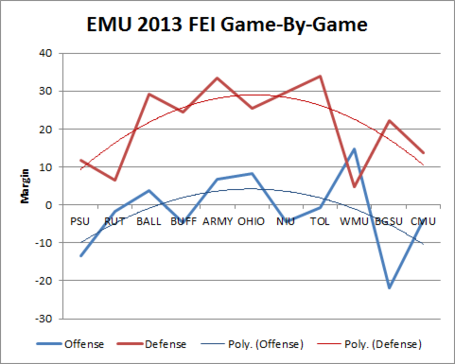 Joe Tuohey: Heck! This game is going to be one of my favorites to preview, mostly because I'm currently a part-time grad student at Eastern. There's been quite a bit of upheaval in the Eagle program since the end of last season, most of it hilarious. First, we need to talk about the Ron English rant. Seriously, if you haven't read the transcript it's totally worth it.

The best is clearly this portion: "How did so many kids go bad? I haven't been around players where so many go bad, so s***bird. I mean this is s***bird football!"

I think Eastern needed to embrace the s***bird moniker (which they sort of did by beating rival Western the same week English was fired). But why couldn't they make S***bird Football t-shirts or something? I would've bought one.

Anyways, this game is actually significantly less interesting in terms of football than the Jacksonville State game. New head coach Chris Creighton is doing a re-branding of the program, and they'll probably try to run the ball more with RB Bronson Hill. Former Penn State (by way of LSU) QB Rob Bolden could be semi-frisky as he's immediately eligible. Do you have any reason for concern?

Joe, I'm gonna be honest with you. Every time over the last few days that I've read up on Eastern Michigan football, I've stumbled across some fact or another that was so profoundly sad or pathetic that I'd just get bummed out. Their program's history for the past like, half-hundred years has just been so dang sad. They're like a slightly less depressing Northwestern basketball. Now, I don't want our readers to get bummed out, so every time I feel like I'm mentioning something that's just gonna make us all feel bad, I'm gonna to post something else that makes me happy, to lighten the mood.

Wait. Did you just imply that Rob Bolden is one of the brightest things EMU has to look forward to this year? Joe, you're getting this started with me real early, aren't you? Agh. Alright, hold on a sec.

Now, I'm glad you led off with mentioning Hill and the running game as that's something that Eastern Michigan will probably be able to do passably well. Sure, maybe they were down near the 100's nationally in running plays of 10+ or 20+ yards, but if anything, that just makes Hill's output of 5.6 yards a carry look better still. His thinner counterpart in the backfield (5'10, 188) Ryan Brumfield also hops up over the 5.1 YPC mark. And the offensive line returns four of five starters and two backups with starting experience. I'm not saying EMU is going to run the ball effectively on Michigan State, but equally bad teams as they have managed to gum their way 3 and 4 yards at a time towards avoiding complete embarrassment.

One would expect the Eagles to lean on their backfield as they attempt to win their second conference championship since nineteen fifty fiv-oh no that can't be true. *exhales breath and massages forehead* Aren't they in the MAC? I thought everybody got to win a championship every decade or so in the MAC? *looks* Ak-Akron won one! Akron! Does EMU know that? Ah geez, I just gotta-

Sing me home, Bob Ross. Sing me through this dark place.

I think Bolden's starting QB days are over and the job is in the hands of the excellently named sophomore Brogan Roback. Anything to worry about from the Eastern Michigan passing attack?

JT: Instead of embracing the s***bird thing, Eastern went a different direction: replacing their green turf with gray turf and calling Rynearson Stadium "The Factory."

The problem with this is that people tend to actually show up to a factory. In the final home game of the season, just 1,700 EMU fans managed to attend. I've been to minor league soccer matches with twice as many fans. Cue more puppy gifs!

To your question about EMU's passing game: um, no. Though Brogan Roback sports that phenomenal name and a 4-star pedigree (the only 4-star recruit in EMU history!) his QB rating was 91.3 and he completed just 42.2 percent of his attempts while starting 4 of the last 5 games for the S***birds Eagles. Roback isn't a runner, either; he had just 7 rushes for 16 yards (sack-adjusted). The Eagles do return their top two targets from last season in WR Dustin Creel and TE Tyreese Russell who had 7.8 and 7.9 yards per target, respectively. Perhaps an extra offseason for Brogan and a dash of Rob Bolden (perhaps their own WHYldcat?) should make this unit more effective.

The real issue for the S***birds Eagles, of course, is on defense. Here's a quote from Phil Steele's preview magazine that sums up the issue quite well: "Tyler Allen, due to the opp's kicking off so much after scoring, is already #2 all-time in KR yds here." Read that one more time. The special teams stats for EMU are skewed because their defense gave up so many touchdowns.

Let's put this another way. For the season, EMU gave up 3031 yards on 312 passing attempts. That is good for 9.7 yards per attempt! I mean, EMU basically gives up a first down every time their opponent dropped back to pass.

However, instead of throwing the ball all over the S***birds Eagles, opponents elected to run the the ball 493 times compared to 312 passing attempts. Why? Because Eastern gave up 6.3 yards per carry (and this is not sack-adjusted). When it takes only two rushing attempts to get a first down (and then some), it doesn't make sense to do something semi-risky like throw the ball.

The only hope is that new coach Chris Creighton manages to improve things dramatically, overnight. Think the former Drake coach can manage that?

Creighton had a handful of nice to very nice seasons at the FCS and D-III levels of football (three 11+ win seasons in seven years at D-III Wabash. Four 8+ win seasons in 6 years at FCS Drake, with no under .500 seasons), so EMU is getting a proven program builder, likely to be a better strategy than their typical move of hiring whatever assistant was willing to leave the University of Michigan, Notre Dame, or Michigan State that season.

But Eastern Michigan is less a graveyard of coaches, which implies a respectful exit, and more a sharpened stick that they jam coaches' heads onto after the job lops it off. Three of Eastern Michigan's seven head coaches since 1978 never got another shot at a head coaching job after they were fired, another two head coaches were EMU'd out of the profession of college football coaching entirely. Only Ron Cooper was able to parlay EMU into another HC job, at Louisville, where he lasted three years before also being relegated to assistant duties for the rest of his career.

By the way, the average coach in the past three and a half decades at EMU has gotten 5 years on the job, with the average win-loss record of 3-7 each season. Nobody has cracked a 42% winning percentage during their tenure.

Ah, that hurt in my heart is coming back. Here, let's check this out:

That's a pretty cool sneaker Nike's putting out there. Don't think about the historical futility of Eastern Michigan football. Think for a second about how MSU football is in a place where Nike's pushing it as a flagship athletic program, and how that nets us cool stuff like this. I think one can accept that those bronze accents are both a ruthless marketing machination while also acknowledging they look pretty darn sexy next to that dark spartan green. To paraphrase Vincent Vega, I don't know if those are worth $120, but they're pretty darn sexy.

Okay, so can Coach Creighton reverse the trend with the Eagles? History would seem to say no. We're talking about a program that had just 1,751 people attending its final home-game last year, and where editorials are asking, with the sort of gentle, insistent, prodding of trying to get someone to quit smoking, whether they should just drop down to the FCS division.

JT: Yeah, so I have a terrible confession to make. I actually considered buying EMU season tickets this year. For $150, you get two tickets in the front row on the 50 yard line. Not only that, they throw in a free pair of tickets to any road MAC game. I decided not to buy these tickets when a friend of mine asked simply, "why?"

I guess I understand the low attendance.

There are some within the EMU community that guess Creighton is the last hope for FBS football at Eastern. If attendance doesn't rise above an FBS-worst 13.4% of capacity, it just doesn't seem sustainable for the program. The only way Eastern football continues at the FBS level is if they do something like travel to multiple major programs who are trying not to schedule FCS teams. And actually, they're doing just that.

Anyways, this went from normal depressing to Game of Thrones-level depressing. I think it's time to make a prediction before I lose my head.

This is definitely the least talented team on the slate for MSU and it comes at a good time on the schedule. The Eagles won't be able to throw the ball against the Narduzzi quarters scheme. Pretty much anything Dave Warner draws up will gain infinity yards. I'm thinking something along the lines of MSU 52-EMU 10. 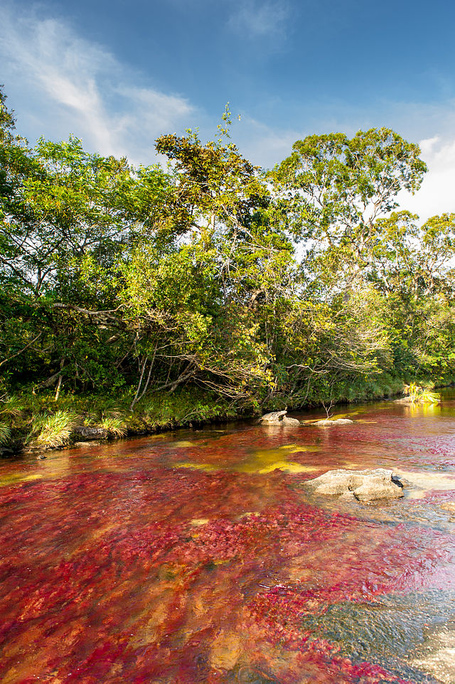 Look at this cool river. Rivers aren't supposed to be purple and pink and orange, but this one is. It's like no one told the Caño Cristales that it was only supposed to be a muddy brown, or at best maybe a blue or a green. Don't think about how one out of every seven seats at EMU's stadium are full on game days. Instead, reflect on the marvels of the natural world and what they can teach us about ourselves. Maybe EMU football can embrace the spirit of this river: that unexpected beauty and awe can come from something of which only dull conformity is expected. Perhaps the new staff can inject a blast of vivid color into the gray-scale program that is Eastern Michigan-
Wait. What color did they paint their field turf again?