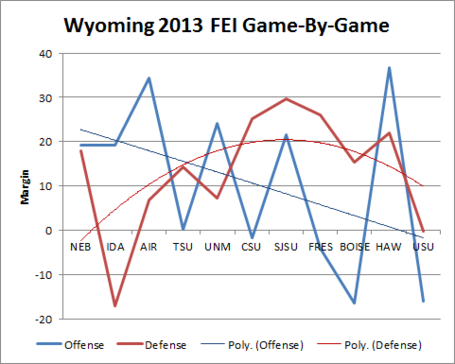 Joe Tuohey: Heck, this is a weird game to have on the schedule. It's relatively rare for MSU to have a non-FCS, non-directional, non-interesting non-conference game. The last I can remember was that home-neutral-home series with Florida Atlantic, and UAB in 2007. The most interesting part of this game is that it is Homecoming.

This has the makings for a closer game than expected, I think. Wyoming held it close with Nebraska in Week 1 last year, and this game comes just a week before MSU takes on Nebraska in the B1G opener. This is obviously way too early and we'll know a little bit more about Wyoming by late September. That said, how much does Bohl scare you?

Heck Dorland: Craig Bohl is an ass-kicker of the highest order. That he could only get the Wyoming job after three seasons of Sabanian success at NDSU seems very strange. Let me put it this way, if I was like, Purdue, or Illinois, or Rutgers, and knew that the coaching cycle's hot candidates weren't coming my way, instead of hiring whatever MAC coach managed to scrabble together 11 wins for the first time in his career that year, I would go find the very best coach in FCS and give him like, a nice mid-range, three year contract. That dude in the past two cycles has been Craig Bohl.

You go get an FCS guy and bring him to your bottom of the conference BCS team, and first off your resources are probably going to entice him no matter how successful he was. He's going to get paid better, his recruiting budget will be bigger, his facilities are going to be better, he's going to have more scholarships to give out. Basically, your job is going to feel like a huge upgrade, even if you're the worst team in your conference. And secondly, you're getting a guy who knows how to build a winning football team. It's not like the rules are different at the FCS and FBS levels. If a dude wins 43 out of 45 games at the FCS level, he's probably going to be a pretty good coach at the FBS level as well. Jim Tressell and Paul Johnson, former FCS national championship coaches have each worked out pretty well. And Mike London is recruiting well, if not winning many games yet, at Virginia. Why don't more teams give this a shot?

I don't know, maybe Bohl is just a lousy interview.

But let's look at his team more in-depth. How much credit should we give them for hanging tough with a random number generating Nebraska squad, when they also lost by 3 or more touchdowns to Texas State, Colorado State, Fresno State, Boise State, and Utah State. Is there any reason to think they can threaten Michigan State?
(Yes, there is. The reason is named Craig Bohl. Once a mountain range told Craig Bohl to just try and move them and, well, they don't call 'em the Great Plains now for nothing.)

JT: I think your points about hiring an FCS head coach instead of an FBS coordinator are good ones. I will add that a coordinator's job and a head coach's job probably require different skill sets. Do you hear that, Pat Narduzzi suitors?!

Pretty much the entire case for Wyoming making this game close rests upon the shoulders of Bohl, because the returning talent isn't all that special. The Cowboys lose star QB Brett Smith to the CFL, to be replaced by Danish Existentialist QB Colby Kierkegaard. Kierkegaard will be philosophically influencing throwing the ball to three of the top four receivers from Wyoming's 2013 squad, and RB Shaun Wick secured 5.9 yards per carry on the ground (but didn't break 1000 yards for the season). The Cowboys do need to replace three starters along the offensive line. None of these guys scare me, and there's potential for a major drop-off in quarterback play.

Unlike the other opponents we've previewed so far, I think we'll know quite a bit more about this Wyoming squad by the time this game comes around. They play Oregon one week after MSU does, because apparently the Cowboys are gluttons for punishment and/or paydays.

Wyoming does have an unfortunately named cornerback named Blair Burns. Do you think Connor Cook can make him live up to his name?

HD: Likely so. Wyoming's pass rush last year was lethargic, and though they return six of their nine sack producers, but those six returning players combined for just 15.5 sacks last year, nothing to worry about from MSU's perspective. Furthermore, their secondary returns a nearly toothless 7 out of 9 interceptions (2 went for TDs though!). This added up to a secondary that let opposing quarterbacks to complete a crazy ~68.9% of their passes, the second worst mark in college football last year, for 7.9 yards an attempt, and 2.7 passing TDs a game.

Was this paper thin passing D propped up by a salty run defense? Hardly. The Cowboys let teams run for 4.64 yards per carry, a very bad number, but only 94th nationally. However, they let teams run the ball 47.5 times per game, ahead of only Hawaii and Air Force and cash in 27 touchdowns. Their top linebackers return, and a healthy amount of the team's TFLs return with them, but it's worth wondering whether that's entirely a good thing in the wake of last year's production.

Bohl is a defensive guy by trade, but getting this unit up to average would have to be considered a huge accomplishment. More than likely this is a multi-year rebuild job.

JT: That's what Jedi Master Craig Bohl wants you to think, Heck. These are not the recruits you are looking for.

Here's one rationale for an improved Wyoming squad: based upon the FEI trendline, this is a team that regressed over the course of the 2013 season. The Cowboys likely knew the previous coach was on the way out. They return 16 starters on Offense and Defense, as well as both specialists. This is the fifth game of the season, and one of the previous games will have been against Oregon; this Wyoming team will know the new system pretty well.

I still don't think it's enough. This Wyoming defense puts up a slightly better fight than Eastern: MSU 42, Wyoming 13.

(Oh no. We're going to get 'punt-sixed' as time runs out, aren't we? If CMU 2009 taught me anything, it's that the most Dantonio way to get upset is through horrifying special teams miscues)