Joe and Heck take a look at Nebraska. 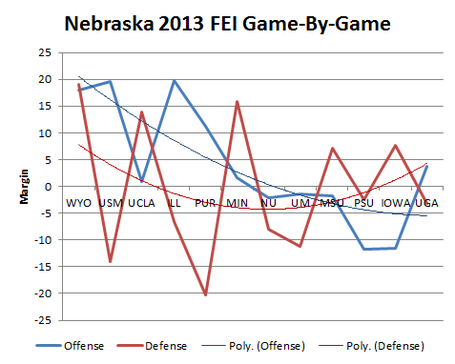 Joe Tuohey: Finally, we're into the Big Ten season, and we start off with a doozy: the Fightin' Faux Pelinis!

Nebraska is definitely caught up in a weird expectations typhoon. They're consistently good but not great, and that is enough to make normally extremely polite Nebraska fans merely gregarious.

From the FEI trendline I think it's pretty obvious that Nebraska was fortunate to get to that 9-4 level again last year. They needed squeakers against Wyoming, Northwestern, Michigan, Penn State, and Georgia to get to that level. Their record in close games was a perfect 5-0. If they have an average 2-2 record in close games last year before the bowl game, they'd be 6-6 going into bowl season and Bo Pelini would no longer be coaching in Lincoln. Actually, a good comparison for the 2013 Huskers would probably be the 2008 MSU team which went 2-1 in close games and had a pretty favorable schedule. The difference, of course, were the expectations heading into the season.

Another interesting item is that the 2013 Nebraska offense dropped in effectiveness at a near-linear rate. Once the meat of the Big Ten schedule hit, the Nebraska offense only generated positive value against Minnesota.

That's a little scary for them. While they return some nice skill position pieces in the crazy dangerous RB Ameer Abdullah (5.6 YPC vs. MSU in 2013) and a pretty decent stable of receivers, they have no proven quarterback and need to replace four starters along the offensive line.

Could the Nebraska offense actually be worse than it was in 2013?

Heck Dorland: It's possible, but I'm actually going to 'buy' on the Nebraska offense a bit. I'll say first off, that I think Spartan fan's opinions of Tommy Armstrong are clouded by intently having watched him disasterously turn the ball over three times in Nebraska's loss to MSU last year. He was just a freshman, put up decent YPA numbers (7.4) despite a bad completion percentage, and showed a little something in the run game as well. It's possibly you could see some nice strides out of him, especially when in the worst case he can just hand the ball off to Ameer Abdullah, who might the Big Ten's best back.

I've also been impressed with how their offensive coordinator has matched wits with MSU's defense the last two years. Losing four offensive linemen is indeed worrisome, but they had some really terrible injury luck along the offensive line last year (well, all over the place really) and I think having more cohesion could lead to a sizable rebound even if the names aren't the same.

Mostly, I'm just going to enjoy watching Bo Pelini, who ran all out of give-a-damns about two weeks into last season, yet somehow maintains his job and seems to be using that precarious, but extent job security to do literally whatever the hell he wants. Carl Pelini is suddenly the second most interesting Pelini and Carl Pelini allegedly got fired for yayo. Bo is basically Ron Livingston in the second act of Office Space right now, taking the AD's parking space, removing annoying door handles from the practice facility, and letting his cat do its business in the Memorial Stadium end zones. This is going to be fun.

Did three of Nebraska's defensive starters get knocked out in a single press release because Bo, I don't know, decided Fridays are now Knife-Fighting Day during Fall Camp? I'm just saying, we can't say conclusively that that didn't happen.

JT: The Pelini family has entered what Bill Simmons would call the "Tyson Zone." That is the zone where basically anything you could tell me about the Pelini family I will immediately accept without protest. Carl Pelini was seen throwing feces at monkeys in a zoo? No question. Bo Pelini had a Knife-Fighting day at practice? Sure. [Note: these things probably didn't happen]

I think we've totally glossed over the most important match-up of this game, which is definitely Fake Bo Pelini (@FauxPelini) vs. Mike Sadler (@Sadler_3). They have had quite a history of Twitter confrontation. We can only assume this will determine the outcome of this game. I think there are some obviously scientific ways to evaluate this showdown:

So there you have it.

In terms of actual football analysis, Nebraska's defense couldn't be more random. They performed poorly (gave up at least 5 points of value in terms of FEI) against Wyoming, UCLA, Minnesota, MSU, and Iowa. These were not fearsome offenses, except maybe UCLA. Nebraska's defense is more experienced than a year ago, as they return 6 starters instead of the 4 they returned between 2012 and 2013. Returning 4 starters probably explains the roller coaster of the 2013 season. Perhaps they'll be more consistent in 2014.

Even if they're more consistent in 2014, though, I'm confident that the MSU attack will be able to generate quite a few points against this Nebraska defense because outside of Randy Gregory, there isn't much to be scared about. Nebraska lost the other 3 defensive line starters besides Gregory, and also 3 of 4 starters in the secondary. I think Connor Cook and Tony Lippett hook up for two scores.

So, did we just sort of predict a track meet? You might be right in guessing that the offense will improve with additional experience for Armstrong.

"I'm confident that the MSU attack will be able to generate quite a few points against this Nebraska defense because outside of Randy Gregory, there isn't much to be scared about."

RANDY GREGORY, THO. I know he only got credited with 1 TFL in the game vs MSU last year, but he was applying a ton of pressure. A secondary can start looking awfully good if a quarterback is repeatedly put under pressure and Gregory might be the nation's best DE. Before that string of defensive injuries, I would've probably bought stock on the Nebraska defense as well. Now, it looks a good deal less solid, and I agree that MSU can probably have a nice day on offense.

I think a higher scoring game is likely on tap. Nebraska's scored 24-28 points in all three of their past meetings with MSU, while the Spartans scored 3 in one of the more bizarre offensive performances of the Kirk Cousins era, then jumped to 24 to 41 in the last two years.

The uh, controversial, finish of 2012's MSU-Neb game was mostly swept under the rug in the midst of general discontent and the sting of repeated close losses that year, but I thought Nebraska could be set to deliver the Spartans another stinging home loss this year right up until they lost those three starters in their back seven before the season kicked off. I reserve the right to upgrade to a rosier Husker outlook on what I think is still a promising team out West, but put me down for a 31-27 MSU win.

JT: I'll be honest - Nebraska terrifies me, because I can't wrap my head around either the 2011 or 2012 games. The 2011 game was the beginning of the end for Dan Roushar, methinks. The offensive frustration that began in that game was fully realized throughout 2012. The end of the 2012 game was horrifying. I really don't want to talk about it. The 2013 game was then handed to MSU on a silver platter with 5 Nebraska turnovers. Very weird.

If you've been paying attention, I just said that I don't think Nebraska's offense or defense will be much good, yet somehow I'm still terrified of them as a team. I think inexplicable things tend to happen in this game.

(I literally used a random number generator. I kind of like how it turned out, actually.)