Joe and Heck check out the Boilermakers. 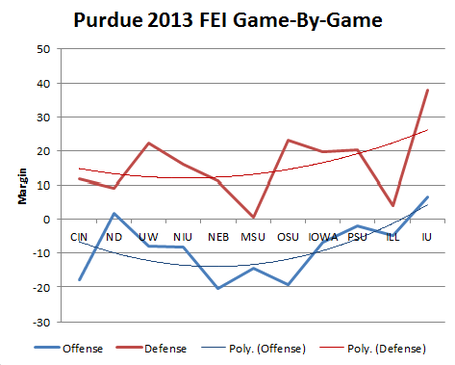 Joe Tuohey: So, uh, yeah. Wow. This can't be more depressing than the Eastern Michigan preview can it?

One thing you can say about the 2013 Purdue team was that at least the offense showed improvement. After scoring a total of seven (!) points combined against Nebraska, OSU and MSU, Purdue averaged nearly 22 points per game in their final four games. That's at least less embarrassing.

The other thing is that Purdue's schedule wasn't very friendly in the non-conference in 2013. Cincinnati, Notre Dame, and Northern Illinois form quite the trio - especially when you consider that NIU was 12-0 at one point last season. That will change in 2014, with Purdue leading off against both Western and Central Michigan, and also having an FCS cupcake. There should be at least 3 wins here, and you have to figure that they get a Big Ten win somewhere, right? Yikes.

I did a little Q&A with Travis Miller at Hammer and Rails a little while ago. One thing I couldn't figure out: why have recent games against Purdue been so close? I'm thinking of the 2010 game in particular, although 2013 and 2009 also definitely qualify. Any ideas?

Heck Dorland: Well, I mean, 'close' is a relative term. Dantonio is 5-0 against Purdue, with wins by 3, 4, 14, 14, and 17 points. That 35-31 game in 2010 was nearly a core meltdown. Down 28-13 to a 4-7 Purdue team at home, could you imagine if that was how the Big Ten Title slipped away? People reference the ugly end to the PSU game a week later, but sheesh, we needed twenty-two 4th quarter points to avoid a realllly embarrassing loss there. The three point win in 2009 was two mediocre teams trading leads, until MSU had the good fortune to kick the last field goal through the uprights. The other three games were never really in doubt throughout the 4th quarter.

But more generally, Purdue is usually an okay team, there's no shame in the typical two touchdown win over Purdue. They made back to back bowls as recently as 2011 and 2012. Tiller was a tough out from the late 90's to the late 2000's. The Boilermakers have a reasonably proud tradition of bowl eligibility in the last two decades which is more than some Big Ten programs can say.

So what happened last year? It seems like new coach Darrell Hazell got stuck with a real turd sandwich by departing coach Danny Hope, and the team simply lacked well, anyone, who had game-changing talent. So Hazell did what fans always scream for coaches to do when the season starts going wrong: he benched the old guys and played the young guys (at least on offense). And it didn't do anything to help, last year at least. But those young guys are now slightly older guys, and while Etling, Yancy, and Hunt isn't the law firm you'd want to hire to represent you in football court, they're the one Purdue's going to make do with.

Quarterback Danny Etling had a painful first year, but ended it on a strong note, smashing (I know, I know) Indiana, to the tune of 485 yards and 4 TDs. It was also the first time Purdue had committed to a QB and stuck with him for seemingly ages, and the knowledge that 'this is the guy' can't hurt.

Purdue's offense could be merely 'pretty bad' next year instead of 'terrible'. And that's good news, because I think their defense is going to be just awful. Any argument there?

JT: I was actually at the 2011 Little Caesar's Pizza Bowl between Purdue and Western Michigan. It was quite entertaining.

Anyways, your point about Purdue being a respectable program is a good one. Hazell's first year came at a bad time, obviously. But I don't think that Purdue can get themselves out of the basement this year. And that has less to do with Purdue, which is a team that should improve because it can't get any worse. It has more to do with the depth of the Big Ten.

I don't want to get all ESS-EEE-SEE on you, but the Big Ten is really, really deep. I think there are 11 teams which should probably expect to get to a bowl game this year, which includes everyone other than Rutgers, Illinois and Purdue. Yes, I included Indiana in that group, because their offense was Top-20 in F/+ last year, and they probably need to be simply not horrific defensively to be very frisky.

Again I digress. Look at Purdue's B1G schedule: Iowa, @Illinois, MSU, at Minnesota, at Nebraska, Wisconsin, Northwestern, at Indiana. Where do the wins come from? You could argue Illinois, but that's a road game. The average score of Purdue B1G games last year was 39-13. They finished 114 out of 125 FBS schools in F/+. This is a really big hole to climb out of.

And you're right, the defense is not carrying Purdue out of that hole. The three returning starters in the secondary had a total of eight pass break ups last year. Six of the ten sacks contributed by the defensive line return. There's a little talent in former 4-star recruits LB Gelen Robinson and DT Ryan Watson, at least. The hope has to be addition by subtraction.

How does a program drop off a cliff so violently? Could we properly describe 2014 as a "dead cat bounce" year for Purdue with an easier non-con schedule?

HD: Well, the Boilermakers had the misfortune of drawing an eventual 9-4 Cincinnati team and an eventual 12-2 Northern Illinois team in the non-con roulette wheel last year. This year's home games against Western Michigan, Central Michigan, and Southern Illinois should be at least two wins or Hazell might not make it to year three. So I think Purdue can definitely do better than last year in the win loss column, if only because one win is nearly as low of a bar as you can get.

As far as finding victories in the Big Ten, listen, Purdue is in the West. Let's not pretend like Purdue couldn't find two wins among the group of Minnesota, Northwestern, Illinois, and Indiana without needing to play at a particularly high level.

Really brutal Big Ten teams like last year's Purdue are actually pretty rare. So I think a jump back to 3-9, 4-8, something like that is probably in Purdue's cards this year. Now, is that 'improvement' going to come because the team is any better, or just because the schedule is easier? That's going to be the question.

I also don't see Purdue as a bowl team. Year three is usually when rebuild jobs start to show results, I wouldn't expect too much out of year two.

Score predictions? Put me down for 38-9 Michigan State.

JT: I don't know, man. I really like all three of Minnesota, Northwestern, and Indiana. None of those teams are overwhelming, but I think they're all bowl-bound. Still, you're right, an upset or two could happen in that group of games for Purdue.

At least Purdue will have alcohol sales! That's, uh, something! The greatest irony is that they're only selling beer and wine, making it impossible to drink an actual Boilermaker. That's just poor planning.

I predict a closer-than-expected-but-still-not-very-close victory for MSU, 24-10.