It's great for the season to be back, isn't it? (Big box score) 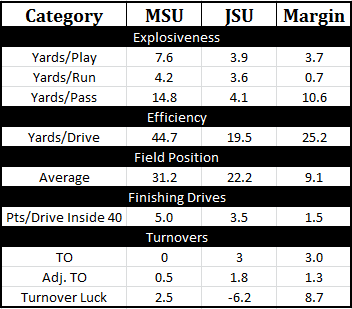 [Some notes: these data are sack-adjusted. For this game I decided to include the final drive for yardage calculations but not for finishing drives. It just seemed right, as MSU was trying to move the ball, but not finish the drive. In the future, kneeldowns at the end of games won't be included.]

I'm going to do these Monday posts a little differently than KJ has done in the past; I'm going to use Bill Connelly's Five Factors. The idea behind the Five Factors is to get a complete picture of a football game, similar to the Four Factors in basketball. For this first edition, let's go factor-by-factor:

The first and probably the most important factor. Breaking big plays simultaneously improves the distance to the goal line dramatically while also eliminating chances for an offense to make mistakes.

We're going to use a relatively simple estimation here in terms of yards per play, broken down into sack-adjusted rushing and passing averages. Yards per play isn't perfect, as it doesn't tell us the exact distribution of the gains. But it does a much better job than looking at yardage totals, which don't take tempo into account.

As for this game, that 7.6 yards per play average for MSU is stellar. There was just one game in 2013 where the MSU offense posted a better number, which was a 7.7 YPP at Northwestern. The passing game was significantly more explosive than in any game in 2013; the closest was again 11.4 YPA at Northwestern. I'm thoroughly encouraged.

I assume some loyal MSU fan sold their soul for Connor Cook's intact knee. Thank you, whoever you are.

The running game figure looks a little concerning, but consider that the average was torched by Delton Williams (0.6 YPC on 5 carries) and Gerald Holmes (3.5 YPC on 8 carries) in garbage time. This probably says something about the offensive line depth.

Defensively, giving up 3.9 yards per play to a team which averaged 35 points per game in 2013 and returned 9 offensive starters is also pretty good. Yes, yes, I know this is an FCS team. But this was a complete performance.

Here's where the downside of the Yards Per Play measure comes in. Because we don't know what the distribution of yards gained looks like, it helps to know if that team was able to sustain their drives. In an extreme example, consider a hypothetical team with drives of 99 yards on 3 plays, 0 yards on 3 plays, and 0 yards on 3 plays. This team would appear very explosive (11 yards per play!) but would not be very efficient. For this analysis we'll use yards per drive, which is a good estimator of a team's ability to maintain possession and be consistently effective.

Other than the first broken play, the defense didn't give up a drive of more than 20 yards until the second half. This included 4 three-and-outs. Again, very efficient.

This is pretty self-explanatory, but the importance of this category is often understated. Teams which have an average field position advantage of between 6 and 10 yards (like MSU's 9.1 advantage in this game) win 78% of the time with an average scoring margin of 16 points, all other things being equal. Though Mike Sadler's Heisman campaign got off to a rough start with an average of just 32.8 yards per punt, both he and kickoff specialist Kevin Cronin did a great job of giving MSU a field position advantage.

Per Brian Fremeau, MSU was top-5 in the nation in 2013 in terms of field position advantage. This should continue to be a major strength.

If the 2012 MSU season taught me anything, it was that liquor is my friend finishing a drive is a mysterious, frustrating, and extremely important endeavor. The lack of drive-finishing ability in 2012 is what made Dan Conroy a scapegoat (unfairly).

The difference of 1.5 points per scoring opportunity is a rock-solid number: teams with this margin win 75% of these games with an average margin of 12 points. Good work on both ends.

Turnovers are definitely the most random of any of these categories. Teams tend to recover 50% of fumbles and intercept about 22% of passes defensed.

Since turnovers are worth 5 points of margin on average, we can estimate just how many points a team gained or lost due to luck; in this game, MSU gained a total of 8.7 points in margin due to turnover luck. Still, MSU created more opportunities for turnovers than JSU, which is sort of a prerequisite. Again well done.

This was a particularly complete performance, especially from the starters in the first half. The style of this Jacksonville State offense had previously given MSU's defense some serious trouble, and the 2014 MSU outfit was clearly up to the task. This makes me wonder: does the 2014 MSU defense have a higher ceiling than the 2012 or 2013 units? Though there is some youth along the defensive line and a few guys adjusting to new roles among the back seven, it seems that the overall athleticism has improved. That'll certainly be tested this week.

Offensively, let's hope the AMSUOLHG has been appeased with the offerings of Connor Kruse and Travis Jackson. Brian Allen seems competent but starting a true freshmen offensive lineman in Autzen is dubious at best. The three-headed monster of Cook, Lippett, and Langford seem like they'll be limited only by that offensive line. That is not something I expected to be saying about a year ago.