Surveying the wreckage rest of the schedule

I hope your bye week was relaxing. I spent mine trolling tailgates in Ann Arbor: 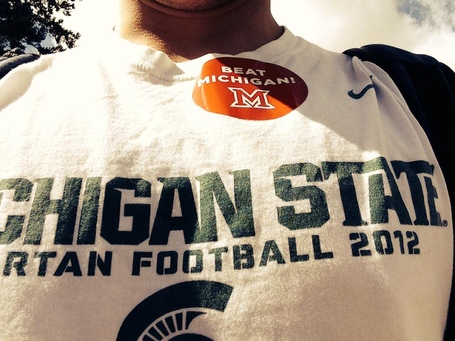 Anyways, I thought this would be a great chance to take a look at the MSU schedule. I plan on doing the same later in the season, when we know a little bit more about every team. The "Proj MSU Win %" category is the percentage chance Massey gives MSU to beat the given opponent.

Teams That Are Probably Actually Good

I considered placing Oregon into a separate category; there's a big drop-off from Oregon to Ohio State. That 87th rated strength of schedule isn't very impressive, especially considering that MSU is 8th in the Sagarin ratings. The 5.5 defensive yards per play is interesting as only Eastern Michigan and Rutgers have given up more yardage on a per-play basis. Still, Oregon's offense is clearly overwhelming and I can't imagine that any of the other opponents will look better than Oregon by the end of the year.

Ohio State is going to be just fine. Their margin of +2.3 yards per play against a decent schedule is very respectable and the youth issue will ebb as the season goes along. The fact that Virginia Tech lost at home to East Carolina looks bad, but that East Carolina team ranks 51st in the Sagarin and looks legitimately feisty. The Massey Ratings give MSU a 65% chance to beat tOSU at home on November 8th, and that sounds about right to me.

We really don't know that much about the Cornhuskers because they haven't played anybody just yet. That escape at home against McNeese State looks bad, but the blowout on the road against Fresno State counteracts that somewhat. The game against "The U" this week will give us significantly more information about this team which is destined to lose 4 games somehow.

Look, we reached peak #B1G with the Christian Hackenberg 7-yard pooch punt with 5:30 left in the 4th quarter down 10-6. to Rutgers. The fact that Penn State ended up winning the game is even more #B1G. Still, Penn State's defense has been surprisingly competent and they've got the best win among the Big Ten (the win over UCF in Week 1). The lift of the sanctions also gives Penn State something to play for now and I'm legitimately concerned about the battle for the Land Grant trophy at the end of the year.

Michigan has been pretty good against two really bad teams, and then totally imploded on the road in South Bend. Massey has their upcoming game against Utah as a virtual toss-up (UM at 51% to win) this coming weekend. If Michigan doesn't pull this one out, the season could start to spiral on them.

Indiana hasn't been very good despite not having a difficult schedule, but I can't write them off because that offense was just so good last year. It says something about the current state of the Big Ten that the loss on the road against Bowling Green wasn't totally unexpected or embarrassing. That said, if the game at Missouri on Saturday is a bloodbath then I will be downgrading Indiana to "dumpster fire" status.

Another team close to "dumpster fire" status. Maryland draws Iowa and Wisconsin (in Madison) from the West division which seriously hurts their bowl chances. Does anyone else feel sorry for Stefon Diggs? As a friend of mine put it, C.J. Brown isn't a passing quarterback (6.4 yards per attempt, non-sack adjusted). He's also not always a running quarterback. Which leaves, well, not much.

There's nothing quite like losing to a team that flawlessly executed a 7-yard pooch punt late in the fourth quarter while down a score. Sagarin doesn't think much of Washington State (71st) or Howard (208!). They draw Nebraska and Wisconsin from the West, and they could very easily lose to Navy this week. I'm glad it didn't take them long to get to this status.

The good news: Purdue kept it closer with Notre Dame, as expected. The bad news: "keeping it closer" meant losing by 16 points. You have to figure they beat Southern Illinois and find a win or two in conference. That's the best case.

Wyoming eked out wins at home over FCS Montana and Air Force before getting beat down by Oregon in Eugene. Interestingly, philosopher-quarterback Colby Kierkegaard averaged 8.6 yards per attempt versus Oregon, while RB Shaun Wick gathered 7.6 yards per carry. This is a little bit concerning, considering those figures beat Connor Cook and Jeremy Langford's averages. But you have to figure a significant number of those attempts came against the second-team Oregon defense once the rout was on.

Somehow, Jacksonville State required overtime to beat Chattanooga in their second game despite outgaining them in yardage 409-111. I'll be honest, I don't know what this means, exactly. But they're still #8 in the FCS polls and they're definitely not as bad as the following team.