Is this analysis even necessary? 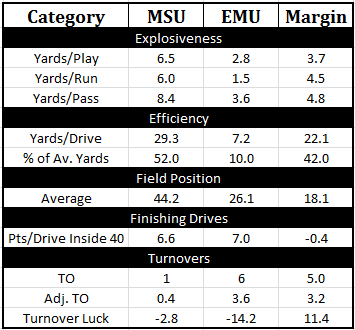 For the observant, I've added a metric in the "Efficiency" category that I think will be useful: percentage of available yards gained. I'd been kicking this idea round in my head, but it seemed to be especially pertinent in this game. For instance, MSU had touchdown drives of 23, 7, and 6 yards in the first half. Clearly, those drives were efficient, but this was not captured by the yards per drive figure (though they were captured by Field Position and Finishing Drives).

Anyways, the basic idea is this: of the available yards on a drive, how many of them were obtained by the offense? In the case of those three short TD drives, MSU got 100% of the available yards. On a hypothetical drive starting at the MSU 20, a drive of 40 yards and a punt would yield 50% of the yards available. I think this is a good way of measuring drive efficiency while decoupling it from field position.

For reference, here's how this figure looked over the 2013 season and what we've got so far in 2014: 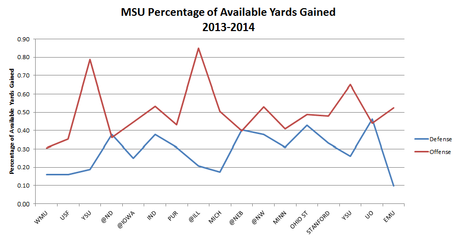 Based on the above chart, I'm pretty sure this metric works in measuring efficiency. Games against Notre Dame '13, Nebraska '13, and Oregon '14 were decided by some combination of drive finishing ability and/or turnovers. You can also see just how dominant this performance was defensively; even better than the WMU and USF games from 2013.

This is all burying the lede a bit. MSU gained more yards per pass than EMU gained per drive. That's unprecedented. In the last two years, the previous low was 11.6 yards per drive allowed against South Florida in 2013. The only possible nitpick you could have is that EMU was pretty good at finishing drives, but those scores happened way after the outcome was determined.

It was painful to watch, at times. I wanted Eastern to just run the ball and eat clock, which they refused to do. Their longest drive in terms of time of possession was 2 minutes and 24 seconds long. This resulted in 18 drives for EMU and 19 drives (17 not counting kneel-downs) for MSU. Since the beginning of 2012, MSU's previous high was 15 drives in a game. The offense couldn't help but score; Eastern forced the hand of Dantonio.

I understand Wisconsin a little better now. They've been vilified for running up the score against bad teams, but when your third-string running back takes a run up the gut 80 yards, it's not your fault. That score of 73 is so gaudy that it could help perception, but it seems like the Big Ten being more competitive nationally this week will be much more important.

The offense got back to the jet-sweep package that it had sort of abandoned against Oregon, as receivers had six carries early. It's clear they're looking to get the ball into the hands of the speedsters going towards the edge, and I'd highly recommend reading Space Coyote's write-up on the package here. This seemed like an R.J. Shelton-specific package last year (he had 7.3 YPC), but it makes sense to me to involve guys like Keith Mumphery and Macgarrett Kings in those plays as well. Don't forget that Tony Lippett was a QB in high school; I see a WR pass play in the future, a la 2013 Purdue. I'm glad this package hasn't been forgotten while the WHYldcat seems to be a distant memory.

And the offensive coaching staff should be the main takeaway from this game. There was a lot made about the 2012 near-debacle against Eastern, and the strange butterfly effects it may have created. I remember that game because it was when my hope for the offense was crushed. That hope is no longer a pipe dream, as the offense is like, actually really good now. What a difference two years makes.