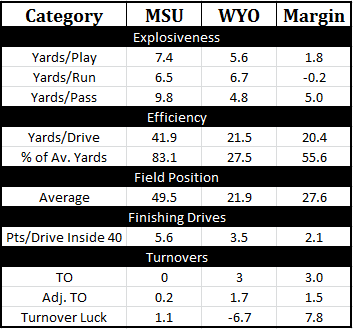 [Some notes: these data are sack-adjusted. For more information about the Five Factors check out Bill Connelly's explanation here.]

This was a nearly flawless game offensively, as gaining 83.1% of the total available yards is absurd. This included a literally flawless first half performance, where MSU gained 100% of available yards until the kneeldown to end the half. The offense continues to improve and it is sort of baffling. I'm not sure this unit has a ceiling.

A couple weeks ago we got a question in the mailbag about the running game. I'm going to copy it here:

Should we be concerned about the lackluster run game? Or is it similar to last year and we wait until the offensive line gels? -Dave Taylor

We have a little better data to answer this question now. I prepared a little chart to show the week over week improvement in the run game: 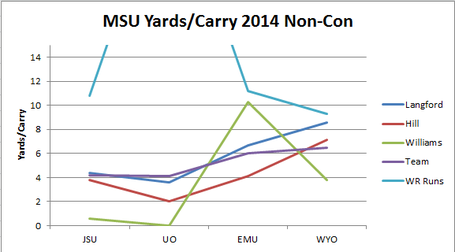 I decided to combine all WR runs together for simplicity and to give some additional data. There was just one WR run in the Oregon game which went for 30 yards, which is why that point isn't visible. Also, Delton Williams had no carries against Oregon.

It's pretty clear that the running game has improved week-over-week. Jeremy Langford in particular has shown marked progress which is encouraging. If there was an issue with the offensive line gelling, I believe it has likely been solved.

The efficiency of the jet sweep package is also notable. This efficiency declined against Wyoming, where there were 7 runs by receivers, the most in a game this season. I'm not sure if this is a one-game trend or if this will persist into the Big Ten slate, but I like that the package is being used more to attack the edges and I hope this has caused some additional room for the running backs.

The glaring concern from this game is the rush defense. MSU only gave up more than 6.7 yards per attempt once in 2013, in the Big Ten Championship Game against Ohio State. Importantly, Carlos Hyde and Braxton Miller are a little more intimidating than Shaun Wick and Colby Kierkegaard. If you remove the 57-yard run by Wick, then the average drops to 4.2 yards per attempt....but the problem is that 57-yard run happened.

If you're thinking that this might have implications against Nebraska, you are correct! Nebraska RB Ameer Abdullah is an incredible athlete and if there are issues with tackling in open space, Abdullah will exploit them (cough R.J. Williamson cough). Nebraska averaged 6.0 yards per attempt in last year's game; unless there is considerable turnover luck again, MSU will need to improve upon that figure.

Dantonio had a poignant quote from the Sunday teleconference, when asked about where the team is now versus where it was a year ago:

As far as I'm concerned, we need to continue to still prove ourselves. Our reputation right now is built off of last year's success, I think I realize that.

We need to continue to move past these next games and continue to get - like I said before, this is now it starts here. We need to play in the present.

This non-conference slate has yielded more questions than answers in my mind. It appears that the identity of this team has yet to fully form after the defense was so dominant last year. With just three cupcakes and a road game against Oregon to evaluate, it's tough to make any major conclusions about this team just yet. The offense has solidified, but can this defense approach the quality of the 2011-13 defenses? We should know after this week.