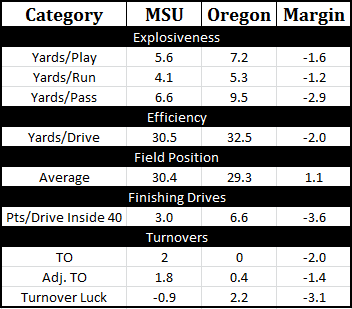 [As always, these are sack-adjusted. There were no irrelevant drives to remove. For more explanation of these factors, check out my JSU breakdown here and/or Bill Connelly's explanation here.]

The good news is that the offense moved the ball well; 5.6 yards per play against the Oregon defense on the road is quite respectable. The offense posted a 5.9 ypp against Stanford in the Rose Bowl, for reference. I wasn't convinced before this game that the offensive tire fire had been totally extinguished (that 14 point game against Minnesota still haunts me a little), but I'm confident about moving the ball now. Here's the graph of the yards per rush and yards per attempt figures since the second half of the Big Ten season in 2013: 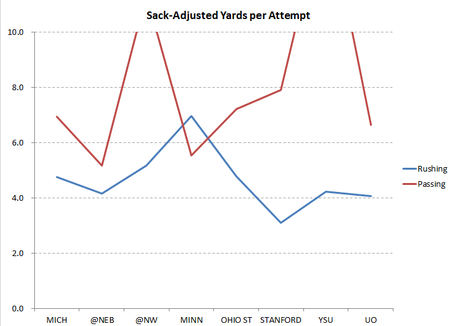 The offense wasn't quite as explosive as they were in the Big Ten title game or the Rose Bowl, but this performance proves those showings weren't anomalous.

The biggest issue was finishing drives. Just 3 points per drive ending inside the 40 is not going to cut it against a clinical Oregon offense averaging 6.6 points per trip. Nine of MSU's 15 drives ended inside Oregon's 40, including the two turnovers. They're at least getting into enemy territory; now the trick is coming away with points.

It seems the offense also chose the wrong time to stall, as the two three-and-outs late in the third quarter led to Oregon's offensive momentum snowballing and putting the game out of reach. Ugh.

Defensively, these are the highest averages per play and per pass attempt since KJ started collecting this data in 2012. And not only was Oregon explosive, but they were more efficient than MSU as well on a per-drive basis. This is not the way to upset a top-5 team on the road.

The lack of opportunities for turnovers is frustrating, as MSU defenders only got their hands on two of Marcus Mariota's passes. MSU got a little unlucky in the turnover department, but Oregon generated more chances for themselves and deserved the edge.

It's hard to know how much of the defense's trouble is attributable to youth or Oregon's offense. Until proven otherwise, I'm going to assume this defensive performance was anomalous and we won't see another like it this year.

Another bright spot was special teams, especially on kickoffs. Kevin Cronin and RJ Shelton both did a great job of giving MSU a field position advantage. Strangely, this advantage varied drastically by quarter:

The field position advantage in the second quarter was quite helpful in establishing the lead. Unfortunately, the #SadlerForHeisman watch took another hit, as Sadler only averaged 42.7 yards per punt (though he did make a great tackle). This battle probably needed to be won more convincingly for MSU to counteract the advantages in other categories.

Assuming the defensive performance was a blip and not a trend, the solidification of the offensive improvement is encouraging. If this game was a referendum on the progress of the program, we know that it isn't quite at the "road upset against top-5 team" level just yet. But the Big Ten is clearly there for the taking, and you have to figure MSU is the favorite, even after an early non-conference loss. I think we can live with that.