Examining the fine line between great success and mind-numbing mediocrity

Share All sharing options for: Mining the Box Score: Mind the narrative

So I'm making like Bill Lumbergh and playing catch up. I'm going to dump some data on you, with minimal commentary up until the end. I still haven't seen the entire Wisconsin game. I was, however, able to watch the winning touchdown on my IPad using the crappy WiFi connection at the TGIF in the Atlanta airport (#SpartansWill). 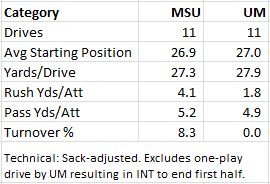 Basically a dead-even game statistically. MSU was more effective rushing the ball, but that was a function of guys other than Le'Veon Bell picking up some big gains--Mike Sadler, most prominently. MSU's turnover (an Andrew Maxwell interception) and Brendan Gibbons' field goal kicking perfection helped pushed Michigan over the top (not that you can't write some massive narrative about a two-point home win if you really put your mind to it).

Mini-box for the game we'd rather talk about (big box): 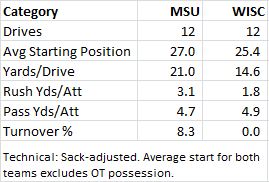 So hideous yet so beautiful all at the same time. I fully endorse Dan's posting of tDOJ, but I would have gone this direction myself:

That's as good a non-turnover-generating defensive performance as you're going to get, further solidifying the fact this defense is, in fact, good enough for a national contending team. For the season, MSU is holding opponents to 3.7 yards per rush and 5.1 yards per pass attempt. The FEI ratings rank the Spartan defense as the best in the country.

The offense is, of course, another story. This game dragged MSU's season averaged down to 4.1 yards per rush and 5.7 yards per pass attempt. Once again, we had the silver lining of the passing attack showing flashes of great potential; this time those flashes were enough to put MSU ahead at the final whistle. As Chris and others have noted, the question is why the coaching staff isn't going pass-first at this point, as the offense has pretty consistently moved the ball when the tempo is picked up and Maxwell has a chance to get into a rhythm. Le'Veon Bell is versatile enough that you can make him a threat in any offensive setup. I'd compare it to pushing the tempo on the basketball court even when your best player, Draymond Green, is a power forward.

After lagging somewhat in the disruption department in the first three Big Ten games, the defense has picked it up considerably in the last two games. They're still not forcing a lot of turnovers, but they're making a lot more tackles behind the line of scrimmage.

The offense, meanwhile, can most charitably be described as "wildly erratic." The number of disruptive plays made by the Michigan defense was actually quite low considering the late-breaking Dan France injury (caveat: the official scorer didn't award any QB hurries for either team in that game). Wisconsin was much more successful in disrupting the MSU offense. Overall, the numbers are better than you'd expect for a team that's had as many offensive line injuries as this one has. But I think they probably hide the facts that (1) MSU has a running back who can wizard his way back to the line of scrimmage, but not much further when there's no hole to run through, and (2) Maxwell is probably rushing through his progressions too quickly because he knows the pocket's not going to hold up very long.

Elsewhere in offensive erraticness, the offense is now responsible for 29 of MSU's total of 52 penalties on the season. The defense has contributed 16 to the total, and 7 penalties have occurred on special teams.

Note that the major parts of the game these charts don't cover--fumbles and special teams--are often key determinants in any particular game but are also the most random parts of the football equation. With the exception of kickoff and punting average, I'm not convinced even a full season of data gets you a statistically significant sample unless you've got a real game changer in one of those areas on your roster.

That philosophy hasn't been all that useful this season. It doesn't take a lot of advanced analysis to figure out that this MSU team has a very, very good defense and very, very mediocre offense. The net result is that games have turned on more random factors. MSU has gotten almost no big plays out of its special teams (with even the punt block on Saturday ultimately gaining the team nothing but a little field position). Dan Conroy entered the season having converted 19 of 21 career field goal attempts between the distances of 30 and 49 yards. This season, he's just 7 for 13 in that range. It's hard to argue that's an effort or coaching failure; I suspect he's doing everything during the week the same way he did it the two previous seasons.

On the other side of the randomness equation, you have this:

Opponents are 17 for 17 on their FG tries, making MSU the worst in the nation both at manipulating the weather and the psyches of kickers.

A football team can try to block an opponents' field goal attempts, but this isn't far off from a basketball team having its opponents make 100% of their free throw attempts. That's particularly damaging in light of this:

MSU opponents making FG in 60 percent of red zone trips. No. 2 is Maryland at 45 percent. Dayum.

The defense is playing superbly even when opponents get to the red zone, but it's not reducing opponents' scoring as much as you'd expect. One fewer made field goal in two of the three Big Ten losses, and MSU would be in great position to get to the BTCG again and the narrative on this team would be completely different: a gritty, defense-led Rose Bowl contender with a game manager-type who avoids making big mistakes at quarterback. (More-favorable-luck thing I'm ignoring: opponents have only scooped up 4 of MSU's 14 fumbles on the season.)

Now, that's not to say that that narrative would be more correct than the current one: a young-but-promising team that's failed to develop on offense due to injuries and questionable play-calling. Fundamentally, nothing would be different about this team. But it does speak to the very fine line between success and failure if you're not, say, Alabama. The fact that a prime chance to get to the Rose Bowl has almost certainly slipped through our fingers is hugely disappointing, but the the future doesn't look so bad either:

The counterpoint to that argument is that with the Legends Division crown effectively out of reach and a bowl game pretty well assured now. Everything should be about preparing the offense for 2013. Next year MSU has a stupid favorable schedule skipping Wisky, PSU and OSU and getting Indiana, Purdue and Illinois. If you want to win the Big Ten MSU's schedule is about as favorable as it can be.

/caught up and then some

/strolls back to office with cup of coffee